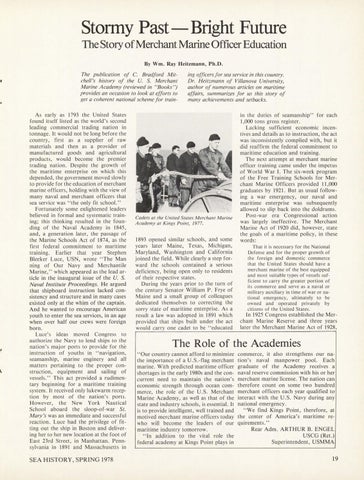 The publication of C. Brad/ord Mitchell's history of the U. S. Merchant Marine Academy (reviewed in "Books") provides an occasion to look at efforts to get a coherent national scheme for trainAs early as 1793 the United States found itself listed as the world 's second leading commercial trading nation in tonnage. It would not be long before the country, first as a supplier of raw materials and then as a provider of manufactured goods and agricultural products, would become the premier trading nation. Despite the growth of the maritime enterprise on which this depended, the government moved slowly to provide for the education of merchant marine officers, holding with the view of many naval and merchant officers that sea service was "the only fit school. " Fortunately some enlightened leaders believed in formal and systematic training; this thinking resulted in the founding of the Naval Academy in 1845 , and, a generation later, the passage of the Marine Schools Act of 1874, as the first federal commitment to maritime trammg. Earlier that year Stephen Bleeker Luce, USN, wrote "The Man ning of Our Navy and Merchantile Marine, " which appeared as the lead article in the inaugural issue of the U. S. Naval Institute Proceedings. He argued that shipboard instruction lacked consistency and structure and in many cases existed only at the whim of the captain . And he wanted to encourage American youth to enter the sea services, in an age when over half our crews were foreign born . Luce's ideas moved Congress to authorize the Navy to lend ships to the nation' s major ports to provide for the instruction of yo uths in "navigation, seamanship, marine enginery and all matters pertaining to the proper construction, equipment and sailing of vessels." This act provided a rudimentary beginning for a maritime training system. It received only lukewarm reception by most of the nation' s ports. However, the New York Nautical School aboard the sloop-of-war St. Mary's was an immediate and successful reaction. Luce had the privilege of fitting out the ship in Boston and delivering her to her new location at the foot of East 23rd Street, in Manhattan. Pennsylvania in 1891 and Massachusetts m

ing officers for sea service in this country. Dr. Heitzmann of Villanova University, author of numerous articles on maritime affairs, summarizes for us this story of many achievements and setbacks.

1893 opened similar schools, and some years later Maine, Texas, Michigan, Maryland, Washington and California joined the field. While clearly a step forward the schools contained a serious deficiency, being open only to residents of their respective states. During the years prior to the turn of the century Senator William P. Frye of Maine and a small group of colleagues dedicated themselves to correcting the sorry state of maritime enterprise. As a result a law was adopted in 1891 which provided that ships built under the act would carry one cadet to be "educated

in the duties of seamanship " for each 1,000 tons gross register. Lacking sufficient economic incentives and details as to instruction, the act was inconsistently complied with, but it did reaffirm the federal commitment to maritime ed ucation and training. The next attempt at merchant marine officer training came under the impetus of World War I. The six-week program of the Free Training Schools for Merchant Marine Officers provided 11,000 graduates by 1921. But as usual following a war emergency, our naval and maritime enterprise was subsequently allowed to slip back into the doldrums. Post-war era Congressional action was largely ineffective. The Merchant Marine Act of 1920 did , however, state the goals of a maritime policy, in these words: That it is necessary for the National Defense and for the proper growth of the foreign and domestic co mmerce that the United States should have a merchant marine of the best equipped and most suitable types of vessels suffi cient to carry the greater portion of it s commerce and serve as a naval or military a uxi li ary in time of war or national emergency, ultimately to be owned and operated privately by citizens of th e United States.

The Role of the Academies "Our country cannot afford to minimize the importance of a U .S.-flag merchant marine. With predicted maritime officer shortages in the early 1980s and the concurrent need to maintain the nation 's economic strength through ocean commerce, the role of the U.S. Merchant Marine Academy, as well as that of the state and industry schools, is essential. It is to provide intelligent, well trained and motived merchant marine officers today who will become the leaders of our maritime industry tomorrow. "In addition to the vital role the federal academy at Kings Point plays in

commerce, it also strengthens our nation's naval manpower pool. Each graduate of the Academy receives a naval reserve commission with his or her merchant marine license. The nation can therefore count on some two hundred merchant officers each year qualified to interact with the U.S. Navy during any national emergency. "We find Kings Point, therefore, at the center of America's maritime requirements." Rear Adm. ARTHUR B. ENGEL USCG (Ret.) Superintendent, USMMA