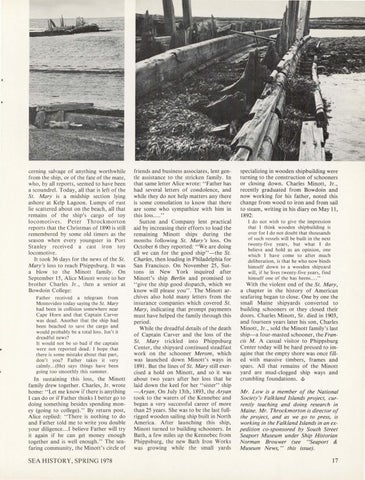 cerning salvage of anything worthwhile from the ship, or of the fate of the mate, who, by all reports, seemed to have been a scoundrel. Today, all that is left of the St. Mary is a midship section lying ashore at Kelp Lagoon. Lumps of rust lie scattered about on the beach, all that remains of the ship&#39;s cargo of toy locomotives . Peter Throckmorton reports that the Christmas of 1890 is still remembered by some old timers as the season when every youngster in Port Stanley received a cast iron toy locomotive . It took 36 days for the news of the St. Mary&#39;s loss to reach Phippsburg . It was a blow to the Minott family. On September 15, Alice Minott wrote to her brother Charles Jr., then a senior at Bowdoin College: Father received a telegram from Montevideo today saying the St. Mary had been in collision somewhere near Cape Horn and that Captain Carver was dead. Another that the ship had been beached to save the cargo and would probably be a total loss. Isn&#39;t it dreadful news? It would not be so bad if the captain were not reported dead. I hope that there is some mistake about that part, don &#39; t you? Father takes it very calmly . .. (He) says things have been going too smoothl y this summ er.

In sustaining this loss, the Minott family drew together. Charles, Jr. wrote home: &#39;&#39;Let me know iÂ°f there is anything I can do or if Father thinks I better go to doing something besides spending money (going to college).&quot; By return post, Alice replied: &quot;There is nothing to do and Father told me to write you double your diligence ... I believe Father will try it again if he can get money enough together and is well enough .&quot; The seafaring community, the Minott&#39; s circle of

friends and business associates, lent gentle assistance to the stricken family. In that same letter Alice wrote: &quot;Father has had several letters of condolence, and while they do not help matters any there is some consolation to know that there are some who sympathize with him in this loss .... &quot; Sutton and Company lent practical aid by increasing their efforts to load the remaining Minott ships during the months following St. Mary&#39;s loss. On October 6 they reported: &quot;We are doing all we can for the good ship&quot; -the St. Charles, then loading in Philadelphia for San Francisco. On November 25, Suttons in New York inquired after Minott&#39;s ship Berlin and promised to &quot;give the ship good dispatch, which we know will please you&quot;. The Minott archives also hold many letters from the insurance companies which covered St. Mary, indicating that prompt payments must have helped the family through this period. While the dreadful details of the death of Captain Carver and the loss of the St. Mary trickled into Phippsburg Center, the shipyard continued steadfast work on the schooner Merom, which was launched down Minott&#39;s ways in 1891. But the lines of St. Mary still exercised a hold on Minott, and so it was about two years after her loss that he laid down the keel for her &quot;sister&quot; ship -Aryan. On July 13th, 1893, the Aryan took to the waters of the Kennebec and began a very successful career of more than 25 years. She was to be the last fullrigged wooden sailing ship built in North America. After launching this ship, Minott turned to building schooners. In Bath, a few miles up the Kennebec from Phippsburg, the new Bath Iron Works was growing while the small yards

specializing in wooden shipbuilding were turning to the construction of schooners or closing down. Charles Minott, Jr., recently graduated from Bowdoin and now working for his father, noted this change from wood to iron and from sail to steam, writing in his diary on May 11, 1892: I do not wish to give the impression that I think wooden shipbuilding is over for I do not doubt that thousands of such vessels will be built in the next twent y-five years, but what I do believe and hold as an opinion , one which I have come to after muc h deliberation, is that he who now binds him self down to a wooden shipyard will, if he lives twenty-five years, find himself one of the has beens .... &quot;

With the violent end of the St. Mary, a chapter in the history of American seafaring began to close. One by one the small Maine shipyards converted to building schooners or they closed their doors . Charles Minott, Sr. died in 1903, and fourteen years later his son, Charles Minott, Jr., sold the Minott family&#39;s last ship-a four-masted schooner, the Francis M. A casual visitor to Phippsburg Center today will be hard pressed to imagine that the empty shore was once filled with massive timbers, frames and spars. All that remains of the Minott yard are mud-clogged ship ways and crumbling foundations . .t

Mr. Low is a member of the National Society&#39;s Falkland Islands project, currently teaching and doing research in Maine. Mr. Throckmorton is director of the project, and as we go to press, is working in the Falkland Islands in an expedition co-sponsored by South Street Seaport Museum under Ship Historian Norman Brouwer (see &quot;Seaport &amp; Museum News, &quot; this issue).