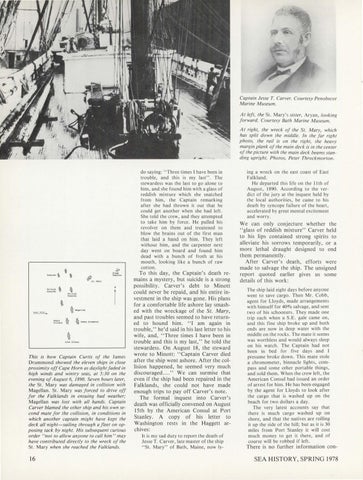 Captain Jesse T. Carver. Courtesy Penobscot Marine Museum. At left, the St. Mary &#39;s sister, Aryan, looking forward. Courtesy Bath Marine Museum. At right, the wreck of the St. Mary, which has split down the middle. In the far right photo, the rail is on the right, the heavy margin plank of the main deck is in the center of the picture with the main deck beams standing upright. Photos, Peter Throckmorton. do saying: &quot; Three times I have been in trouble, and thi s is my last&quot; . The stewardess was the last to go alone to him, and she found him with a glass of reddish mixture which she snatched from him, the Captain remarking after she had thrown it out that he cou ld get another when she had left. She told the crew, and they attempted to take him by force. He pulled his revolver on them and treatened to blow the brains out of the fir st man that laid a hand on him. They left without him, and the carpenter next day went on board and found him dead with a bunch of froth at hi s mouth , looking like a bunch of raw cotton.

This is how Captain Curtis of the James Drummond showed the eleven ships in close proximity off Cape Horn as daylight faded in high winds and wintry seas, at 5:30 on the evening of August 6, 1890. Seven hours later, the St. Mary was damaged in collision with Magellan. St. Mary was forced to drive off for the Falklands in ensuing bad weather; Magellan was lost with all hands. Captain Carver blamed the other ship and his own second mate for the collision, in conditions in which another captain might have kept the deck all night-sailing through a fleet on opposing lack by night. His subsequent curious order &quot;not to allow anyone lo call him&quot; may have contributed directly to the wreck of the St. Mary when she reached the Falklands.

To this day, the Captain&#39;s death remains a mystery, but suicide is a strong possibility. Carver&#39;s debt to Minott cou ld never be repaid, and his entire investment in the ship was gone. His plans for a comfortable life as hore lay smashed with the wreckage of the St. Mary, and past troub les seemed to have returned to hound him. &quot;I am again in trouble,&quot; he&#39;d said in his last letter to his wife, and, &quot;Three times I have been in trouble and this is my last,&quot; he told the stewardess . On August 18, the steward wrote to Minott: &quot;Captain Carver died after the sh ip went ashore. After the collision happened, he seemed very much discouraged .... &quot; We can surmise that even if the ship had been repaired in the Falklands, she could not have made enough trips to pay off Carver&#39;s note. The formal inquest into Carver&#39;s death was officia lly convened on August IS th by the American Consul at Port Stanley. A copy of his letter to Washington rests in the Haggett archives : It is my sad duty to report the dea th of Jesse T. Carver, late master of the ship &quot;St. Mary &quot; of Bath, Maine, now ly-

in g a wreck on the east coast of Eas t Fa lkland. He departed this life on the 11th of Au gust, 1890. According to the verdict of the jury at the inquest held by th e local authorities, he came to hi s death by syncope failure of the heart , accelerated b y grea t mental excitement and worry.

We can only conjecture whether the &quot;glass of reddish mixture&quot; Carver held to his lips contained strong spirits to alleviate his sorrows temporari ly, or a more lethal draught designed to end them permanently. After Carver&#39;s death, efforts were made to salvage the sh ip . The unsigned report quoted earlier gives us some details of this work: The ship laid eight da ys before anyon e went to save cargo . Then Mr. Cobb , agent for Lloyds, made arrangement s with himself for 40% salvage, and sent two of his schooners. They made one trip each when a S .E. gale came on , and thi s fine ship broke up and both end s are now in deep water with the middle on the rock s. The mate it seem s was worthless and wou ld always sleep on hi s watch. The Captain had not been in bed for five days and I presume broke down. This mate stole a chronometer , binnacle lights, com pass and some other portable thin gs , and sold them . When the crew left, the American Consul had iss ued an order of arrest for him . He has been engaged by the agent for Lloyds to look after the cargo that is washed up on the beach for two dollars a day. The very latest accounts say that there is much cargo washed up on shore, and that the natives are roll ing it up the side of the hill; but as it is 30 miles from Port Stanley it will cost much money to get it there , and of course will be robbed if left.

There is no further information con-