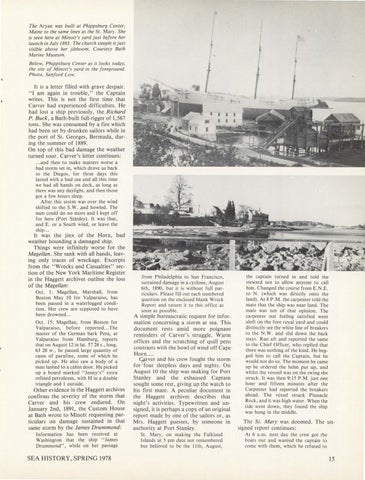 The Aryan was built at Phippsburg Center, Maine to the same lines as the St. Mary. She is seen here at Minott&#39;s yard just before her launch in July 1893. The church steeple is just visible above her jibboom. Courtesy Balh Marine Museum. Below, Phippsburg Center as it looks today, the site of Minott&#39;s yard in the foreground. Photo, Sanford Low. It is a letter filled with grave despair. &quot;I am again in trouble,&quot; the Captain writes. This is not the first time that Carver had experienced difficulties. He had lost a ship previously, the Richard P. Buck, a Bath-built full-rigger of 1,567 tons. She was consumed by a fire which had been set by drunken sailors while in the port of St. Georges, Bermuda, during the summer of 1889. On top of this bad damage the weather turned sour. Carver&#39;s letter continues: ... and then to make matters worse a bad storm set in, which drove us back to the Diegos, for three days this lasted with a bad sea and all this time we had all hands on deck, as long as there was any daylight, and then those got a few hours sleep. After this storm was over the wind shifted to the S. W. and howled. The men could do no more and I kept off for here (Port Stanley). It was that, and E. or a South wind, or leave the ship ... It was the jinx of the Horn, bad

weather hounding a damaged ship. Things were infinitely worse for the Magellan. She sank with all hands, leaving only traces of wreckage. Excerpts from the &quot;Wrecks and Casualties&quot; section of the New York Maritime Register in the Haggett archives outline the loss of the Magellan: Oct. I: Magellan, Marshall, from Boston May JO for Valparaiso, has been passed in a waterlogged condition. Her crew are supposed to have been drowned ...

from Philadelphia to San Francisco, sustained damage in a cyclone, August 6th, 1890, but it is without full particulars. Please fill out each numbered question on the enclosed blank Wreck Report and return it to this office as soon as possible.

the captain turned in and told the steward not to allow anyone to call him. Changed the course from E.N.E. to N. (which was directly onto the land). At 8 P .M. the carpenter told the mate that the ship was near land. The mate was not of that opinion. The carpenter not feeling satisfied went aloft on the fore royal yard and could distinctly see the white line of breakers to the N. W. and slid down the back stays. Ran aft and reported the same to the Chief Officer, who replied that there was nothing of the kind. He begged him to call the Captain, but he would not do so. The moment he came up he ordered the helm put up, and whilst the vesssel was on the swing she struck. It was then 9:15 P.M. just one hour and fifteen minutes after the Carpenter had reported the breakers ahead. The vessel struck Pinnacle Rock, and it was high water. When the tide went down, they found the ship was hung in the middle.

Other evidence in the Haggett archives confirms the severity of the storm that Carver and his crew endured. On January 2nd, 1891, the Custom House at Bath wrote to Minott requesting particulars on damage sustained in that same storm by the James Drummond:

A simple bureaucratic request for information concerning a storm at sea. This document rests amid more poignant reminders of Carver&#39;s struggle. Warm offices and the scratching of quill pens contrasts with the howl of wind off Cape Horn .... ~rver and his crew fought the storm for four sleepless days and nights. On August 10 the ship was making for Port Stanley and the exhaused Captain sought some rest, giving up the watch to his first mate. A peculiar document in the Haggett archives describes that night&#39;s activities. Typewritten and unsigned, it is perhaps a copy of an original report made by one of the sailors or, as Mrs. Haggett guesses, by someone in authority at Port Stanley.

The St. Mary was doomed. The unsigned report continues:

Information has been received at Washington that the ship &quot;James Drummond&quot;, while on her passage

St. Mary, on making the Falkland Islands at 5 pm date not remembered but believed to be the 11th, August,

At 6 a.m. next day the crew got the boats out and wanted the captain to come with them, which he refused to

Oct. 15: Magellan, from Boston for Valparaiso, before reported ... The master of the German bark Pera, at Valparaiso from Hamburg, reports that on August 12 in lat. 57 28 s., long. 63 28 w., he passed large quantity of cases of parafine, some of which he picked up. He also saw a body of a man lashed to a cabin door. He picked up a board marked &quot;Jenny&#39;s&quot; extra refined petroleum, with H in a double triangle and l outside.