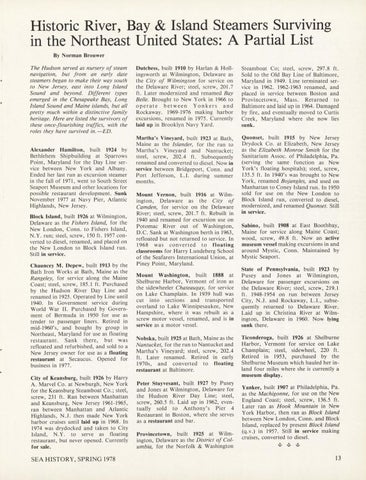 The Hudson served as nursery of steam navigation, but from an early date steamers began to make their way south to New Jersey, east into Long Island Sound and beyond. Different types emerged in the Chesapeake Bay, Long Island Sound and Maine islands, but all pretty much within a distinctive family heritage. Here are listed the survivors of these once-flourishing traffics, with the roles they have survived in.-ED. Alexander Hamilton, built 1924 by Bethlehem Shipbuilding at Sparrows Point, Maryland for the Day Line service between New York and Albany. Ended her last run as excursion steamer in the fall of 1971, went to South Street Seaport Museum and other locations for possible restaurant development. Sunk November 1977 at Navy Pier, Atlantic Highlands, New Jersey . Block Island, built 1926 at Wilmington, Delaware as the Fishers Island, for the New London, Conn. to Fishers Island, N.Y. run; steel, screw, 150 ft. 1957 converted to diesel, renamed, and placed on the New London to Block Island run . Still in service. Chauncey M. Depew, built 1913 by the Bath Iron Works at Bath, Maine as the Rangeley, for service along the Maine Coast; steel, screw, 185 . I ft. Purchased by the Hudson River Day Line and renamed in 1925 . Operated by Line until 1940. In Government service during World War II. Purchased by Government of Bermuda in 1950 for use as tender to passenger liners. Retired in mid-1960&#39;s, and bought by group in Northeast, Maryland for use as floating restaurant. Sank there, but was refloated and refurbished, and sold to a New Jersey owner for use as a floating restaurant at Secaucus. Opened for business in 1977. City of Keansburg, built 1926 by Harry A. Marvel Co. at Newburgh, New York for the Keansburg Steamboat Co.; steel, screw, 231 ft. Ran between Manhattan and Keansburg, New Jersey 1961-1965, ran between Manhattan and Atlantic Highlands, N .J . then made New York harbor cruises until laid up in 1968. In 1974 was drydocked and taken to City Island, N. Y. to serve as floating restaurant, but never opened. Currently for sale.

Dutchess, built 1910 by Harlan &amp; Hollingsworth at Wilmington, Delaware as the City of Wilmington for service on the Delaware River; steel, screw, 201.7 ft. Later modernized and renamed Bay Belle. Brought to New York in 1966 to operate between Yonkers and Rockaway. 1969-1976 making harbor excursions, renamed in 1975. Currently laid up in Brooklyn Navy Yard.

Steamboat Co; steel, screw, 297.8 ft. Sold to the Old Bay Line of Baltimore, Maryland in 1949. Line terminated service in 1962. 1962-1963 renamed, and placed in service between Boston and Provincetown, Mass. Returned to Baltimore and laid up in 1964. Damaged by fire , and eventually moved to Curtis Creek, Maryland where she now lies sunk.

Martha&#39;s Vineyard, built 1923 at Bath, Maine as the Islander, for the run to Martha&#39;s Vineyard and Nantucket; steel, screw, 202.4 ft. Subsequently renamed and converted to diesel. Now in service between Bridgeport , Conn. and Port Jefferson, L. l. during summer months .

Quonset, built 1915 by New Jersey Drydock Co. at Elizabeth, New Jersey as the Elizabeth Monroe Smith for the Sanitarium Assoc. of Philadelphia, Pa. (serving the same function as New York&#39;s floating hospitals); steel, screw, 135 .5 ft. In 1940&#39;s was brought to New York, renamed Bojangles, and used on Manhattan to Coney Island run. In 1950 sold for use on the New London to Block Island run, converted to diesel, modernized, and renamed Quonset. Still in service.

Mount Vernon, built 1916 at Wilmington, Delaware as the City of Camden, for service on the Delaware River; steel, screw, 201.7 ft. Rebuilt in 1940 and renamed for excursion use on Potomac River out of Washington, D.C. Sank at Washington berth in 1963, refloated but not returned to service. In 1968 was converted to floating classrooms for Harry Lundeberg School of the Seafarers International Union, at Piney Point, Maryland. Mount Washington, built 1888 at Shelburne Harbor, Vermont of iron as the sidewheeler Chateaugay, for service on Lake Champlain. In 1939 hull was cut into sections and transported overland to Lake Winnipesaukee, New Hampshire, where it was rebuilt as a screw motor vessel, renamed, and is in service as a motor vessel. Nobska, built 1925 at Bath, Maine as the

Nantucket, for the run to Nantucket and Martha&#39;s Vineyard; steel, screw, 202.4 ft. Later renamed . Retired in early 1970s, and converted to floating restaurant at Baltimore. Peter Stuyvesant, built 1927 by Pusey and Jones at Wilmington, Delaware for the Hudson River Day Line; steel, screw, 260.5 ft. Laid up in 1962, eventually sold to Anthony&#39;s Pier 4 Restaurant in Boston, where she serves as a restaurant and bar. Provincetown, built 1925 at Wilmington, Delaware as the District of Columbia, for the Norfolk &amp; Washington

Sabino, built 1908 at East Boothbay, Maine for service along Maine Coast; wood, screw, 49.8 ft. Now an active museum vessel making excursions in and around Mystic, Conn. Maintained by Mystic Seaport. State of Pennsylvania, built 1923 by Pusey and Jones at Wilmington, Delaware for passenger excursions on the Delaware River; steel, screw, 219.1 ft. 1948-1954 on run between Jersey City, N.J. and Rockaway, L.I., subsequently returned to Delaware River. Laid up in Christina River at Wilmington, Delaware in 1960. Now lying sunk there. Ticonderoga, built 1926 at Shelburne Harbor, Vermont for service on Lake Champlain; steel, sidewheel, 220 ft. Retired in 1953 , purchased by the Shelburne Museum which hauled her inland four miles where she is currently a museum display. Yankee, built 1907 at Philadelphia, Pa. as the Machigonne, for use on the New England Coast; steel, screw, 136.5 ft. Later ran as Hook Mountain in New York Harbor, then ran as Block Island between New London, Conn. and Block Island, replaced by present Block Island (q .v.) in 1957. Still in service making cruises, converted to diesel.