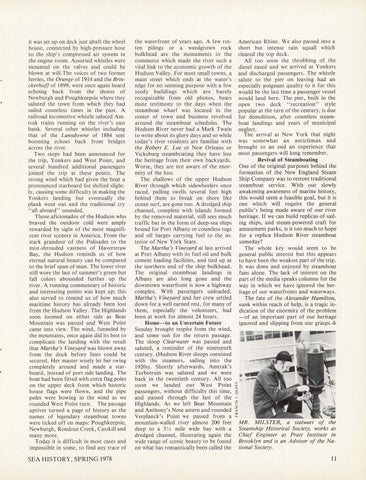 it was set up on deck Just abaft the wheel house, connected by high-pressure hose to the ship&#39;s compressed air system in the engine room. Assorted whistles were mounted on the valves and could be blown at will. The voices of two former ferries, the Orange of 1914 and the Brinckerhoff of 1899, were once again heard echoing back from the shores of Newburgh and Poughkeepsie where they saluted the town from which they had sailed countless times in the past. A railroad locomotive whistle saluted Amtrak trains running on the river&#39;s east bank. Several other whistles including that of the Lansdowne of 1884 sei:it booming echoes back from bridges across the river. Two stops had been announced for the trip, Yonkers and West Point, and several hundred additional passengers joined the trip at these points. The strong wind which had given the boat a pronounced starboard list shifted slightly, causing some difficulty in making the Yonkers landing but eventually the plank went out and the traditional cry &quot;all aboard&quot; sounded. Those aficionados of the Hudson who braved the outdoor cold were amply rewarded by sight of the most magnificent river scenery in America. From the stark grandeur of the Palisades to the mist-shrouded vastness of Haverstraw Bay, the Hudson reminds us of how eternal natural beauty can be compared to the brief span of man. The lower river still wore the last of summer&#39;s green but fall colors abounded further up the river. A running commentary of historic and interesting points was kept up; this also served to remind us of how much maritime history has already been lost from the Hudson Valley. The Highlands soon loomed on either side as Bear Mountain was passed and West Point came into view. The wind, funneled by the mountains, once again did its best to complicate the landing with the result that Martha&#39;s Vineyard was blown away from the dock before lines could be secured. Her master wisely let her swing completely around and made a starboard, instead of port side landing. The boat had been fitted with extra flag poles on the upper deck from which historic house flags were flown, and the pipe poles were bowing in the wind as we rounded West Point turn. The passage upriver turned a page of history as the names of legendary steamboat towns were ticked off on maps: Poughkeepsie, Newburgh, Rondout Creek, Catskill and many more. Today it is difficult in most cases and impossible in some, to find any trace of

the waterfront of years ago. A few rotten pilings or a weedgrown rock bulkhead are the monuments to the commerce which made the river such a vital link to the economic growth of the Hudson Valley. For most small towns, a main street which ends at the water&#39;s edge for no seeming purpose with a few seedy buildings which are barely recognizable from old photos, bears mute testimony to the days when the steamboat wharf was located in the center of town and business revolved around the steamboat schedules. The Hudson River never had a Mark Twain to write about its glory days and so while today&#39;s river residents are familiar with the Robert E. Lee or New Orleans or Vicksburg steamboating they have lost the heritage from their own backyards. Worse, they are not aware of the enormity of the loss. The shallows of the upper Hudson River through which sidewheelers once raced, pulling swells several feet high behind them to break on shore like ocean surf, are gone too. A dredged ship channel, complete with islands formed by the removed material, still sees much traffic but in the form of deep-sea ships bound for Port Albany or countless tugs and oil barges carrying fuel to the interior of New York State. The Martha&#39;s Vineyard at last arrived at Port Albany with its fuel oil and bulk cement loading facilities, and tied up at the northern end of the ship bulkhead. The original steamboat landings in Albany are also long gone and the downtown waterfront is now a highway complex. With passengers unloaded, Martha&#39;s Vineyard and her crew settled down for a well earned rest, for many of them, especially the volunteers, had been al work for almost 24 hours. Home-to an Uncertain Future Sunday brought respite from the wind, and some sun for the return passage. The sloop Clearwater was passed and saluted, a reminder of the nineteenth century. (Hudson River sloops coexisted with the steamers, sailing into the 1920s). Shortly afterwards, Amtrak&#39;s Turbotrain was saluted and we were baek in the twentieth century. All too soon we landed our West Point passengers, without difficulty this time, and passed through the last of the Highlands. As we left Bear Mountain and Anthony&#39;s Nose astern and rounded Verplanck&#39;s Point we passed from a mountain-walled river almost 200 feet deep to a 3 Yi mile wide bay with a dredged channel, illustrating again the wide range of scenic beauty to be found on what has romantically been called the

American Rhine. We also passed into a short but intense rain squall which cleared the top deck. All too soon the throbbing of the diesel eased and we arrived at Yonkers and discharged passengers. The whistle salute to the pier on leaving had an especially poignant quality to it for this would be the last time a passenger vessel would land here. The pier, built in the open two deck &quot;recreation&quot; style popular at the turn of the century, is due for demolition, after countless steamboat landings and years of municipal neglect. The arrival at New York that night was somewhat an anticlimax and brought to an end an experience that most passengers will long remember. .Revival of Steamboating One of the original purposes behind the formation of the New England Steam Ship Company was to restore traditional steamboat service. With our slowly awakening awareness of marine history, this would seem a feasible goal, but it is one which will require the general public&#39;s being made aware of our river heritage. If we can build replicas of sailing ships, and steam-powered craft for amusement parks, is it too much to hope for a replica Hudson River steamboat someday? The whole key would seem to be general public interest but this appears to have been the weakest part of the trip. It was done and enjoyed by steamboat fans alone. The lack of interest on the part of the media speaks columns for the way in which we have ignored the heritage of our waterfronts and waterways. The fate of the Alexander Hamilton, sunk within reach of help, is a tragic indication of the enormity of the problem -of an important part of our heritage ignored and slipping from our grasps.w

MR. MILSTER, a stalwart of the Steamship Historical Society, works as Chief Engineer at Pratt Institute in Brooklyn and is an Advisor of the National Society.