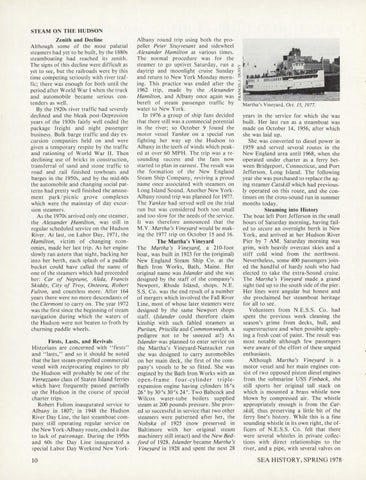 STEAM ON THE HUDSON Zenith and Decline Although some of the most palatial steamers had yet to be built, by the 1880s steamboating had reached its zenith. The signs of this decline were difficult as yet to see, but the railroads were by this time competing seriously with river traffic; there was enough for both until the period after World War I when the truck and automobile became serious contenders as well. By the 1920s river traffic had severely declined and the bleak post-Depression years of the 1930s fairly well ended the package freight and night passenger business. Bulk barge traffic and day excursion companies held on and were given a temporary respite by the traffic and rationing of World War II. Then declining use of bricks in construction, transferral of sand and stone traffic to road and rail finished towboats and barges in the 1950s, and by the mid-60s the automobile and changing social patterns had pretty well finished the amusement park / picnic grove complexes which were the mainstay of day excursion steamers. As the 1970s arrived only one steamer, the Alexander Hamilton, was still in regular scheduled service on the Hudson River. At last, on Labor Day, 1971, the Hamilton, victim of changing economies, made her last trip. As her engine slowly ran astern that night, backing her into her berth, each splash of a paddle bucket could have called the name of one of the steamers which had preceeded her: Car of Neptune, Alida, Francis

Skiddy, City of Troy, Onteora, Robert Fulton, and countless more. After 164 years there were no more descendants of the Clermont to carry on. The year 1972 was the first since the beginning of steam navigation during which the waters of the Hudson were not beaten to froth by churning paddle wheels.

Firsts, Lasts, and Revivals Historians are concerned with &quot;firsts&quot; and &quot;lasts,&quot; and so it should be noted that the last steam-propelled commercial vessel with reciprocating engines to ply the Hudson will probably be one of the Verrazzano class of Staten Island ferries which have frequently passed partially up the Hudson in the course of special charter trips. Robert Fulton inaugurated service to Albany in 1807; in 1948 the Hudson River Day Line, the last steamboat company still operating regular service on the New York-Albany route, ended it due to lack of patronage. During the 1950s and 60s the Day Line inaugurated a special Labor Day Weekend New York-

Aibany round trip using both the propeller Peter Stuyvesant and sidewheel Alexander Hamilton at various times. The normal procedure was for the steamer to go upriver Saturday, run a daytrip and moonlight cruise Sunday t:: :i and return to New York Monday morn- 0 ing. This practice was ended after the &quot;&#39;

bereft of steam passenger traffic by water to New York. In 1976 a group of ship fans decided that there still was a commecial potential in the river; so October 9 found the motor vessel Yankee on a special run fighting her way up the Hudson to Albany in the teeth of winds which peaked at over 60 MPH . The trip was a resounding success and the fans now started to plan in earnest. The result was the formation of the New England Steam Ship Company, reviving a proud name once associated with steamers on Long Island Sound. Another New YorkAlbany round trip was planned for 1977. The Yankee had served well on the trial run but was considered both too small and too slow for the needs of the service . It was therefore announced that the M. V. Martha&#39;s Vineyard would be making the 1977 trip on October 15 and 16. The Martha&#39;s Vineyard The Martha&#39;s Vineyard, a 210-foot boat, was built in 1923 for the (original) New England Steam Ship Co. at the Bath Iron Works, Bath, Maine. Her original name was Islander and she was designed by the staff of the company&#39;s Newport, Rhode Island, shops. N.E. S.S. Co. was the end result of a number of mergers which involved the Fall River Line, most of whose later steamers were designed by the same Newport shops staff. (Islander could therefore claim kinship with such fabled steamers as Puritan, Priscilla and Commonwealth, a pedigree not to be sneezed at!) As Islander was planned to enter service on the Martha&#39;s Vineyard-Nantucket run she was designed to carry automobiles on her main deck, the first of the company&#39;s vessels to be so fitted. She was engined by the Bath Iron Works with an open-frame four-cylinder tripleexpansion engine having cylinders 16 &quot;x 26&quot; by 30&quot;x 30&quot;x 24&quot;. Two Babcock and Wilcox water-tube boilers supplied steam at 200 pounds pressure. She proved so successful in service that two other steamers were patterned after her, the Nobska of 1925 (now preserved in Baltimore with her original steam machinery still intact) and the New Bedford of 1928. Islander became Martha&#39;s Vineyard in 1928 and spent the next 28

years in the service for which she was built. Her last run as a steamboat was made on October 14, 1956, after which she was laid up. She was converted to diesel power in 1959 and served several routes in the New England area until 1968, when she operated under charter as a ferry between Bridgeport, Connecticut, and Port Jefferson, Long Island. The following year she was purchased to replace the aging steamer Catskill which had previously operated on this route, and she continues on the cross-sound run in summer months today. Steaming into History The boat left Port Jefferson in the small hours of Saturday morning, having failed to secure an overnight berth in New York, and arrived at her Hudson River Pier by 7 AM. Saturday morning was grim, with heavily overcast skies and a stiff cold wind from the northwest. Nevertheless, some 400 passengers joined the handful of hardy souls who had elected to take the extra-Sound cruise . The Martha&#39;s Vineyard made .a grand sight tied up to the south side of the pier. Her lines were angular but honest and she proclaimed her steamboat heritage for all to see. Volunteers from N.E.S.S. Co. had spent the previous week cleaning the season&#39;s grime from decks, hull, and superstructure and when possible applying a fresh coat of paint. The result was most notable although few passengers were aware of the effort of these unpaid enthusiasts. Although Martha&#39;s Vineyard is a motor vessel and her main engines consist of two opposed piston diesel engines from the submarine USS Finback, she still sports her original tall stack on which is mounted a brass whistle now blown by compressed air. The whistle appropriately enough is from the Catskill, thus preserving a little bit of the ferry line&#39;s history. While this is a fine sounding whistle in its own right, the officers of N .E.S.S. Co. felt that there were several whistles in private collections with direct relationships to the river, and a pipe, with several valves on