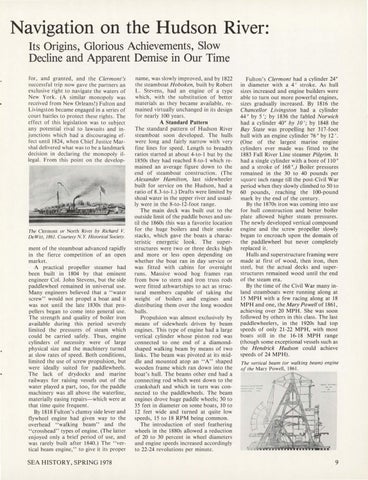 Navigation on the Hudson River: Its Origins, Glorious Achievements, Slow Decline and Apparent Demise in Our Time for, and granted, and the Clermont&#39;s successfu l trip now gave the partners an exclusive right to navigate the waters of New York. (A sim ilar monopoly was received from New Orleans!) Fulton and Livingston became engaged in a series of court battles to protect these rights. The effect of this legislation was to subject any potential rival to lawsu its and injunctions which had a discouraging effect until 1824, when Chief Justice Marshal delivered what was to be a landmark decision in declaring the monopoly illegal. From this point on the develop-

ment of the steamboat advanced rapidly in the fierce competition of an open market. A practical propeller steamer had been built in 1804 by that eminent engineer Col. John Stevens, but the side paddlewheel remained in universal use. Many engineers believed that a &quot;water screw&quot; would not propel a boat and it was not until the late 1830s that propellers began to come into general use. The strength and quality of boiler iron available during this period severely limited the pressures of steam which could be carried safely. Thus, engine cylinders of necessity were of large physical size and the machinery turned at slow rates of speed. Both conditions, limited the use of screw propulsion, but were ideally suited for paddlewheels . The lack of drydocks and marine railways for raising vessels out of the water played a part, too, for the paddle machinery was all above the waterline, materially easing repairs-which were at that time quite frequent. By 1818 Fulton&#39;s clumsy side lever and flywheel engine had given way to the overhead &quot;walking beam&quot; and the &quot;crosshead&quot; types of engine. (The latter enjoyed only a brief period of use, and was rarely built after 1840.) The &quot;vertical beam engine,&quot; to give it its proper

name, was slowly improved, and by 1822 the steamboat Hoboken, built by Robert L. Stevens, had an engine of a type which, with the substitution of better materials as they became available, remained virtually unchanged in its design for nearly 100 years.

A Standard Pattern The standard pattern of Hudson River steamboat soon developed. The hulls were long and fairly narrow with very fine lines for speed. Length to breadth ratios started at about 4-to-I but by the 1850s they had reached 8-to- I which remained an average figure down to the end of steamboat construction . (The Alexander Hamilton, last sidewheeler built for service on the Hudson, had a ratio of 8.3-to-I .) Drafts were limited by shoal water in the upper river and usually were in the 8-to-12-foot range. The main deck was built out to the outside limit of the paddle boxes and until the 1860s this was a favorite location for the huge boilers and their smoke stacks, which gave the boats a characteristic energetic look. The superstructures were two or three decks high and more or less open depending on whether the boat ran in day service or was fitted with cabins for overnight runs. Massive wood hog frames ran from bow to stern and iron truss rods were fitted athwartships to act as structural members capable of taking the weight of boilers and engines and distributing them over the long wooden hulls . Propulsion was almost exclusively by means of sidewheels driven by beam engines. This type of engine had a large vertical cylinder whose piston rod was connected to one end of a diamondshaped walking beam by means of two links. The beam was pivoted at its middle and mounted atop an &quot;A&quot; shaped wooden frame which ran down into the boat&#39;s hull. The beams other end had a connecting rod which went down to the crankshaft and which in turn was connected to the paddlewheels. The beam engines drove huge paddle wheels; 30 to 35 feet in diameter on some boats, 10 to 12 feet wide and turned at quite low speeds, 15 to 18 RPM being common. The introduction of steel feathering wheels in the 1880s allowed a reduction of 20 to 30 percent in wheel diameters and engine speeds increased accordingly to 22-24 revolutions per minute.

Fulton&#39;s Clermont had a cylinder 24&quot; in diameter with a 4&#39; stroke. As hull sizes increased and engine builders were able to turn out more powerful engines, sizes gradually increased. By 1816 the Chancellor Livingston had a cylinder 44&quot; by 5 &#39;; by 1836 the fabled Norwich had a cylinder 40&quot; by JO&#39;; by 1848 the Bay State was propelling her 317-foot hull with an engine cylinder 76&quot; by 12 &#39;. (One of the largest marine engine cylinders ever made was fitted to the 1883 Fall River Line steamer Pilgrim. It had a single cylinder with a bore of 110&quot; and a stroke of 168 &quot;.) Boiler pressures remained in the 30 to 40 pounds per sq uare inch range till the post-Civil War period when they slowly climbed to 50 to 60 pounds, reaching the 100-pound mark by the end of the century. By the 1870s iron was coming into use for hull construction and better boiler plate allowed higher steam pressures. The newly developed vertical compound engine and the screw propeller slowly began to encroach upon the domain of the paddlewheel but never completely replaced it. Hulls and superstructure framing were made at first of wood, then iron, then steel, but the actual decks and superstructures remained wood until the end of the steam era. By the time of the Civil War many inland steamboats were running along at 15 MPH with a few racing along at 18 MPH and one, the Mary Powell of 1861, achieving over 20 MPH. She was soon followed by others in this class. The last paddlewheelers, in the 1920s had top speeds of only 21-22 MPH, with most boats still in the 16-18 MPH range (though some exceptional vessels such as the Hendrick Hudson could achieve speeds of 24 MPH) . The vertical beam (or walking beam) engine of the Mary Powell, 1861. d&#39;