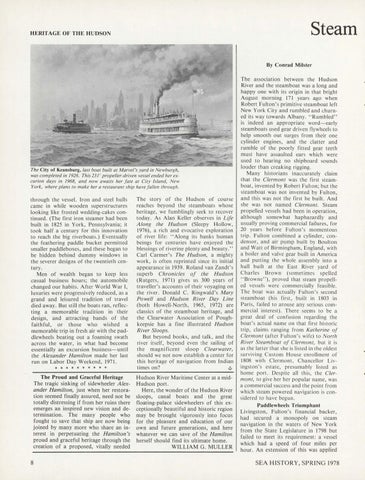 HERITAGE OF THE HUDSON

The City of Keansburg, las/ boar builr at Marvel's yard in Newburgh, was completed in 1926. This 231' propeller-driven vessel ended her excurion days in 1968, and now awaits her fate al City Island, New York, where plans 10 make her a restauranr ship have fallen through.

through the vessel. Iron and steel hulls came in while wooden superstructures looking like frosted wedding-cakes continued. (The first iron steamer had been built in 1825 in York, Pennsylvania; it took half a century for this innovation to reach the big riverboats. ) Eventually the feathering paddle bucket permitted smaller paddleboxes, and these began to be hidden behiHd dummy windows in the severer designs of the twentieth century . Men of wealth began to keep less casual business hours; the automobile changed our habits. After World War I, luxuries were progressively reduced, as a grand and leisured tradition of travel died away. But still the boats ran, reflecting a memorable tradition in their design, and attracting bands of the faithful, or those who wished a memorable trip in fresh air with the paddlewheels beating out a foaming swat h across the water , in what had become essentially an excursion business-until the Alexander Hamilton made her last run on Labor Day Weekend, 1971.

The story of the Hudson of course reaches beyond the steamboats whose heritage , we fumblingly seek to recover today . As Alan Keller observes in Life Along the Hudson (Sleepy Hollow, 1976), a rich and evocative exploration of river life: "Along its banks human beings for centuries have enjoyed the blessings of riverin e plenty and beauty." Carl Carmer's The Hudson, a mighty work, is often reprinted since its initial appearance in 1939. Roland van Zandt's superb Chronicles of the Hudson (Rutgers, 1971) gives us 300 years of traveller' s accounts of their voyaging on the river. Donald C. Ringwald' s Mary Powell and Hudson River Day Line (both Howell-North, 1965, 1972) are classics of the steamboat heritage, and the Clearwater Association of Poughkeepsie has a fine illustrated Hudson

But beyond books, and talk, and the river itself, beyond even the sailing of the magnificent sloop Clearwater, should we not now establish a center for this heritage of navigation from Indian times on? w

The Proud and Graceful Heritage The tragic sinking of sidewheeler Alexander Hamilton, just when her restoration seemed finally assured, need not be totally distressing if from her ruins there emerges an inspired new vision and determination. The many people who fought to save that ship are now being joined by many more who share an interest in perpetuating the Hamilton's proud and graceful heritage through the creation of a proposed, vitally needed

Hudson River Maritime Center at a midHudson port. Here, the wonder of the Hudson River sloops, canal boats and the great floating-palace sidewheelers of this exceptionally beautiful and historic region may be brought vigorously into focus for the pleasure and education of our own and future generations, and here whatever we can save of the Hamilton herself should find its ultimate home . WILLIAM G. MULLER

The association between the Hudson River and the steamboat was a long and happy one with its origin in that bright August morning 171 years ago when Robert Fulton's primitive steamboat left New York City and rumbled and churned its way towards Albany. "Rumbled" is indeed an appropriate word-early steamboats used gear driven flywheels to help smooth out surges from their one cylinder engines, and the clatter and rumble of the poorly fitted gear teeth must have assaulted ears which were used to hearing no shipboard sounds louder than creaking rigging. Many historians inaccurately claim that the Clermont was the first steamboat, invented by Robert Fulton; but the steamboat was not invented by Fulton, and thi s was not the first he built. And she was not named Clermont. Steam propelled vessels had been in operation, although somewhat haphazardly and usually proving commercial failures, for 20 years before Fulton's momentous trip. Fulton combined a cylinder, condenso r, and air pump built by Boulton and Watt of Birmingham, England, with a boiler and valve gear built in America and putting the whole assembly into a hull built at the East River yard of Charles Brown (so metimes spelled "Browne"), proved that steam propelled vessels were commercially feasible. The boat was actually Fulton's second steamboat (his first, built in 1803 in Paris, failed to arouse any serious commercial interest). There seems to be a great deal of confusion regarding the boat's actual name on that first hi storic trip, claims ranging from Katherine of Clermont (aft er Fulton's wife) to North River Steamboat of Clermont, but it is as the latter that she is li sted in the oldest surviving Custom House enrollment of Âˇ 1808 with Clermont, Chancellor Livingsto n' s estate, presumably listed as home port. Despite all this, the Clermont, to give her her popular name, was a commercial success and the point from which steam powered navigation is co nsidered to have begun . Paddlewheels Triumphant Livingston, Fulton's financial backer, had secured a monopoly on steam navigation in the waters of New York from the State Legislature in 1798 but failed to meet its requirement: a vessel which had a speed of four miles per hour. An extension of this was applied