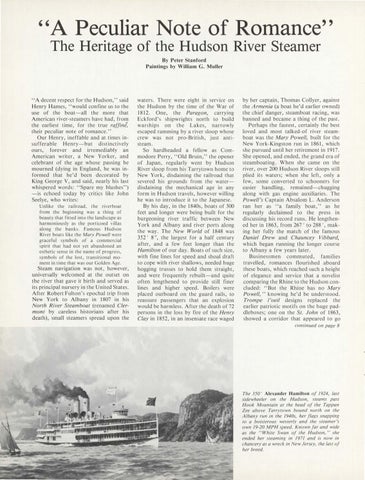 &#39;&#39;A Peculiar Note of Romance&#39;&#39; The Heritage of the Hudson River Steamer By Peter Stanford Paintings by William G. Muller

&quot;A decent respect for the Hudson,&quot; said Henry Hames, &quot;would confine us to the use of the boat-all the more that American river-steamers have had, from the earliest time, for the true raffini, their peculiar note of romance.&quot; Our Henry, ineffable and at times insufferable Henry-but di stinctively ours, forever and irremediably an American writer, a New Yorker, and celebrant of the age whose passing he mourned (dying in England, he was informed that he&#39;d been decorated by King George V, and said, nearly his last whispered words: &quot;Spare my blushes&quot;) -is echoed today by critics like John Seelye, who writes: Unlike the railroad , the riverboat from the beginning was a thing of beauty that fitted into th e land scape as harmoniou sly as the porti coed villas a long the banks. Famous Hud so n River boat s like the Mary Powell were graceful sy mbol s of a commercial spirit that had not yet abandoned an esthetic sense in the name of progress, symbols of the lost , transitional moment in time that was our Go ld en Age.

Steam navigation was not, however, universally welcomed at the outset on the river that gave it birth and served as its principal nursery in the United States. After Robert Fulton&#39;s epochal trip from New York to Albany in 1807 in his North River Steamboat (renamed Clermont by careless historians after his death), small steamers spread upon the

waters. There were eight in se rvice on the Hudson by the time of the War of 1812. One, the Paragon, carrying Eckford&#39;s shipwrights north to build warships on the Lakes, narrowly escaped ramming by a river sloop whose crew was not pro-British, just antisteam. So hardheaded a fellow as Commodore Perry, &quot;Old Bruin,&quot; the opener of Japan, regularly went by Hudson River sloop from his Tarrytown home to New York, disdaining the railroad that severed his grounds from the waterdisdaining the mechanical age in any form in Hudso n travels, however willing he was to introduce it to the Japanese. By his day, in the 1840s, boats of 300 feet and longer were being built for the burgeoning river traffic between New York and Albany and river ports along the way. The New World of 1848 was 352 &#39; 8&quot;, the largest for a half century after, and a few feet longer than the Hamilton of our day. Boats of such size, with fine lines for speed and shoal draft to cope with river shallows, needed huge hogging trusses to hold them straight, and were frequently rebuilt-and quite often lengthened to provide still finer lines and higher speed. Boilers were placed outboard on the guard rails, to reassure passengers that an explosion would be harmless. After the death of 72 persons in the loss by fire of the Henry Clay in 1852, in an insensate race waged

by her captain, Thomas Collyer, against the Armenia (a boat he&#39;d earlier owned) the chief danger, steamboat racing, was banned and became a thing of the past. Perhaps the fastest, certainly the best loved and most talked-of river steamboat was the Mary Powell, built for the New York-Kingston run in 1861, which she pursued until her retirement in 1917. She opened, and ended, the grand era of steamboating. When she came on the river, over 200 Hudso n River sloops still plied its waters; when she left, only a few, so me converted to schooners for easier handling, remained-chugging along with gas engine auxiliaries. The Powell&#39;s Captain Absalom L. Anderson ran her as &quot;a family boat,&quot; as he regularly declaimed to the press in di sc ussing his record runs. He lengthened her in 1863, from 267&#39; to 288 &#39; , making her fully the match of the famous Daniel Drew and Chauncey Vibbard, which began running the longer course to Albany a few years later. Bu siness men commuted, fami li es travelled, romances flourished aboard these boats, which reached such a height of elegance and service that a novelist comparing the Rhine to the Hudso n concluded: &quot;But the Rhine has no Mary Powell,&quot; knowing he &#39; d be understood. Trompe l&#39;oeil designs replaced the earlier patriotic motifs on the huge paddleboxes; one on the St. John of 1863 , showed a corridor that appeared to go continued on page 8

The 350&#39; Alexander Hamilton of 1924, last sidewheeler on the Hudson, steams past Hook Mountain at the head of the Tappan Zee above Tarry town bound north on rh e Albany run in the 1940s, her flags snapping ro a boisterous westerly and rhe steamer &#39;s own 19-20 MPH speed. Known far and wide as the &quot;White Swan of the Hudson,&quot; she ended her steaming in 1971 and is now in chancery as a wreck in New Jersey, the last of her breed.