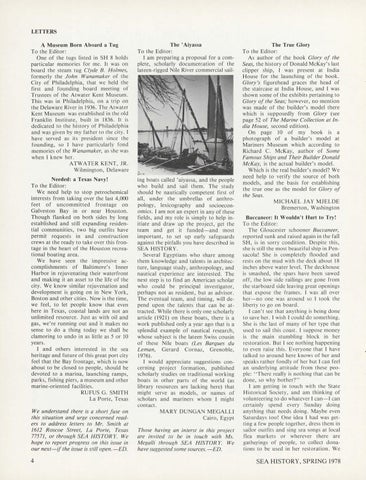 LETTERS A Museum Born Aboard a Tug To the Editor: One of the tugs listed in SH 8 holds particular memories for me. It was on board the steam tug Clyde B. Holmes, formerly the John Wanamaker of the City of Philadelphia, that we held the first and founding board meeting of Trustees of the Atwater Kent Museum. This was in Philadelphia, on a trip on the Delaware River in 1936. The Atwater Kent Museum was established in the old Franklin Institute, built in 1836. It is dedicated to the history of Philadelphia and was given by my father to the city. I have served as its president since the founding, so I have particularly fond memories of the Wanamaker, as she was when I knew her . ATWATER KENT, JR . Wilmington, Delaware

The &#39;Aiyassa To the Editor: I am preparing a proposal for a complete, scholarly documentation of the lateen-rigged Nile River commercial sail-

Needed: a Texas Navy! To the Editor: We need help to stop petrochemical interests from taking over the last 4,000 feet of uncommitted frontage on Galveston Bay in or near Houston. Though flanked on both sides by long established and still expanding residential communities, two big outfits have permit requests in and construction crews at the ready to take over this frontage in the heart of the Houston recreational boating area . We have seen the impressive accomplishments of Baltimore&#39;s Inner Harbor in rejuvenating their waterfront and making it an asset to the life of the city. We know similar rejuvenation and development is going on in New York, Boston and other cities. Now is the time, we feel, to let people know that even here in Texas, coastal lands are not an unlimited resource. Just as with oil and gas, we&#39;re running out and it makes no sense to do a thing today we shall be clamoring to undo in as little as 5 or IO years. I and others interested in the sea heritage and future of this great port city feel that the Bay frontage, which is now about to be closed to people, should be devoted to a marina, launching ramps, parks, fishing piers, a museum and other marine-oriented facilities. RUFUS G. SMITH La Porte, Texas

ing boats called &#39;aiyassa, and the people who build and sail them. The study should be nautically competent first of all, under the umbrellas of anthropology, lexicography and socioeconomics. I am not an expert in any of these fields, and my role is simply to help initiate and draw up the project, get the team and get it funded-and most important, to set up early safeguards against the pitfalls you have described in SEA HISTORY . Several Egyptians who share among them knowledge and talents in architecture, language study, anthropology, and nautical experience are interested. The next step &#39;is to find an American scholar who could be principal investigator, perhaps not as resident, but as advisor. The eventual team, and timing, will depend upon the talents that can be attracted. While there is only one scholarly article (1921) on these boats, there is a work published only a year ago that is a splendid example of nautical research, whose subject is the lateen Swiss cousin of these Nile boats (Les Barques du Leman, Ger.ard Cornaz, Grenoble, 1976). I would appreciate suggestions concerning project formation, published scholarly studies on traditional working boats in other parts of the world (as library resources are lacking here) that might serve as models, or names of scholars and mariners whom I might contact. MARY DUNGAN MEGALLI Cairo, Egypt

We understand there is a short fuse on this situation and urge concerned readers to address letters to Mr. Smith at 1612 Roscoe Street, La Porte, Texas 77571, or through SEA HISTORY. We hope to report progress on this issue in our next-if the issue is still open.-ED. 4

The True Glory To the Editor: As author of the book Glory of the Seas, the history of Donald McKay&#39;s last clipper ship, I was present at India House for the launching of the book. Glory&#39;s figurehead graces the head of the staircase at India House, and I was shown some of the exhibits pertaining to Glory of the Seas; however, no mention was made of the builder&#39;s model there which is supposedly from Glory (see page 52 of The Marine Collection at India House, second edition). On page IO of my book is a photograph of a builder&#39;s model at Mariners Museum which according to Richard C. McKay, author of Some

Famous Ships and Their Builder Donald McKay, is the actual builder&#39;s model.

Those having an inters! in this project are invited to be in touch with Ms. Mega/Ii through SEA HISTORY. We have suggested some sources. -ED.

Which is the real builder&#39;s model? We need help to verify the source of both models, and the basis for establishing the true one as the model for Glory of

the Seas. MICHAEL JAY MJELDE Bremerton, Washington Buccaneer: It Wouldn&#39;I Hurt to Try! To the Editor: The Gloucester schooner Buccaneer, reported sunk and raised again in the fall SH, is in sorry condition. Despite this, she is still the most beautiful ship in Pensacola! She is completely flooded and rests on the mud with the deck about 18 inches above water level. The deckhouse is smashed , the spars have been sawed off, the low side railings are gone from the starboard side leaving great openings that expose the frames . 1 was all over her-no one was around so 1 took the liberty to go on board. 1 can&#39;t see that anything is being done to save her. 1 wish 1 could do something. She is the last of many of her type that used to sail this coast. 1 suppose money is the main stumbling block in her restoration. But 1 see nothing happening to even raise this. Everyone that l have talked to around here knows of her and speaks rather fondly of her but 1 can feel an underlying attitude from these people: &quot;There really is nothing that can be done, so why bother?&quot; 1 am getting in touch with the State Historical Society , and am thinking of volunteering to do whatever 1can-! can certainly spend every Sunday doing anything that needs doing. Maybe even Saturdays too! One idea 1 had was getting a few people together, dress them in sailor outfits and sing sea songs at local flea markets or wherever there are gathe1ings of people, to collect donations to be used in her restoration. We