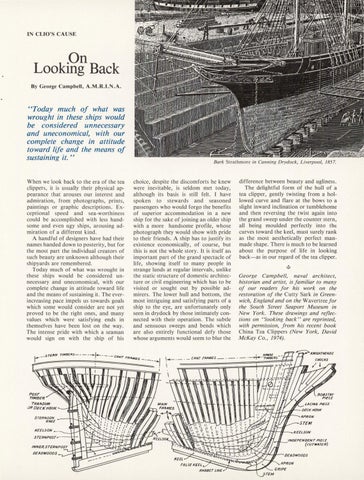 choice, despite the discomforts he knew were inevitable, is seldom met today, although its basis is still felt. I have spoken to stewards and seasoned passengers who would forgo the benefits of superio r accommodation in a new ship for the sake of joining an older ship with a more handsome profile, whose photograph they would show with pride to their friends. A ship has to justify its existence economically, of course, but this is not the whole story. It is itself an important part of the grand spectacle of life, showing itself to many people in strange lands at regular intervals, unlike the static structure of domestic architecture or civil engineering which has to be visited or sought out by possible admirers. The lower hull and bottom, the most intriguing and satisfying parts of a ship to the eye, are unfortunately only seen in drydock by those intimately connected with their operation. The subtle and sensuous sweeps and bends which are also entirely functional defy those whose arguments would seem to blur the

difference between beauty and ugliness. The delightful form of the hull of a tea clipper, gently twisting from a hollowed curve and flare at the bows to a slight inward inclination or tumblehome and then reversing the twist again into the grand sweep under the counter stern, all being moulded perfectly into the curves toward the keel, must surely rank as the most aesthetically perfect manmade shape. There is much to be learned about the purpose of life in looking back-as in our regard of the tea clipper.

George Campbell, naval architect, historian and artist, is familiar to many of our readers for his work on the restoration of the Cutty Sark in Greenwich, England and on the Wavertreefor the South Street Seaport Museum in New York. These drawings and reflections on &quot;looking back&quot; are reprinted, with permission, from his recent book China Tea Clippers (New York, David McKay Co., 1974).