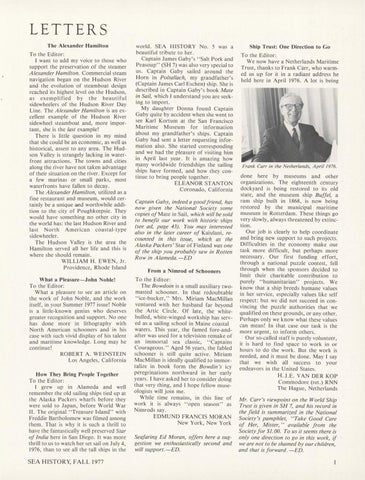 LETTERS The Alexander Hamilton To the Editor: I want to add my voice to those who support the preservation of the steamer Alexander Hamilton. Commercial steam navigation began on the Hudson River and the evolution of steamboat design reached its highest level on the Hudson, as exemplified by the beautiful sidewheelers of the Hudson River Day Line. The Alexander Hamilton is an excellent example of the Hudson River sidewheel steamboat and, more important, she is the last example! There is little question in my mind that she could be an economic, as well as historical, assest to any area. The Hudson Valley is strangely lacking in waterfront attractions. The towns and cities along the river have not taken advantage of their situation on the river. Except for a few marinas or small park s, most waterfronts have fallen to decay. The Alexander Hamilton, utili zed as a fine restaurant and museum, would certainly be a unique a.nd worthwhile addition to the city of Poughkeepsie. They would have something no other city in the world has: the last Hudson River and last North American coastal-type sidewheeler . The Hudson Valley is the area the Hamilton served all her life and this is where she should remain. WILLIAM H. EWEN, Jr. Providence, Rhode Island

What a Pleasure-John Noble! To the Editor: What a pleasure to see an article on th e work of John Noble, and the work itself, in your Summer 1977 issue! Noble is a little-known genius who deserves grea ter recognition and support. No one has done more in lithography with North American schooners and in his case with such vivid display of his talent and maritime knowledge. Long may he continue! ROBERT A. WEINSTEIN Los Angeles, California How They Bring People Together To the Editor: I grew up in Alameda and well remember the old sailing ships tied up at the Alaska Packers wharfs before th ey were sold to Japan, before World War II. The original &quot;Treasure Island&quot; with Freddie Bartholomew was filmed amo ng them. That is why it is such a thrill to have the fantastically well preserved Star of India here in San Diego. It was more thrill to us to watch her set sail on July 4, 1976, than to see all the tall ships in the

world . SEA HISTORY No . 5 was a beautiful tribute to her. Captain James Gaby&#39;s &quot;Salt Pork and Peasoup&quot; (SH 7) was also very special to us. Captain Gaby sailed around the Horn in Poltal/ach, my grandfather&#39;s (Captain James Carl Eschen) ship . She is described in Captain Gaby&#39;s book Mate in Sail, which I understand you are seeking to import. My daughter Donna found Captain Gaby quite by accident when she went to see Karl Kortum at the San Francisco Maritime Museum for information about my grandfather&#39;s ships. Captain Gaby had sent a letter requesting information also. She started corresponding and we had the pleasure of visiting him in April last year. It is amazing how many worldwide friend ships the sailing ships have formed, and how they continue to bring people together. ELEANOR STANTON Coronado, California

Captain Gaby, indeed a good friend, has now given the National Society some copies of Mate in Sail, which will be sold to benefit our work with historic ships (see ad, page 43). You may interested also in the later career of Kaiulani, recounted in this issue, which as the Alaska Packers&#39; Star of Finland was one of the ship you probably saw in Rotten Row in Alameda.-ED From a Nimrod of Schooners To the Editor: The Bowdoin is a small auxiliary twomasted schooner. In that redoubtable &quot;ice-bucker,&quot; Mrs. Miriam MacMillan ventured with her husband far beyond the Artie Circle. Of late, the whitehulled, white-winged workship has served as a sailing school in Maine coastal waters. This year, the famed fore-andafter was used for a television remake of an immortal sea classic, &quot;Captains Courageous.&quot; Aged 56 years, the fabled schooner is still quite active. Miriam MacMillan is ideally qualified to immortalize in book form the Bowdin&#39;s icy peregrinations northward in her early years. I have asked her to consider doing that very thing, and I hope fellow museologists will join me. While time remains, in this line of work it is always &quot;open season&quot; as Nimrods say . EDMUND FRANCIS MORAN New York, New York

Ship Trust: One Direction to Go To the Editor: We now have a Netherlands Maritime Trust, thanks to Frank Carr, who warmed us up for it in a radiant address he held here in April 1976. A lot is being

Frank Carr in the Netherlands, April 1976.

done here by museums and other organizations. The eighteenth century dockyard is being restored to its old state, and the museum ship Buffet, a ram ship built in 1868, is now being restored by the municipal maritime museum in Rotterdam. These things go very slowly, always threatened by extinction. Our job is clearly to help coordinate and bring new support to such projects . Difficulties in the economy make our task more difficult, but perhaps more necessary. Our first funding effort, through a national puzzle contest, fell through when the sponsors decided to limit their charitable contribution to purely &quot;humanitarian&quot; projects. We know that a ship breeds humane values in her service, especially values like self respect: but we did not succeed in convincing the puzzle authorities that we qualified on these grounds, or any other. Perhaps only we know what these values can mean! In that case our task is the more urgent, to inform others. Our so-called staff is purely volunteer, it is hard to find space to work in or hours to do the work. But the work is needed, and it must be done . May I say that we wish all success to your endeavors in the United States. H.J .E. VAN DER KOP Commodore (ret.) RNN The Hague, Netherlands

Mr. Carr&#39;s viewpoint on the World Ship Trust is given in SH 7, and his record in the field is summarized in the National Society&#39;s pamphlet, &quot;Take Good Care of Her, Mister, &quot; available from the Society for $1. 00. To us it seems there is only one direction to go in this work, if we are not to be shamed by our children, and that is forward. -ED.