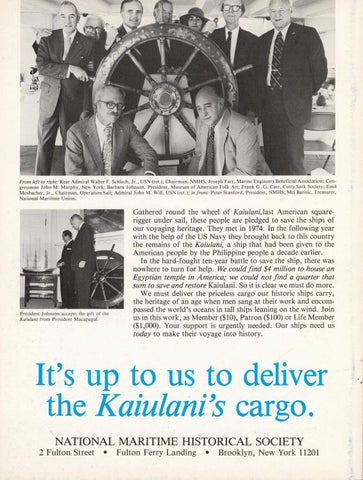 President Johnson accepts the gift of the Kaiulani from President Macapagal.

Gathered round the wheel of Kaiulani, last American squarerigger under sail, these people are pledged to save the ships of our voyaging heritage. They met in 1974. In the following year with the help of the US Navy they brought back to this country the remains of the Kaiulani, a ship that had been given to the American people by the Philippine people a decade earlier. In the hard-fought ten-year battle to save the ship, there was nowhere to turn for help. We could find $4 million to house an Egyptian temple in America; we could not find a quarter that sum to save and restore Kaiulani. So it is clear we must do more. We must deliver the priceless cargo our historic ships carry, the heritage of an age when men sang at their work and encompassed the world&#39;s oceans in tall ships leaning on the wind. Join us in this work, as Member ($10), Patron ($100) or Life Member ($1,000). Your support is urgently needed. Our ships need us today to make their voyage into history.

It&#39;s up to us to deliver the Kaiulani-S cargo. NATIONAL MARITIME HISTORICAL SOCIETY 2 Fulton Street