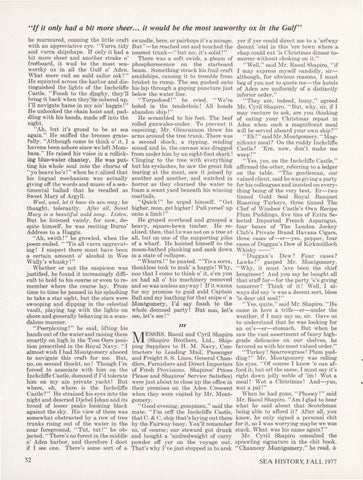 &#39;&#39;If it only had a bit more sheer... it would be the most seaworthy ox in the Gulf&#39;&#39; he murmured, conning the little craft with an appreciative eye. &quot;Vurra tidy and vurra shipshape. If only it had a bit more sheer and another strake o&#39; freeboard, it wud be the most seaworthy ox in all the Gulf o&#39; Aden. What more cud an auld sailor osk?&quot; He squinted across the harbor and distinguished the lights of the Inchcliffe Castle. &quot;Foosh to the dinghy, they&#39;ll bring it back when they&#39;ve sobered up. I&#39;ll novigate hame in my ain&#39; haggis!&quot; He unhooked the chain hoist and, paddling with his hands, made off into the night. &quot;Ah, but it&#39;s grond to be at sea again.&quot; He sniffed the breezes gratefully. &quot;Although come to think o&#39; it, I havena been ashore since we left Mombasa.&quot; He raised his voice in a rollicking blue-water chantey. He was putting his whole soul into the chorus of &quot;yo heave ho&#39;s!&quot; when he r( alized that his lingual mechanism was actually giving off the words and music of a sentimental ballad that he recalled as Sweet Mary of Argyll. W eel, ?peel, let it have its ain way; he thought, tolerantly. After all, Sweet Mary is a beautiful auld song. Listen. But be listened vainly, for now, despite himself, he was reciting Burns&#39; Address to a Haggis. &quot;Ab, swith ! &quot; he growled, when the poem ended. &quot; &#39;Tis all vurra oggravating ! I suspect there must have been a certain amoont o&#39; alcohol in Wee Wully&#39;s wbusky ! &quot; Whether or not the suspicion was justified, he found it increasingly difficult to hold to his course or even to remember where the course lay. From time to time he paused in his splashing to take a star sight, but the stars were swooping and dipping in the celestial vault, playing tag with the lights on shore and generally behaving in a scandalous manner. &quot;Peerplexing ! &quot; he said, lifting his hands out of the water and raising them smartly on high in the Toss Oars position prescribed in the Royal Navy. &quot;I almost wish I had Montgomery aboord to novigate this craft for me. But, no, on second thocht, no! Though I&#39;m forced to associate with him on the Inchcliffe Castle, domned if I&#39;d tolerate him on my ain private yacht! But where, oh, where is the Inchcliffe Castle?&quot; He strained his eyes into the night and descried Djebel Ishan arid its brood of lesser peaks looming black against the sky. His view of them was somewhat obstructed by a row of tree trunks rising out of the water in the near foreground. &quot;Tut, tut!&quot; he objected. &quot;There&#39;s no forest in the middle o&#39; Aden harbor, and therefore I &lt;loot if I see one. There&#39;s some sort of a 52

swundle, here, or pairhops it&#39;s a mirage. But&quot;-hereachedoutand touched the nearest trunk-&quot; but no; it&#39;s solid!&quot; There was a soft swish, a gleam of phosphorescence on the starboard beam. Something struck his frail craft amidships, causing it to tremble from brisket to rump. The sea gushed onto his lap through a gaping puncture just below the water line. &quot;Torpedoed!&quot; he cried. &quot;We&#39;re holed in the tenderloin! All honds abandon ship!&quot; He scrambled to his feet. The beef rolled gunwales-under. To prevent it capsizing, Mr. Glencannon threw his arms around the tree trunk. There was a second shock, a ripping, rending sound and lo, the carcass was dragged from under him by an eight-foot shark! Clinging to the tree with everything but his eyelashes, he saw the great fish tearing at the meat, saw it joined by another and another, and watched in horror as they churned the water to foam a scant yard beneath his wincing coattails. &quot;Quick!&quot; he urged himself. &quot;Get higher, mon, get higher! Pull yersel&#39; up onto a limb!&quot; He groped overhead and grasped a heavy, square-hewn timber. He realized, then, that he was not on a tree at all, but on one of the supporting piles of a wharf. He hoisted himself to the moon-bathed planking and sank down in a state of collapse. &quot;Wburra ! &quot;be panted. &quot;&#39;Tis a sorra, tbonkless tosk to mak&#39; a haggis! Why, noo that I come to think o&#39; it, e&#39;en yon ox bad all o&#39; his machinery removed and so was useless anyway! If it wasna for my promise to guid auld Captain Ball and my loathing for that snipe o&#39; a Montgomery, I&#39;d say foosh to the whole domned party! But noo, let&#39;s see, let&#39;s see!&quot; III

ESSRS. Raoul and Cyril Shapiro (Shapiro Brothers, Ltd., ShipM ping Suppliers to H. M. Navy, Contractors to Leading Mail, Passenger and Freight S. S. Lines, General Chandlers, Furnishers and Direct Importers of Fresh Provisions. Shapiros&#39; Prices Please and Shapiros&#39; Service Satisfies) were just about to close up the office in their premises on the Aden Crescent when they were visited by Mr. Montgomery. &quot;Good evening, gempmen,&quot; said the mate. &quot; I&#39;m orff the Inchcliffe Castle, that C. &amp; C. ship that&#39;s laying out there by the Fairway buoy. You&#39;ll remember us, of course; our steward got drunk and bought a &#39;undredweight of curry powder off yer on the voyage out. That&#39;s why I&#39;ve just stopped in to arsk

yer if yer could direct me to a &#39;arfway decent &#39;otel in this &#39;ere town where a chap could eat &#39;is Christmas dinner tomorrer without choking on it.&quot; &quot;Well,&quot; said Mr. Raoul Shapiro, &quot;if I may express myself candidly, siralthough, for obvious reasons, I must beg of you not to quote me-the hotels of Aden are uniformly of a distinctly inferior order.&quot; &quot;They are, indeed, lousy,&quot; agreed Mr. Cyril Shapiro. &quot;But, why, sir, if I may venture to ask, are you thinking of eating your Christmas repast in Aden when such a magnificent meal will be served aboard your own ship?&quot; &quot;Eh?&quot;saidMr. Montgomery. &quot;Magnificent meal? On the ruddy Inchcliffe Castle? &#39;Ere, now, don&#39;t make me weep!&quot; &quot;Yes, yes, on the Inchcliffe Castle,&quot; affirmed the other, referring to a ledger on the table. &quot;The gentleman, our valued cli ent, said he was giving a party for his colleagues and insisted on everything being of the very best. Er-two tinned Gold Seal Royal Banquet Roasting Turkeys, three tinned The Chef of Windsor Castle&#39;s Own Recipe Plum Puddings, five tins of Extra Selected Imported French Asparagus, four boxes of The London Jockey Club&#39;s Private Brand Havana Cigars, three cases of-er-yes, pepper, four cases of Duggan&#39;s Dew of Kirkintilloch Whisky--&quot; &quot;Duggan&#39;s Dew? Four cases? Law ks!&quot; gasped Mr. Montgomery. &quot;Why, it must &#39;ave been the chief hengineer ! And you say he bought all that stuff for-for the party &#39;e&#39;s giving tomorrer? Think of it! Well, I always did say &#39;e was a decent sort, bless &#39;is dear old soul! &quot; &quot;Yes, quite,&quot; said Mr. Shapiro. &quot;He came in here a trifle-er-under the weather, if I may say so, sir. Gave us to understand that he was looking for an ox&#39;s-er-stomach. But when he saw the vast assortment of fancy highgrade delicacies on our shelves, he favored us with his most valued order.&quot; &#39;&#39;Turkey! Sparrowgrass ! Plum pudding!&quot; Mr. Montgomery was rolling his eyes. &quot;Of course I know &#39;e can afford it; but orl the same, I must say it&#39;s right down jolly noble of &#39;iin ! Wot a meal! Wot a Christmas! And-yus, wot a pal!&quot; When he had gone, &quot;Phooey ! &quot; said Mr. Raoul Shapiro. &quot;Am I glad to hear what he said about that Scotchman being able to afford it? After all, you know, he only signed a personal chit for it, so I was worrying maybe we was stuck. What; was his name again?&quot; Mr. Cyril Shapiro consulted the sprawling signature in the chit book. &quot;Chauncey Montgomery,&quot; he read. &#39;1&gt; SEA HISTORY, FALL 1977