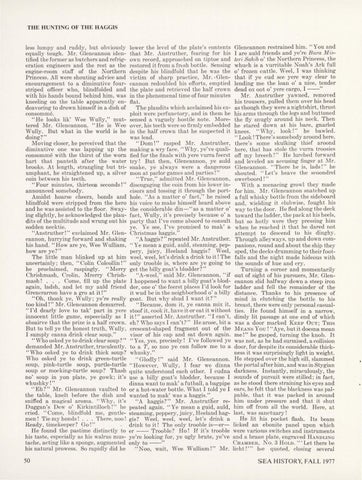 THE HUNTING OF THE HAGGIS

less lumpy and ruddy, but obviously equally tough. Mr. Glencannon identified the former as butchers and refrigeration engineers and the rest as the engine-room staff of the Northern Princess. All were shouting advice and encouragement to a diminutive fourstriped officer who, blindfolded and with his hands bound behind him , was kneeling on the table apparently endeavoring to drown himself in a dish of consomme. &quot;He looks lik&#39; Wee Wully,&quot; muttered Mr. Glencannon. &quot;He is Wee Wully. But what in the world is he doing?&quot; Moving closer, he perceived that the diminutive one was lapping up the consomme with the thirst of the worn hart that panteth after the water brooks. At length, strangling but triumphant, he straightened up, a silver coin between his teeth. &quot;Four minutes, thirteen seconds!&quot; announced somebody. Amidst hoarse cheers, bonds and blindfold were stripped from the hero and h e was assisted to the floor. Swaying slightly, h e acknowledged the plaudi ts of the multitude and wrung out his sodden necktie. &quot;Anstruther!&quot; exclaimed Mr. Glencannon, hurrying forward and shaking his hand. &quot;How are ye, Wee Wulliam, how are ye?&quot; The little man blinked up at him uncertainly; then, &quot;Colin Colcollin ! &quot; he proclaimed, raspingly. &quot;Merry Chrishmash, Crolin, Mrerry Chrishmash! . . . Come, fill up the plate again, ladsh, and let my auld friend Grencrarron have a gro at it!&quot; &quot;Oh, thonk ye, Wully; ye&#39;re really too kind!&quot; Mr. Glencannon demurred. &quot;I&#39;d dearly love to tak&#39; part in yere innocent little game, espeecially as I obsairve that the prize is a half crown. But to tell ye the honest truth, Wully, I sumply canna drink clear soup.&quot; &quot;Who osked ye to drink clear soup?&quot; demanded Mr. Anstruther, truculently. &quot;&quot;Who osked ye to drink thick soup? Who osked ye to drink green-turtle soup, pink-turtle soup, purtle-turtle soup or moeking-turt.le soup? Thash no&#39; soup in yon plate, ye gowk; it&#39;s whushky ! &quot; &quot;Eh?&quot; Mr. Glencannon vaulted to the table, knelt before the dish and sniffed a magical aroma. &quot;Why, it&#39;s Duggan&#39;s Dew o&#39; Kirkintilloch!&quot; he cried. &quot;Come, blindfold me, gentlemen ! Tie my honds ! . . . There, noo ! Ready, timekeeper? Go!&quot; He found the pastime distinctly to his taste, especially as his walrus mustache, acting like a sponge, augmented his natural prowess. So rapidly did he

lower the level of the plate&#39;s contents that Mr. Anstruther, fearing for his own record, approached on tiptoe and restored it from a frt::sh bottle. Sensing despite his blindfold that he was the victim of sharp practice, Mr. ÂˇGlencannon redoubled his efforts, emptied the plate and retrieved the half crown in the phenomenal time of four minutes flat. The plaudits which acclaimed his exploit were perfunctory, and in them he sensed a vaguely hostile note. Moreover, his teeth were so firmly embedded in the half crown that he suspected it was lead. &quot;Dom!&quot; rasped Mr. Anstruther, making a wry face. &quot;Why, ye&#39;ve qualified for the finals with yere vurra feerst try! But then , Glencannon, ye auld snake, ye always were a dangerous mon at parlor games and parties!&quot; &quot;True,&quot; admitted Mr. Glencannon, disengaging the coin from his lower incisors and tossing it through the porthole. &quot;As a matter o&#39; fact,&quot; he raised his voice to make himself heard above the considerable din-&quot;as a matter o&#39; fact, Wully, it&#39;s precisely because o&#39; a party that I&#39;ve come aboord to consult ye. Ye see, I&#39;ve promised to mak&#39; a Christmas haggis.&quot; &quot;A haggis?&quot; repeated Mr. Anstrutber. &quot;Ye mean a guid, auld, steaming, peppery, juicy, Heeland haggis? Weel, weel, weel, let&#39;s drink a drink&#39;to it! The only trooble is, where are ye going to get the billy goat&#39;s bl odder?&quot; &quot;A-weel,&quot; said Mr. Glencannon, &quot;if I hoppened to want a billy goat&#39;s blodder, one o&#39; the feerst places I&#39;d look for it wud be in the neighborhood o&#39; a billy goat. But why shud I want it?&quot; &quot;Because, dom it, ye canna mix it, stoof it, cook it, have it or eat it withoot it!&quot; asserted Mr. Anstruther. &quot;I can&#39;t, eh? Who says I can&#39;t?&quot; He arose, bit a crescent-shaped fragment out of the visor of his cap and sat down again. &quot;Yes, yes, precisely! I&#39;ve followed ye to a T, so noo ye can follow me to a whusky.&quot; &quot;Glodly !&quot; said Mr. Glencannon. &quot;However, vVully, I fear we dinna quite understond each other. I cudna use a billy goat&#39;s blodder, because I dinna want to mak&#39; a fut ball, a bagpipe or a hot-water bottle. What I told ye I wanted to mak&#39; was a haggis.&quot; &quot;A haggis?&quot; Mr. Anstrutlier repeated again. &quot;Ye mean a guid, auld, steaming, peppery, juicy, Heeland haggis? W eel, weel, weel, let&#39;s drink a drink to it! The only trooble is-erer - - Trooble ? Ho! If it&#39;s trooble ye&#39;re looking for, ye ugly brute, ye&#39;ve only to--&quot; &quot;Noo, wait, Wee Wulliam!&quot; Mr.

Glencannon restrained him. &quot;You and I are auld friends and ye&#39;re Eura Misteri Sahib o&#39; the Northern Princess, the wbuch is a vurritable Noah&#39;s Ark full o&#39; frozen cattle. Wee!, I was thinking that if ye cud see yere way clear to lending me the loan o&#39; a nice, tender dead ox oot o&#39; yere cargo, I - - &quot; Mr. Anstruther yawned, removed his trousers, pulled them over his head as though they were a night.shirt, thrust his arms through the legs and buttoned the fly snugly around his neck. Then he stared down at his bare, gnarled knees . . . ,,.hy, look!&quot; be bawled. &quot;Look! There&#39;s somebody aroond here, there&#39;s some skulking thief aroond here, that has stole the vurra troosies off my breech!&quot; He lurched forward and leveled an accusing finger at Mr. Glencannon. &quot;There he is, lads!&quot; he shouted. &quot;Let&#39;s heave the scoondrel owerboord ! &quot; With a menacing growl they made for him. Mr. Glencannon snatched up a full whisky bottle from the sideboard and, wielding it clubwise, fought his way to the door. He fled along the deck toward the ladder, the pack at his heels, but so hotly were they pressing him when he reached it that he dared not attempt to descend to his dinghy. Through alleyways. up and down companions, round and about the ship they sped, the decks drumming to their footfalls and the night made hideous with the sounds of hue and cry. Turning a corner and momentarily out of sight of his pursuers, Mr. Glencannon slid halfway down a steep iron ladder and fell the remainder of the distance. Thanks to his presence of mind in clutching the bottle to his breast, there were only personal casualties. He found himself in a narrow, dimly lit passage at one end of which was a door marked KEEP OuT; THIS MEANS You! &quot;Aye, but it doesna mean me!&quot; he gasped, turning the knob. It was not, as he had surmised, a collision door, for despite its considerable thickness it was surprisingly light in weight. He stepped over the high sill, slammed the portal after him, and was in Stygian darkness. Instantly, miraculously, the sounds of pursuit were stilled; in fact, as he stood there straining his eyel! and ears, he felt that the blackness was palpable, that it, was packed in around him under pressure and that it shut him off from all the world. Here, at last, was sanctuary! He lit his pocket flash. Its beam licked an ebonite panel upon which were varioms switches and instruments and a brasss plate, engraved HANDLING CHAMBER. No. 3 HOLD. &quot;&#39;Let there be licht ! &#39;&quot; hte quoted, closing several