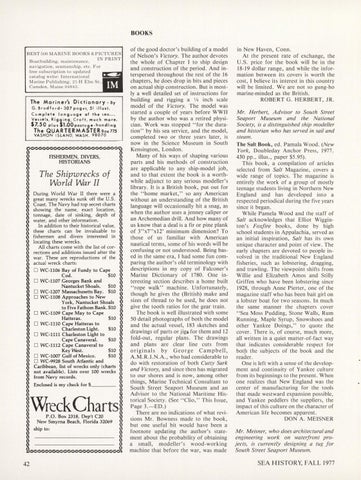 S During World War II there were a S g great many wrecks sunk off the U.S. S S Coast. The Navy had top secret charts 8

the name, exact location, date of sinking, depth of water, and other information. In addition to their historical value, these charts can be invaluable to fishermen and divers interested in locating these wrecks. All charts come with the list of corrections and additions issued after the war. These are reproductions of the actual wreck charts: D WC-1106 Bay of Fundy to Cape Cod. $10 D WC-1107 Georges Bank and Nantucket Shoals. $10 D WC-1207 Massachusetts Bay. $10 0 WC-1108 Approaches to New York, Nantucket Shoals to Five Fathom Bank. $10 0 WC-1109 Cape May to Cape Hatteras. $10 0 WC-1110 Cape Hatteras to Charleston Light. $10 0 WC-1111 Charleston Light to Cape Canaveral. $10 0 WC-1112 Cape Canaveral to Key West. $10 D WC-1007 Gulf of Mexico. $10 D WC-9928 South Atlantic and Caribbean, list of wrecks only (charts not available). Lists over 100 wrecks from Navy records.

Enclosed is my check for $

of the good doctor&#39;s building of a model of Nelson&#39;s Victory. The author devotes the whole of Chapter I to ship design and construction of the period . And interspersed throughout the rest of the 16 chapters, he does drop in bits and pieces on actual ship construction . But is mostly a well detailed set of instructions for building and rigging a V. inch scale model of the Victory. The model was started a couple of years before WWII by the author who was a retired physician. Work was stopped &quot;for the duration&quot; by his sea service, and the model, completed two or three years later, is now in the Science Museum in South Kensington, London . Many of his ways of shaping various parts and his methods of construction are applicable to any ship-model job, and to that extent the book is a worthwhile adjunct to any serious modeller&#39;s library. It is a British book, put out for the &quot;home. market,&quot; so any American without an understanding of the British language will occasionally hit a snag, as when the author uses a jenney caliper or an Archemedian drill. And how many of us know that a deal is a fir or pine plank of 3&quot;x7&quot;xl2&#39; minimum dimension? To those of us familiar with American nautical terms, some of his words will be confusing or not understood . Being based in the same era, I had some fun comparing the author&#39;s old terminology with descriptions in my copy of Falconer&#39;s Marine Dictionary of 1780. One interesting section describes a home built &quot;rope walk&quot; machine. Unfortunately, though he gives the (British) make and sizes of thread to be used, he does not give the tooth ratios for the gear train. The book is well illustrated with some 50 detail photographs of both the model and the actual vessel, 183 sketches and drawings of parts or jig~ for them and 12 fold-out, regular plans. The drawings and plans are clear line cuts from originals by George Campbefl, A.M.R.l.N.A., who had considerable to do with restoration of both Cutty Sark and Victory, and since then has migrated to our shores and is now, among other things, Marine Technical Consultant to South Street Seaport Museum and an Advisor to the National Maritime Historical Society. (See &quot;Clio,&quot; This Issue, Page 3.-ED.) There are no indications of what revisions Mr. Bowness made to the book, but one useful bit would have been a footnote updating the author&#39;s statement about the probability of obtaining a small, modeller&#39;s wood-working machine that before the war, was made

in New Haven, Conn. At the present rate of exchange, the U.S. price for the book will be in the 18-19 dollar range, and while the information between its covers is worth the cost, I believe its interest in this country will be limited. We are not so gung-ho marine-minded as the British . ROBERT G. HERBERT, JR.

Mr. Herbert, Advisor to South Street Seaport Museum and the National Society, is a distinguished ship modeller and historian who has served in sail and steam. The Salt Book, ed. Pamala Wood. (New York, Doubleday Anchor Press, 1977. 430 pp., illus., paper $5.95). This book, a compilation of articles selected from Salt Magazine, covers a wide range of topics . The magazine is entirely the work of a group of mostly teenage students living in Northern New England and has developed into a respected periodiCal during the five years since it began. While Pamela Wood and the staff of Salt acknowledges that Elliot Wigginton &#39;s Foxfire books, done by high school students in Appalachia, served as an initial inspiration, Salt has its own unique character and point of view. The early chapters are devoted to people involved in the traditional New England fisheries, such as lobstering, dragging, and trawling. The viewpoint shifts from Willie and Elizabeth Amos and Stilly Griffen who have been lobstering since 1928, through Anne Pierter, one of the magazine staff who has been bait girl on a lobster boat for two seasons. In much the same manner the chapters cover &quot;Sea Moss Pudding, Stone Walls, Rum Running, Maple Syrup, Snowshoes and other Yankee Doings,&quot; to quote the cover. There is, of course, much more, all written in a quiet matter-of-fact way that indicates considerable respect for botp the subjects of the book and the reader. One is left with a sense of the development and continuity of Yankee culture from its beginnings to the present. When one realizes that New England was the center of manufacturing for the tools that made westward expansion possible, and Yankee peddlers the suppliers, the impact of this culture on the character of American life becomes apparent. DON A . MEISNER Mr. Meisner, who does architectural and engineering work on waterfront projects, is currently designing a tug for South Street Seaport Museum.