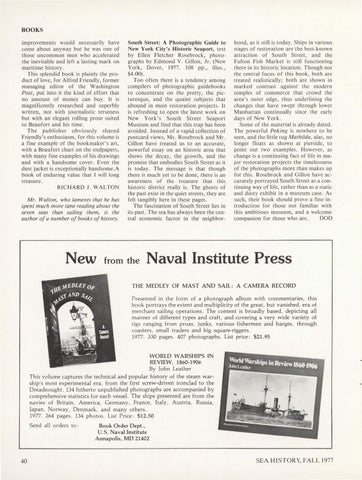 BOOKS improvements would necessarily have come about anyway but he was one of those uncommon men who accelerated the inevitable and left a lasting mark on maritime history. This splendid book is plainly the product of love, for Alfred Friendly, former managing editor of the Washington Post, put into it the kind of effort that no amount of money can buy. It is magnificently researched and superbly written, not with journalistic terseness but with an elegant rolling prose suited to Beaufort and his time. The publisher obviously shared Friendly&#39;s enthusiasm, for this volume is a fine example of the bookmaker&#39;s art, with a Beaufort chart on the endpapers, with many fine examples of his drawings and with a handsome cover. Even the dust jacket is exceptionally handsome.A book of enduring value that I will long treasure. RICHARD J. WAL TON

Mr. Walton, who laments that he has spent much more time reading about the seven seas than sailing them, is the author of a number of books of history.

South Street: A Photographic Guide to New York City&#39;s Historic Seaport, text by Ellen Fletcher Rosebrock, photographs by Edmond V. Gillon, Jr. (New York, Dover, 1977. 108 pp., illus., $4 .00). Too often there is a tendency among compilers of photographic guidebooks to concentrate on the pretty, the picturesque, and the quaint subjects that abound in most restoration projects. It is refreshing to open the latest work on New York&#39;s South Street Seaport Museum and find that this trap has been avoided. Instead of a vapid collection of postcard views, Ms. Rosebrock and Mr. Gillon have treated us to an accurate, powerful essay on an historic area that shows the decay, the growth, and the promise that embodies South Street as it is today. The message is that though there is much yet to be done, there is an awareness of the treasure that this historic district really is. The ghosts of the past exist in the quiet streets, they are felt tangibly here in these pages. The fascination of South Street lies in its past. The sea has always been the central economic factor in the neighbor-

hood, as it still is today. Ships in various stages of restoration are the best-known attraction of South Street, and the Fulton Fish Market is still functioning there in its historic location. Though not the central focus of this book, both are treated realistically; both are shown in marked contrast against the modern temples of commerce that crowd the area&#39;s outer edge, thus underlining the changes that have swept through lower Manhattan continually since the early days of New York. Some of the material is already dated. The powerful Peking is nowhere to be seen, and the little tug Mathilda, alas, no longer floats as shown at pierside, to point out two examples. However, as change is a continuing fact of life in major restoration projects the timelessness of the photographs more than makes up for this. Rosebrock and Gillon have accurately portrayed South Street as a continuing way of life, rather than as a static and dusty exhibit in a museum case. As such, their book should prove a fine introduction for those not familiar with this ambitious museum, and a welcome companion for those who are. DOD

THE MEDLEY OF MAST AND SAIL: A CAMERA RECORD Presented in the form of a photograph album with commentaries, this book portrays the extent and multiplicity of the great, but vanished, era of merchant sailing operations. The content is broadly based, depicting all manner of different types and craft, and covering a very wide variety of rigs ranging from proas, junks, various fishermen Âˇ and barges, through coasters, small traders and big square-riggers. 1977. 330 pages . 407 photographs. List price: $21.95

WORLD WARSHIPS IN REVIEW, 1860-1906 By John Leather This volume captures the technical and popular history of the steam warship&#39;s most experimental era, from the first screw-driven ironclad to the Dreadnought. 134 hitherto unpublished photographs are accompanied by comprehensive statistics for each vessel. The ships presented are from the navies of Britain, America, Germany, France, Italy, Austria, Russia, Japan, Norway, Denmark, and many others. 1977. 264 pages. 134 photos . List Price: $12.50 Send all orders to: