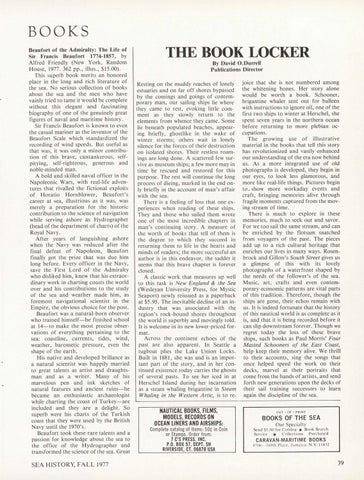 BOOKS Beaufort of the Admiralty: The Life of Sir Francis Beaufort 1774-1857, by Alfred Friendly (New York, Random House, 1977. 362 pp., illus., $15.00). This superb book merits an honored place in the long and rich literature of the sea. No serious collection of books about the sea and the men who have vainly tried to tame it would be complete without this elegant and fascinating biography of one of the genuinely great figures of naval and maritime history. Sir Francis Beaufort is known to even the casual mariner as the inventor of the Beaufort Scale which standardized the recording of wind speeds. But useful as that was, it was only a minor contribution of this brave, cantankerous, selfpitying, self-righteous, generous and noble-minded man. A bold and skilled naval officer in the Napoleonic Wars, with real-life adventures that rivalled the fictional exploits of Horatio Hornblower, Beaufort&#39;s career at sea, illustrious as it was, was merely a preparation for the historic contribution to the science of navigation while serving ashore as Hydrographer (head of the department of charts) of the Royal Navy . After years of languishing ashore when the Navy was reduced after the final defeat of Napoleon, Beaufort finally got the prize tl:iat was due him long before. Every officer in the Navy, save the First Lord of the Admiralty who disliked him, knew that his extraordinary work in charting coasts the world over and his contributions to the study of the sea and weather made him, as foremost navigational scientist in the Empire, the obvious choice for the post. Beaufort was a natural-born observer who trained himself-he finished school at 14-to make the most precise observations of everything pertaining to the sea: coastline, currents, tides, wind, weather, barometic pressure, even the shape of the earth. His native and developed brillance as a natural scientist was happily married to great talents as artist and draughtsman and as a writer. Many of his marvelous pen and ink sketches of natural features and ancient ruins-he became an enthusiastic archaeologist while charting the coast of Turkey-are included and they are a delight. So superb were his charts of the Turkish coast that they were used by the British Navy until the I 970&#39;s. Beaufort took these rare talents and a passion for knowledge about the sea to the office of the Hydrographer and transformed the science of the sea. Great

Resting on the muddy reaches of lonely estuaries and on far off shores bypassed by the comings and goings of contemporary man, our sailing ships lie where they came to rest, evoking little comment as they slowly return to the elements from whence they came. Some lie beneath populated beaches, appearing briefly, ghostlike in the wake of winter storms; others wait in lonely silence for the forces of their destruction on isolated shores. Their restless roamings are long done. A scattered few survive as museum ships; a few more may in time be rescued and restored for this purpose. The rest will continue the long process of dieing, marked in the end only briefly in the account of man&#39;s affa ir with the sea. There is a feeling of loss that one experiences when reading of these ships. They and those who sailed them wrote one of the most incredible chapters in man &#39;s continuing story. A measure of the worth of books that tell of them is the degree to which they succeed in returning them to life in the hearts and minds of readers; the more successful an author is in this endeavor, the sadder it seems that this brave chapter is forever closed. A classic work that measures up well to this task is New England &amp; the Sea (Wesleyan University Press , for Mystic Seaport) newly reissued as a paperback at $5.95. The inevitable decline of an industry that was associated with the region&#39;s rock-bound shores throughout the world is superbly and movingly told . It is welcome in its new lower-priced format. Across the continent echoes of the past are also apparent. In Seattle a tugboat plies the Lake Union Locks. Built in 1881, she was and is an important part of the story, and in her continued existence today carries the ghosts of several pasts. To see her iced in at Herschel Island during her incarnation as a steam whaling brigantine in Steam Whaling in the Western Artie, is to re-

joice that she is not numbered among the whitening bones. Her story alone would be worth a book . Schooner, brigantine whaler sent out for balleen with instructions to ignore oil, one of the first two ships to winter at Herschel, she spent seven years in the northern ocean before returning to more plebian occupations. The growing use of illustrative material in the books that tell this story has revolutionized and vastly enhanced our understanding of the era now behind us . As a more integrated use of old photographs is developed, they begin in our eyes, to look less glamorous, and more like real-life things. Pictures begin to. show more workaday events and craft, bringing memories alive through fragile moments captured from the moving stream of time. There is much to explore in these memories, much to seek out and savor. For we too sail the same stream, and can be enriched by the flotsam snatched from voyagers of the past. The pieces add up to a rich cultural heritage that enriches our lives in many ways . Rosenbrock and Gillan&#39;s South Street gives us a glimpse of this with its lovely photographs of a waterfront shaped by the needs of the follower&#39;s of the sea. Music, art, crafts and even contemporary economic patterns are vital parts of this tradition. Therefore, though the ships are gone, their echos remain with us . It is indeed fortunate that the history of this nautical world is as complete as it is, and that it is being recorded before it can slip downstream forever. Though we regret today the loss of these brave ships, such books as Paul Morris&#39; Four

Masted Schooners of the East Coast, help keep their memory alive. We thrill to their accounts, sing the songs that once helped speed the work on their decks, marvel at their portraits that come from the hands of artists, and send forth new generations upon the decks of their sail training successors to learn again the discipline of the sea. OU T - OF - PRINT