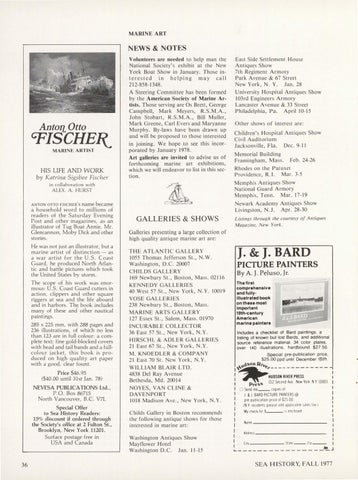 HIS LIFE AND WORK by Katrina Sigsbee Fischer

Volunteers are needed to help man the National Society&#39;s exhibit at the New York Boat Show in January. Those int eres t e d in helping ma y ca ll 212-858-1348. A Steering Committee has been formed by th e American Society of Marine Artists. Those serving are Os Brett, George Campbell, Mark Meyers, R.S.M.A., John Stobart, R. S. M.A., Bill Muller, Mark Greene, Carl Evers and Maryanne Murphy. By-laws have been drawn up and will be proposed to those interested in joining. We hope to see this incorporated by January 1978 . Art galleries are invited to advise us of forthcoming marine art exhibitions, whic h we will endeavor to list in this section .

He was not just an illustrator, but a marine artist of distinction - as a war artist for the U.S. Coast Guard, he produced North Atlantic and battle pictures which took the United Sta tes by storm . The scope of his work was enormous: U.S. Coast Guard cutters in action, clip pers and other square riggers at sea and the life aboard and in harbors. The book includes many of these a nd other nautical paintings. 285 x 225 mm, with 288 pages and 236 illustrations, of which no less than 123 are in full colour: a complete text; fine gold-blocked covers with head and tail bands and a fullco lour jacket, this book is produced on high qual ity art paper with a good, clear fount. Price $46.95 ($40.00 until 31st Jan . 78)

in co ll aboration with

ANTON OTTO FISCHER&#39;S name became a household word to millions of readers of the Saturday Evening Post and other magazines, as an illustrator of Tug Boat Annie, Mr . Glencannon, Moby Dick and o ther stories.

J. &amp; J. BARD PICTURE PAINTERS By A.] . Peluso, Jr. The first comprehensive andfullylllustrated book on these most Important 19th~entury