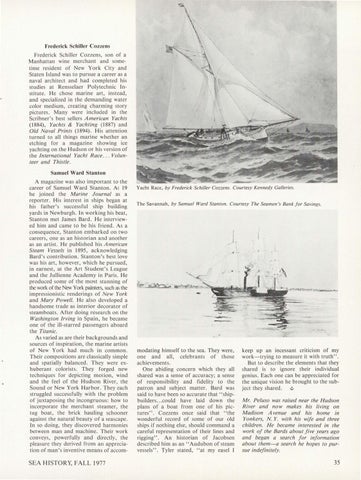 Frederick Schiller Cozzens, son of a Manhattan wine merchant and sometime resident of New York City and Staten Island was to pursue a career as a naval architect and had completed his studies at Rensselaer Polytechnic Institute. He chose marine art, instead, and specialized Âˇ in the demanding water color medium, creating charming story pictures. Many were included in the Scribner&#39;s best sellers American Yachts (1884), Yachts &amp; Yachting (1887) and Old Naval Prints (1894). His attention turned to all things marine whether an etching for a magazine showing ice yachting on the Hudson or his version of the International Yacht Race . . . Volun-

A magazine was also important to the career of Samuel Ward Stanton. At 19 he joined the Marine Journal as a reporter. His interest in ships began at his father&#39;s successful ship building yards in Newburgh. In working his beat, Stanton met James Bard. He interviewed him and came to be his friend. As a consequence, Stanton embarked on two careers, one as an historian and another as an artist. He published his American Steam Vessels in 1895, acknowledging Bard&#39;s contribution. Stanton&#39;s best love was his art, however, which he pursued, in earnest, at the Art Student&#39;s League and the Jullienne Academy in Paris . He produced some of the most stunning of the work of the New York painters, such as the impressionistic renderings of New York and Mary Powell. He also developed a handsome trade as interior decorator of steamboats. After doing research on the Washington Irving in Spain, he became one of the ill-starred passengers aboard the Titanic. As varied as are their backgrounds and sources of inspiration, the marine artists of New York had much in common. Their compositions are classically simple and spatially balanced. They were exhuberant colorists. They forged new techniques for depicting motion, wind and the feel of the Hudson River, the Sound or New York Harbor. They each struggled successfully with the problem of juxtaposing the incongruous: how to incorporate the merchant steamer, the tug boat, the brick hauling schooner against the natural beauty of a seascape. In so doing, they discovered harmonies between man and machine. Their work conveys, powerfully and directly, the pleasure they derived from an appreciation of man&#39;s inventive means of accom-

modating himself to the sea. They were, one and all, celebrants of those achievements. One abiding concern which they all shared was a sense of accuracy; a sense of responsibility and fidelity to the patron and subject matter. Bard was said to have been so accurate that &quot;shipbuilders ... could have laid down the plans of a boat from one of his pictures&quot;. Cozzens once said that &quot;the wonderful record of some of our old ships if nothing else, should command a careful representation of their lines and rigging&quot;. An historian of Jacobsen described him as an &quot;Audubon of steam vessels&quot;. Tyler stated, &quot;at my easel I

keep up an incessant cnt1c1sm of my work-trying to measure it with truth&quot;. But to describe the elements that they shared is to ignore their individual genius. Each one can be appreciated for the unique vision he brought to the subject they shared. .ii

Mr. Peluso was raised near the Hudson River and now makes his living on Madison A venue and his home in Yonkers, N. Y. with his wife and three children. He became interested in the work of the Bards about five years ago and began a search for information about them-a search he hopes to pursue indefinitely.