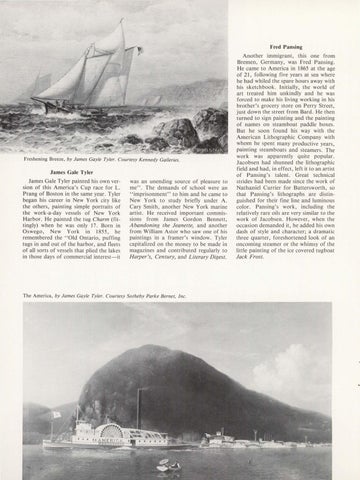 James Gale Tyler James Gale Tyler painted his own version of this America&#39;s Cup race for L. Prang of Boston in the same year. Tyler began his career in New York city like the others, painting simple portraits of the work-a-day vessels of New York Harbor. He painted the tug Charm (fittingly) when he was only 17. Born in Oswego, New York in 1855, he remembered the &quot;Old Ontario, puffing tugs in and out of the harbor, and fleets of all sorts of vessels that plied the lakes in those days of commercial interest-it

was an unending source of pleasure to me&quot;. The demands of school were an &quot;imprisonment&quot; to him and he came to New York to study briefly under A. Cary Smith, another New York marine artist. He received important commissions from James Gordon Bennett, Abandoning the Jeanette, and another from William Astor who saw one of his paintings in a framer&#39;s window. Tyler capitalized on the money to be made in magazines and contributed regularly to Harper&#39;s, Century, and Literary Digest.

Another immigrant, this one from Bremen, Germany, was Fred Pansing. He came to America in 1865 at the age of 21, following five years at sea where he had whiled the spare hours away with his sketchbook. Initially, the world of art treated him unkindly and he was forced to make his living working in his brother&#39;s grocery store on Perry Street, just down the street from Bard. He then turned to sign painting and the painting of names on steamboat paddle boxes. But he soon found his way with the American Lithographic Company with whom he spent many productive years, painting steamboats and steamers. The work was apparently quite popular. Jacobsen had shunned the lithographic field and had, in effect, left it to an artist of Pansing&#39;s talent. Great technical strides had been made since the work of Nathaniel Currier for Buttersworth, so that Pansing&#39;s lithographs are distinguished for their fine line and luminous color. Pansing&#39;s work, including the relatively rare oils are very similar to the work of Jacobsen . However, when the occasion demanded it, he added his own dash of style and character; a dramatic three quarter, foreshortened look of an oncoming steamer or the whimsy of the little painting of the ice covered tugboat