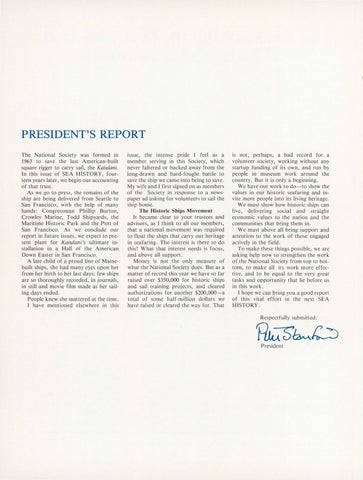 PRESIDENT&#39;S REPORT The National Society was formed in 1963 to save the last American-built square rigger to carry sail, the Kaiulani. In this issue of SEA HI STORY, fourteen years later, we begin our accounting of that trust. As we go to press, the remains of the ship are being delivered from Seattle to San Francisco, with the help of many hands: Congressman Phillip Burton, Crowley Marine, Todd Shipyards, the Maritime Historic Park and the Port of San Francisco. As we conclude our report in future issues, we expect to present plant for Kaiulani&#39;s ultimate installation in a Hall of the American Down Easter in San Francisco . A late child of a proud line of Mainebuilt ships, she had many eyes upon her from her birth to her last days: few ships are so thoroughly recorded, in journals, in still and movie film made as her sailing days ended. People knew she mattered at the time. I have mentioned elsewhere in this

issue, the intense pride I feel as a member serving in this Society, which never faltered or backed away from the long-drawn and hard-fought battle to save the ship we came into being to save. My wife and I first signed on as members of the Society in response to a newspaper ad asking for volunteers to sail the ship home. The Historic Ships Movement It became clear to your trustees and advisors, as I think to all our members, that a national movement was required to float the ships that carry our heritage in seafaring. The interest is there to do this! What that interest needs is focus, and above all support. Money is not the only measure of what the National Society does. But as a matter of record this year we have so far raised over $350,000 for historic ships and sail training projects, and cleared authorizations for another $200,000-a total of some half-million dollars we have raised or cleared the way for. That

is not, perhaps, a bad record for a volunteer society, working without any startup funding of its own, and run by people in museum work around the country. But it is only a beginning. We have our work to do-to show the values in our historic seafaring and invite more people into its living heritage. We must show how historic ships can live, delivering social and straight economic values to the nation and the communities that bring them in. We must above all bring support and attention to the work of those engaged actively in the field. To make these things possible, we are asking help now to strengthen the work of the National Society from top to bottom, to make all its work more effective, and to be equal to the very great tasks and opportunity that lie before us in this work. I hope we can bring you a good report of this vital effort in the next SEA HISTORY. Respectfully submitted: