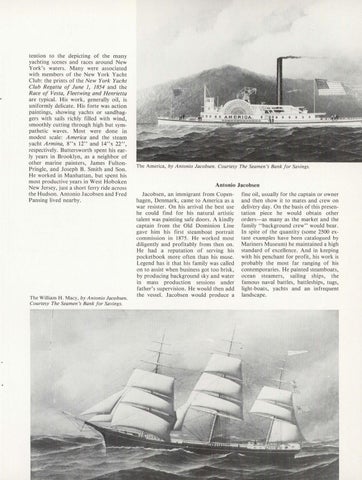 Race of Vesta, Fleetwing and Henrietta are typical. His work, generally oil, is uniformly delicate. His forte was action paintings, showing yachts or sandbaggers with sails richly filled with wind, smoothly cutting through high but sympathetic waves. Most were done in modest scale: America and the steam yacht Armina, 8&quot;x 12&quot; and 14&quot;x 22&quot;, respectively. Buttersworth spent his early years in Brooklyn, as a neighbor of other marine painters, James FultonPringle, and Joseph 8. Smith and Son. He worked in Manhattan, but spent his most productive years in West Hoboken New Jersey, just a short ferry ride across the Hudson. Antonio Jacobsen and Fred Pansing lived nearby.

Courtesy The Seamen&#39;s Bank for Savings.

The America, by Antonio Jacobsen. Courtesy The Seamen&#39;s Bank for Savings.

Jacobsen, an immigrant from Copenhagen, Denmark, came to America as a war resister. On his arrival the best use he could find for his natural artistic talent was painting safe doors. A kindly captain from the Old Dominion Line gave him his first steamboat portrait commission in 1875. He worked most diligently and profitably from then on. He had a reputation of serving his pocketbook more often than his muse. Legend has it that his family was called on to assist when business got too brisk, by producing background sky and water in mass production sessions under father&#39;s supervision. He would then add the vessel. Jacobsen would produce a

fine oil, usually for the captain or owner and then show it to mates and crew on delivery day. On the basis of this presentation piece he would obtain other orders-as many as the market and the family &quot;background crew&quot; would bear. In spite of the quantity (some 2500 extant examples have been catalogued by Mariners Museum) he maintained a high standard of excellence. And in keeping with his penchant for profit, his work is probably the most far ranging of his contemporaries. He painted steamboats, ocean steamers, sailing ships, the famous naval battles, battleships, tugs, light-boats, yachts and an infrequent landscape.