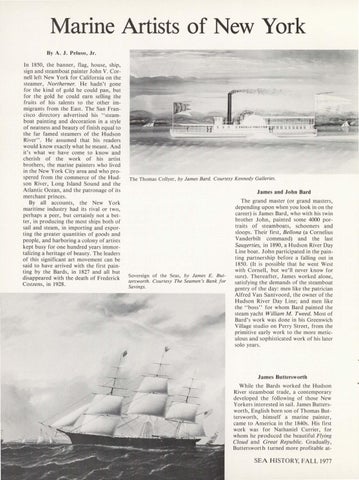 Marine Artists of New York By A. J. Peluso, Jr. In 1850, the banner, flag, house, ship, sign and steamboat painter John V. Cornell left New York for California on the steamer, Northerner. He hadn&#39;t gone for the kind of gold he could pan, but for the gold he could earn selling the fruits of his talents to the other immigrants from the East. The San Francisco directory advertised his &quot;steamboat painting and decoration in a style of neatness and beauty of finish equal to the far famed steamers of the Hudson River&quot;. He assumed that his readers would know exactly what he meant. And it&#39; s what we have come to know and cherish of the work of his artist brothers, the marine painters who lived in the New York City area and who prospered from the commerce of the Hudson River, Long Island Sound and the Atlantic Ocean, and the patronage of its merchant princes. By all accounts, the New York maritime industry had its rival or two, perhaps a peer, but certainly not a better, in producing the most ships both of sai l and steam, in importing and exporting the greater quantities of goods and people, and harboring a colony of art ists kept busy for one hundred years immortalizing a heritage of beauty. The leaders of this significant art movement can be said to have arrived with the first painting by the Bards, in 1827 and all but disappeared with the death of Frederick Cozzens, in 1928.

Sovereign of the Seas, by James ÂŁ. Buttersworth. Courtesy The Seamen&#39;s Bank for Savings.

The grand master (or grand masters, depending upon when you look in on the career) is James Bard, who with his twin brother John, painted some 4000 portraits of steamboats, schooners and sloops. Their first, Be/Iona (a Cornelius Vanderbilt command) and the last Saugerties, in 1890, a Hudson River Day Line boat. John participated in the painting partnership before a falling out in 1850. (It is possible that he went West with Cornell, but we&#39;ll never know for sure). Thereafter, James worked alone, satisfying the demands of the steamboat gentry of the day : men like the patrician Alfred Van Santvoord, the owner of the Hudson River Day Line; and men like the &quot;boss&quot; for whom Bard painted the steam yacht William M. Tweed. Most of Bard&#39;s work was done in his Greenwich Village studio on Perry Street, from the primitive early work to the more meticulous and sophisticated work of his later solo years.

- ÂˇJames Buttersworth While the Bards worked the Hudson River steamboat trade, a contemporary developed the following of those New Yorkers interested in sail. Jam es Buttersworth, English born son of Thomas Buttersworth, himself a marine painter, came to America in the 1840s. His first work was for Nathaniel Currier, for whom he produced the beautiful Flying Cloud and Great Republic. Gradually, Butterswort h turned more profitable at-