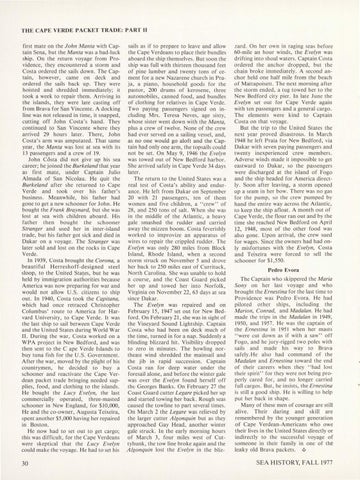 THE CAPE VERDE PACKET TRADE: PART II first mate on the John Manta with Captain Sena, but the Mania was a bad-luck snip. On the return voyage from Providence, they encountered a storm and Costa ordered the sails down. The Captain, however, came on deck and ordered the sails back up. They were hoisted and shredded immediately; it took a week to repair them. Arriving in the islands, they were late casting off from Brava for San Vincente. A docking line was not released in time, it snapped, cutting off John Costa&#39;s hand. They continued to San Vincente where they arrived 29 hours later. There, John Costa&#39;s arm was amputated. That same year, the Manta was lost at sea with its 13 passengers and a crew of 19. John Costa did not give up his sea career; he joined the Burke/and that year as first mate, under Captain Julio Almada of San Nicolau. He quit the Burke/and after she returned to Cape Verde and took over his father&#39;s business. Meanwhile, his father had gone to get a new schooner for John. He bought the Frank Braynard, but she was lost at sea with children aboard. His father then bought the schooner Stranger and used her in inter-island trade, but his father got sick and died in Dakar on a voyage. The Stranger was later sold and lost on the rocks in Cape Verde. In 1939, Costa brought the Corona, a beautiful Herres ho ff-designed steel sloop, to the United States, but he was held by immigration authorities because America was now preparing for war and would not allow U.S. citizens to ship out. In 1940, Costa took the Capitano, which had once retraced Christopher Columbus&#39; route to America for Harvard University, to Cape Verde. It was the last ship to sail between Cape Verde and the United States during World War II. During the war, Costa worked on a WPA project in New Bedford, and was then sent to the C ape Verde Islands to buy tuna fish for the U.S. Government. After the war, moved by the plight of his countrymen, he decided to buy a schooner and reactivate the Cape Verdean packet trade bringing needed supplies, food, and clothing to the islands. He bought the Lucy Evelyn, the last commercially operated, three-masted schooner in New England, for $10,000, He and the co-owner, Augusta Teixeira, spent another $5,000 having her repaired in Boston. He now had to set out to get cargo; this was difficult, for the Cape Verdeans were skeptical that the Lucy Evelyn could make the voyage. He had to set his

sails as if to prepare to leave and allow the Cape Verdeans to place their bundles aboard the ship themselves. But soon the ship was full with thirteen thousand feet of pine lumber and twenty tons of cement for a new Nazarene church in Praja, a piano, household goods for the pastor, 200 drums of kerosene, three automobiles, canned food, and bundles of clothing for relatives in Cape Verde. Two paying passengers signed on including Mrs. Teresa Neves, age sixty, whose sister went down with the Manta, plus a crew of twelve. None of the crew had ever served on a sailing vessel, and, as no one would go aloft and the Captain had only one arm, the topsails could not be set. On May 9, 1946 the Evelyn was towed out of New Bedford harbor. She arrived safely in Cape Verde 34 days later. The return to the United States was a real test of Costa&#39;s ability and endurance. He left from Dakar on September 20 with 21 passengers, ten of them women and five children, a &quot;crew&quot; of 28, and 250 tons of salt. When she was in the middle of the Atlantic, a heavy gale smashed the rudder and carried away the mizzen boom. Costa feverishly worked to improvize an apparatus of wires to repair the crippled rudder. The Evelyn was only 280 miles from Block Island, Rhode Island, when a second storm struck on November 5 and drove her back to 250 miles east of Currituck, North Carolina. She was unable to hold a course, and the Coast Guard picked her up and towed her into Norfolk, Virginia on November 22, 63 days at sea since Dakar. The Evelyn was repaired and on February 15, 1947 set out for New Bedford. On February 21, she was in sight of the Vineyard Sound Lightship . Captain Costa who had been on deck much of the time, turned in for a nap. Suddenly a blinding blizzard hit. Visibility dropped to zero in minutes. The howling northeast wind shredded the mainsail and the jib in rapid succession. Captain Costa ran for deep water under the foresail alone, and before the winter gale was over the Evelyn found herself off tht: Georges Banks. On February 27 the Coast Guard cutter Legare picked her up and started towing her back. Rough seas caused the towline to part several times. On March 2 the Legare was relieved by the larger cutter Algonquin but as they approached Gay Head, another winter gale struck. In the early morning hours of March 3, four miles west of Cuttyhunk, the tow line broke again and the Algonquin lost the Evelyn in the bliz-

zard. On her own in raging seas before 60-mlle an hour winds, the Evelyn was drifting into shoal waters. Captain Costa ordered the anchor dropped, but the chain broke immediately. A second anchor held one half mile from the beach of Mattapoisett. The next morning after the storm ended, a tug towed her to the New Bedford city pier. In late June the Evelyn set out for Cape Verde again with ten passengers and a general cargo. The elements were kind to Captain Costa on that voyage. But the trip to the United States the next year proved disastrous. In March 1948 he left Praia for New Bedford, via Dakar with seven paying passengers and twenty inexperienced crew members. Adverse winds made it impossible to get eastward to Dakar, so the passengers were discharged at the island of Fogo and the ship headed for America directly. Soon after leaving, a storm opened up a seam in her bow. There was no gas for the pump, so the crew pumped by hand the entire way across the Atlantic, to keep the ship afloat. A month out of Cape Verde, the flour ran out and by the time she reached New Bedford on April 12, 1948, most of the other food was also gone. Upon arrival, the crew sued for wages. Since the owners had had only misfortunes with the Evelyn, Costa and Teixeira were forced to sell the schooner for $I ,550. Pedro Evora The Captain who skippered the Maria Sony on her last voyage and who brought the Ernestina for the last time to Providence was Pedro Evora. He had piloted other ships, including the Marion, Conrad, and Mada/an. He had made the trips in the Mada/an in 1949, 1950, and 1957 . He was the captain of the Ernestina in 1951 when her masts &quot;were cut down as if with a saw&quot; off Fogo, and he jury-rigged two poles with sails and made his way to Brava safely.He also had command of the Mada/an and Ernestina toward the end of their careers when they &quot;had lost their spirit&quot; for they were not being properly cared for, and no longer carried full cargos. But, he insists, the Ernestina is still a good ship. He is willing to help put her back in shape. Many of these men of courage are still alive. Their daring and skill are remembered by the younger generation of Cape Verdean-Americans who owe their lives in the United States directly or indirectly to the successful voyage of someone in their family in one of the leaky old Brava packets. w