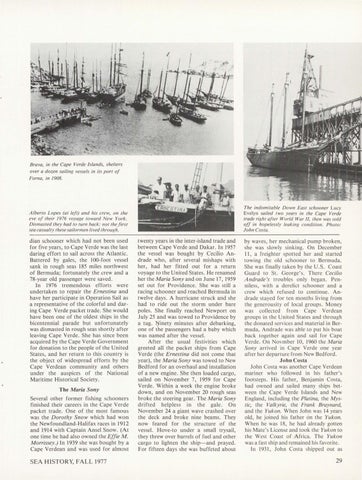 Brava, in the Cape Verde Islands, shelters over a dozen sailing vessels in its port of Forna, in 1908.

\ The indomitable Down East schooner Lucy Alberto Lopes (at left) and his crew, on the eve of their 1976 voyage toward New York. Dismasted they had to turn back: not the first sea casualty these sailormen lived through.

dian schooner which had not been used for five years, to Cape Verde was the last daring effort to sail across the Atlantic. Battered by gales, the 100-foot vessel sank in rough seas 185 miles northwest of Bermuda; fortunately the crew and a 78-year old passenger were saved. In 1976 tremendous efforts were undertaken to repair the Ernestina and have her participate in Operation Sail as a representative of the colorful and daring Cape Verde packet trade. She would have been one of the oldest ships in the bicentennial parade but unfortunately was dismasted in rough seas shortly after leaving Cape Verde. She has since been acquired by the Cape Verde Government for donation to the people of the United States, and her return to this country is the object of widespread efforts by the Cape Verdean community and others under the auspices of the National Mariti~e Historical Society.

The Maria Sony Several other former fishing schooners finished their careers in the Cape Verde packet trade. One of the most famous was the Dorothy Snow which had won the Newfoundland-Halifax races in 1912 and 1914 with Captain Ansel Snow. (At one time he had also owned the Effie M. Morrissey.) In 1939 she was bought by a Cape Verdean and was used for almost

twenty years in the inter-island trade and between Cape Verde and Dakar. In 1957 the vessel was bought by Cecilio Andrade who, after several mishaps with her, had her fitted out for a return voyage to the United States. He renamed her the Maria Sony and on June 17, 1959 set out for Providence. She was still a racing schooner and reached Bermuda in twelve days. A hurricane struck and she had to ride out the storm under bare poles. She finally reached Newport on July 25 and was towed to Providence by a tug. l&#39;:Jinety minutes after debarking, one of the passengers had a baby which was named after the vessel. After the usual festivities which greeted all the packet ships from Cape Verde (the Ernestina did not come that year), the Maria Sony was towed to New Bedford for an overhaul and installation of a new engine. She then loaded cargo, sailed on November 7, 1959 for Cape Verde. Within a week the engine broke down, and on November 20 rough seas broke the steering gear. The Maria Sony drifted helpless in the gale. On November 24 a giant wave crashed over the deck and broke nine beams. They now feared for the structure of the vessel. Hove-to under a small trysail, they threw over barrels of fuel and other cargo to lighten the ship-and prayed . For fifteen days she was buffeted about

by waves, her mechanical pump broken, she was slowly sinking. On December 11, a freighter spotted her and started towing the old schooner to Bermuda. She was finally taken by the U.S. Coast Guard lo St. George&#39;s. There Cecilio Andrade&#39;s troubles only began . Penniless, with a derelict schooner and a crew which refused to continue. Andrade stayed for ten months living from the generousity of local groups. Money was collected from Cape Verdean groups in the United States and through the donated services and material in Bermuda, Andrade was able to put his boat back together again and sail for Cape Verde. On Novmber IO, 1960 the Maria Sony arrived in Cape Verde one year after her departure from New Bedford . John Costa John Costa was another Cape Verdean mariner who followed in his father&#39;s footsteps. His father, Benjamin Costa, had owned and sailed many ships between the Cape Verde Islands and New England, including the Platina, the Mystic, the Valkyrie, the Frank Braynard, and the Yukon. When John was 14 years old, he joined his father on the Yukon. When he was 18, he had already gotten his Mate&#39;s License and took the Yukon to the West Coast of Africa. The Yukon was a fast ship and remained his favorite. In 1931, John Costa shipped out as