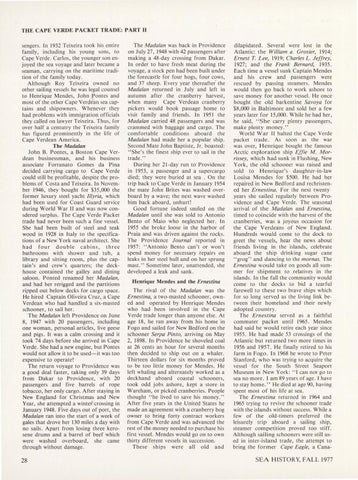 sengers. In 1932 Teixeira took his entire family, including his young sons, to Cape Verde. Carlos, the younger son enjoyed the sea voyage and later became a seaman, carrying on the maritime tradition of the family today. Although Roy Teixeira owned no other sailing vessels he was legal counsel to Henrique Mendes, John Pontes and most of the other Cape Verdean sea captains and shipowners. Whenever they had problems with immigration officials they called on lawyer Teixeira. Thus, for over half a centutry the Teixeira family has figured prominently in the life of Cape Verdean America. The Mada/an John B. Pontes, a Boston Cape Verdean businessman, and his business associate Fortunato Gomes da Pina decided carrying cargo to Cape Verde could still be profitable, despite the problems of Costa and Teixeira. In November I 946, they bought for $35,000 the former luxury steel yacht lllyria, which had been used for Coast Guard service during World War II and was now consdered surplus. The Cape Verde Packet trade had never been such a fine vessel. She had been built of steel and teak wood in 1928 in Italy to the specifications of a New York naval architect. She had four double cabins, three bathrooms with shower and tub, a library and sitting room, plus the captain's and crew's quarters; the deckhouse contained the galley and dining saloon. Ponted renamed her Mada/an, and had her rerigged and the partitions ripped out below decks for cargo space. He hired Captain Oliveira Cruz, a Cape Verdean who had handled a six-masted schooner, to sail her. The Mada/an left Providence on June 8, 1947 with 20 passengers, including one woman, personal articles, live geese and pigs. It was a calm crossing and it took 74 days before she arrived in Cape Verde. She had a new engine, but Pontes would not allow it to be used-it was too expensive to operate! The return voyage to Providence was a good deal faster, taking only 39 days from Dakar to Providence, with 20 passengers and five barrels of rope tobacco, her only cargo. After staying in New England for Christmas and New Year, she attempted a winter crossing in January 1948. Five days out of port, the Mada/an ran into the start of a week of gales that drove her 130 miles a day with no sails. Apart from losing three kerosene drums and a barrel of beef which were washed overboard, she came through without damage.

The Mada/an was back in Providence on July 27, 1948 with 42 passengers after making a 48-day crossing from Dakar. In order to have fresh meat during the voyage, a stock pen had been built under the forecastle for four hogs, four cows, and 37 sheep. Every year thereafterÂˇ the Mada/an returned in July and left in autumn after the cranberry harvest, when many Cape Verdean cranberry pickers would book passage home to visit family and friends. In 1951 the Mada/an carried 48 passengers and was crammed with baggage and cargo. The comfortable conditions aboard the Mada/an had made her a popular ship. Second Mate John Baptiste, Jr. boasted: "She's the finest ship ever to sail in the trade." During her 21-day run to Providence in 1953, a passenger and a supercargo died; they were buried at sea . On the trip back to Cape Verde in January 1954 the mate John Brites was washed overboard by a wave; the next wave washed him back aboard, unhurt! Good fortune indeed smiled on the Mada/an until she was sold to Antonio Bento of Maio who neglected her. In 1955 she broke loose in the harbor of Praia and was driven against the rocks. The Providence Journal reported in 1957: "Antonio Bento can't or won't spend money for necessary repairs on leaks in her steel hull and on her sprung mast." Sometime later, unattended, she developed a leak and sank. Henrique Mendes and the Ernestina

The rival of the Mada/an was the Ernestina, a two-masted schooner, owned and operated by Henrique Mendes who had been involved in the Cape Verde trade longer than anyone else. At age 18, he ran away from his home in Fogo and sailed for New Bedford on the schooner Serpa Pinto, arriving on May 2, 1898. In Providence he shoveled coal at 26 cents an hour for several months then decided to ship out on a whaler. Thirteen dollars for six months proved to be too little money for Mendes. He left whaling and alternately worked as a deckhand aboard coastal schooners, took odd jobs ashore, kept a store in Wareham, or picked cranberries. People thought "he lived to save his money." After five years in the United States he made an agreement with a cranberry bog owner to bring forty contract workers from Cape Verde and was advanced the rest of the money needed to purchase his first vessel. Mendes would go on to own thirty different vessels in succession. These ships were all old and

dilapidated. Several were lost in the Atlantic: the William a. Grosier, 1914; Ernest T. Lee, 1919; Charles L. Jeffrey, 1927; and the Frank Bernard, 1935. Each time a vessel sunk Captain Mendes and his crew and passengers were rescued by passing steamers . Mendes would then go back to work ashore to save money for another vessel. He once bought the old barkentine Savoya for $8,000 in Baltimore and sold her a few years later for 15 ,000. While he had her, he said, "She carry plenty passengers, make plenty money." World War II halted the Cape Verde packet trade. As soon as the war was over, Henrique bought the famous Arctic exploration ship Effie M. Morrissey, which had sunk in Flushing, New York, the old schooner was raised and sold to Henrique's daughter-in-law Louisa Mendes for $500. He had her repaired in New Bedford and rechristened her Ernestina. For the next twenty years she sailed regularly between Providence and Cape Verde. The seasonal arrival of the Mada/an and Ernestina, timed to coincide with the harvest of the cranberries, was a joyous occasion for the Cape Verdeans of New England. Hundreds would come to the dock to greet the vessels, hear the news about friends living in the islands, celebrate aboard the ship drinking sugar cane "grog" and dancing to the mornas. The Ernestina would take on goods alt summer for shipment to relatives in the islands. In the fall the community would come to the docks to bid a tearful farewell to these two brave ships which for so long served as the living link between their homeland and their newly adopted country. The Ernestina served as a faithful commuter packet until 1965. Mendes had said he would retire each year since 1955. He had made 53 crossings of the Atlantic but returned two more times in 1956 and 1957. He finally retired to his farm in Fogo. In 1968 he wrote to Peter Stanford, who was trying to acquire the vessel for the South Street Seaport Museum in New York: "I can not go to sea no more. I am 89 years of age. I have to stay home.'' He died at age 90, having spent most of his life at sea. The Ernestina returned in 1964 and 1965 trying to revive the schooner trade with the islands without success. While a few of the old-timers preferred the leisurely trip aboard a sailing ship, steamer competition proved too stiff. Although sailing schooners were still used in inter-island trade, the attempt to bring the former Cape Eagle, a Cana-

3 IN CLIO'S CAUSE: ON LOOKING BACK, by George Campbell • 6 THE FIRST AND LAST VOYAGE OF THE ST. MARY, by Sandford Hart Low and Peter Throckm...

3 IN CLIO'S CAUSE: ON LOOKING BACK, by George Campbell • 6 THE FIRST AND LAST VOYAGE OF THE ST. MARY, by Sandford Hart Low and Peter Throckm...