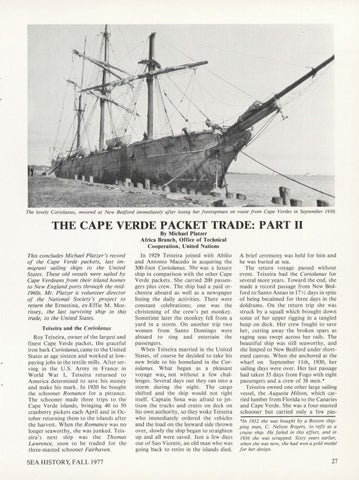 The lovely Coriolanus, moored at New Bedford immediately after losing her foretopmast en route from Cape Verdes in September 1930.

This concludes Michael Platzer&#39;s record of the Cape Verde packets, last immigrant sailing ships to the United States. These old vessels were sailed by Cape Verdeans from their island homes to New England ports through the mid1960s. Mr. Platzer is volunteer director of the National Society&#39;s project to return the Ernestina, ex-Effie M . Morrissey, the last surviving ship in this trade, to the United States. Teixeira and the Coriolanus Roy Teixeira, owner of the largest and finest Cape Verde packet, the graceful iron bark Coriolanus, came to the United States at age sixteen and worked at lowpaying jobs in the textile mills. After serving in the U .S. Army in France in World War I, Teixeira returned to America determined to save his money and make his mark. In 1920 he bought the schooner Romance for a pittance. The schooner made three trips to the Cape Verde islands, bringing 40 to 50 cranberry pickers each April and in October returning them to the islands after the harvest. When the Romance was no longer seaworthy, she was junked . Teixeira&#39;s next ship was the Thomas Lawrence, soon to be traded for the three-masted schooner Fairhaven.

In 1929 Teixeira joined with Abilio and Antonio Macedo in acquiring the 300-foot Coriolanus. She was a luxury ship in comparison with the other Cape Verde packets. She carried 200 passengers plus crew . The ship had a paid orchestra aboard as well as a newspaper listing the daily activities. There were constant celebrations; one was the christening of the crew&#39;s pet monkey. Sometime later the monkey fell from a yard in a storm. On another trip two women from Santo Domingo were aboard to sing and entertain the passengers. When Teixeira married in the United States, of course he decided to take his new bride to his homeland in the Coriolanus. What began as a pleasant voyage was, not without a few challenges. Several days out they ran into a storm during the night. The cargo shifted and the ship would not right itself. Captain Sena was afraid to jettison the trucks and crates on deck on his own authority, so they woke Teixeira who immediately ordered the vehicles and the load on the leeward side thrown over, slowly the ship began to stra ighten up and all were saved . Just a few days out of Sao Vicente, an old man who was going back to retire in the islands died.

A brief ceremony was held for him and he was buried at sea. The return voyage passed without event. Teixeira had the Coriolanus for several more years. Toward the end, she made a record passage from New Bedford to Santo Antao in 17 Yi days in spite of being becalmed for three days in the doldrums . On the return trip she was struck by a squall which brought down .some of her upper rigging in a tangled heap on deck. Her crew fought to save her, cutting away the broken spars as raging seas swept across her rails. The beautiful ship was still seaworthy, and she limped to New Bedford under shortened canvas. When she anchored at the wharf on September 11th, 1930, her sailing days were over. Her last passage had taken 35 days from Fogo with eight passengers and a crew of 38 men.* Teixeira owned one other large sailing vessel, the Augusta Hilton, which carried lumber from Florida to the Canaries and Cape Verde. She was a four-masted schooner but carried only a few pas*In 1932 she was bought by a Boston shipping man, C. Nelson Rogers, to refi1 as a cruise ship. He failed in this effort, and in 1936 she was scrapped. Sixty years earlier, when she was new, she had won a gold medal for her design.