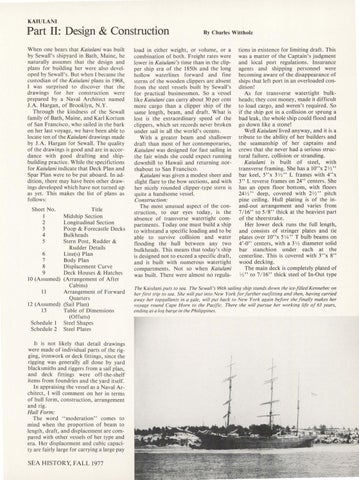 Part II: Design &amp; Construction When one hears that Kaiulani was built by Sewall&#39;s shipyard in Bath, Maine, he naturally assumes that the design and plans for building her were also developed by Sewall&#39;s. But when I became the custodian of the Kaiulani plans in I 968, I was surprised to discover that the drawings for her construction were prepared by a Naval Architect named J .A. Hargan, of Brooklyn , N.Y. Through the kindness of the Sewall family of Bath, Maine, and Karl Kortum of San Francisco, who sailed in the bark on her last voyage, we have been able to locate ten of the Kaiulani drawings made by J .A . Hargan for Sewall. The quality of the drawings is good and are in accordance with good drafting and shipbuilding practice. While the specifictions for Kaiulani indicate that Deck Plan and Spar Plan were to be put aboard. In addition, there may have been other drawings developed which have not turned up as yet. This makes the list of plans as follows: Sheet No . I 2 3 4 5

Title Midship Section Longitudinal Section Poop &amp; Forecastle Decks Bulkheads Stern Post, Rudder &amp; Rudder Details Line(s) Plan 6 7 Body Plan 8 Displacement Curve 9 Deck Houses &amp; Hatches 10 (Assumed) (Arrangement of After Cabins) II Arrangement of Forward Quarters 12 (Assumed) (Sail Plan) 13 Table of Dimensions (Offsets) Schedule I Steel Shapes Schedule 2 Steel Plates It is not likely that detail drawings were made of individual parts of the rigging, ironwork or deck fittings, since the rigging was generally all done by yard blacksmiths and riggers from a sail plan, and deck fittings were off-the-shelf items from foundries and the yard itself. In appraising the vessel as a Naval Architect, I will comment on her in terms of hull form, construction, arrangement and rig. Hull Form: The word &quot;moderation&quot; comes to mind when the proportion of beam to length , draft, and displacement are compared with other vessels of her type and era. Her displacement and cubic capacity are fairly large for carrying a large pay

load in either weight, or volume, or a combination of both . Freight rates were lower in Kaiulani&#39;s time than in the clipper ship era of the 1850s and the long hollow waterlines forward and fine sterns of the wooden clippers are absent from the steel vessels built by Sewall&#39;s for practical businessmen. So a vessel like Kaiulani can carry about 30 per cent more cargo than a clipper ship of the same length, beam, and draft. What is lost is the extraordinary speed of the clippers, which set records never broken under sail in all the world&#39;s oceans. With a greater beam and shallower draft than most of her contemporaries, Kaiulani was designed for fast sailing in the fair winds she could expect running downhill to Hawaii and returning northabout to San Francisco. Kaiulani was given a modest sheer and slight flare to the bow sections, and with her nicely rounded clipper-type stern is quite a handsome vessel. Construction: The most unusual aspect of the construction, to our eyes today, is the absence of transverse watertight compartments. Today one must build a ship to withstand a specific loading and to be able to survive collision and water flooding the hull between any two bulkheads. This means that today&#39;s ship is designed not to exceed a specific draft, and is built with numerous watertight compartments. Not so when Kaiulani was built. There were almost no regula-

tions in existence for limiting draft. This was a matter of the Captain&#39;s judgment and local port regulations. Insurance agents and shipping personnel were becoming aware of the disappearance of ships that left port in an overloaded condition! As for transverse watertight bulkheads; they cost money, made it difficult to load cargo, and weren&#39;t required. So if the ship got in a collision or sprung a bad leak, the whole ship could flood and go down like a stone! Well Kaiulani lived anyway, and it is a tribute to the ability of her builders and the seamanship of her captains and crews that she never had a serious structural failure, collision or stranding. Kaiulani is built of steel, with transverse framing. She has a IO&#39; &#39;x 2 Y2 &#39;&#39; bar keel, 5&quot;x 3 Yi&quot; L frames with 4&quot;x 3&quot; L reverse frames on 24&quot; centers. She has an open floor bottom, with floors 24 Yi&quot; deep, covered with 2 Y2 &quot; pitch pine ceiling. Hull plating is of the inand-out arrangement and varies from 7 / 16&quot; to 5/ 8&quot; thick at the heaviest part of the sheerstrake. Her lower deck runs the full length, and consists of stringer plates and tie plates over IO&quot;x 5 !/.t&quot; T bulb beams on 4&#39;-0&quot; centers, with a 3 Y2 diameter solid bar stanchion under each at the centerline. This is covered with 3&quot;x 8&quot; wood decking. The main deck is completely plated of Yi&#39;&#39; to 7I 16&quot; thick steel of In-Out type

The Kaiulani puts lo sea. The Sewall&#39;s 99th sailing ship stands down the ice-filled Kennebec on her first trip to sea. She will put into New York for further outfilling and then, having carried away her lopgallanls in a gale, will put back to New York again before she finally makes her voyage round Cape Horn to the Pacific. There she will pursue her working life of 63 years, ending as a log barge in the Philippines.