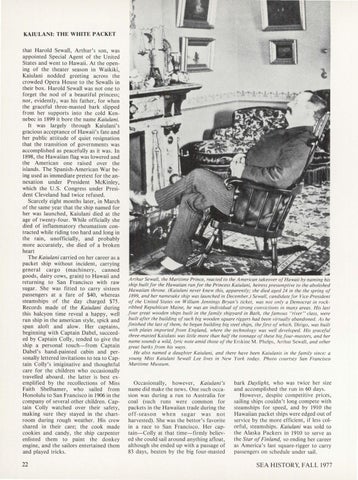 that Harold Sewall, Arthur&#39;s son, was appointed Special Agent of the United States and went to Hawaii. At the opening of the theater season in Waikiki, Kaiulani nodded greeting across the crowded Opera House to the Sewalls in their box. Harold Sewall was not one to forget the nod of a beautiful princess; nor, evidently, was his father, for when the graceful three-masted bark slipped from her supports into the cold Kennebec in 1899 it bore the name Kaiulani. It was largely through Kaiulani&#39;s gracious acceptance of Hawaii&#39;s fate and her public attitude of quiet resignation that the transition of governments was accomplished as peacefully as it was . In 1898, the Hawaiian flag was lowered and the American one raised over the islands. The Spanish-American War being used as immediate pretext for the annexation under President McKinley, which the U.S. Congress under President Cleveland had twice refused. Scarcely eight months later, in March of the same year that the ship named for her was launched, Kaiulani died at the age of twenty-four. While officially she died of inflammatory rheumatism contracted while riding too hard and long in the rain, unofficially, and probably more accurately, she died of a broken heart The Kaiulani carried on her career as a packet ship without incident, carrying general cargo (machinery, canned goods, dairy cows, grain) to Hawaii and returning to San Francisco with raw sugar. She was fitted to carry sixteen passengers at a fare of $40, whereas steamships of the day charged $75. Records made of the Kaiulani during this halcyon time reveal a happy, well run ship in the american style, spick and span aloft and alow. Her captains, beginning with Captain Dabe!, succeeded by Captain Colly, tended to give the ship a personal touch-from Captain Dabel&#39;s hand-painted cabin and personally lettered invitations to tea to Captain Colly&#39;s imiginative and thoughtful care for the children who occasionally travelled aboard. the latter is best exemplified by the recollections of Miss Faith Shelhamer, who sailed from Honolulu to San Francisco in 1906 in the company of several other children. Captain Colly watched over their safety, making sure they stayed in the chartroom during rough weather. His crew shared in their care; the cook made cookies and candy, the ship carpenter enlisted them to paint the donkey engine, and the sailors entertained them and played tricks.

Arthur Sewall, the Maritime Prince, reacted to the American takeover of Hawaii by naming his ship built for the Hawaiian run for the Princess Kaiulani, heiress presumptive to the abolished Hawaiian throne. (Kaiulani never knew this, apparently; she died aged 24 in the the spring of 1899, and her namesake ship was launched in December.) Sewall, candidate for Vice-President of the United Stales on William Jennings Bryan&#39;s ticket, was not only a Democrat in rockribbed Republican Maine, he was an individual of strong convictions in many areas. His last four great wooden ships built in the family shipyard in Bath, the famous &quot;river &quot; class, were built after the building of such big wooden square riggers had been virtually abandoned. As he finished the last of them, he began building big steel ships, the first of which, Dirigo, was built with plates imported from England, where the technology was well developed. His graceful three-masted Kaiulani was Iii/le more than half the tonnage of these big four-masters, and her name sounds a wild, lyric note amid those of the Erskine M. Phelps, Arthur Sewall, and other great barks from his ways. He also named a daughter Kaiulani, and there have been Kaiulanis in the family since: a young Miss Kaiulani Sewall Lee lives in New York today. Photo courtsey San Francisco Maritime Museum.

Occasionally, however, Kaiulani&#39;s name did make the news. One such occasion was during a run to Australia for coal (such runs were common for packets in the Hawaiian trade during the off-season when sugar was not harvested). She was the bettor&#39;s favorite in a race to San Francisco. Her captain-Colly at that time-firmly believed she could sail around anything afloat, although she ended up with a passage of 83 days, beaten by the big four-masted

bark Daylight, who was twice her size and accomplished the run in 60 days. However, despite competitive prices, sailing ships couldn&#39;t long compete with steamships for speed, and by 1910 the Hawaiian packet ships were edged out of service by the more efficient, if less colorful, steamships. Kaiulani was sold to the Alaska Packers in 1910 to serve as the Star of Finland, so ending her career as America&#39;s last square-rigger to carry passengers on schedule under sail.