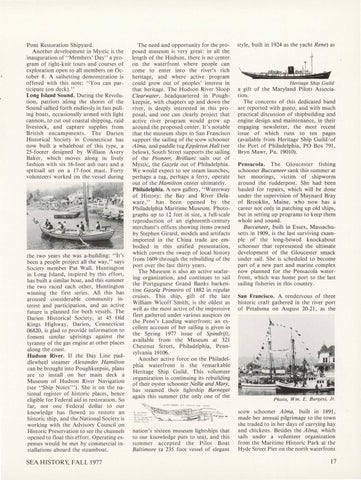 Pont Restoration Shipyard. Another development in Mystic is the inauguration of &quot;Members&#39; Day&quot; a program of tight-knit tours and courses of exploration open to all members on October 8. A sailsetting demonstration is offered with this note: &quot;You can participate (on deck).&quot; Long Island Sound. During the Revolution, patriots along the shores of the Sound sallied forth endlessly in fast pulling boats, occasionally armed with light cannon, to cut out coastal shipping, raid livestock, and capture supplies from British encampments. The Darien Historical Society in Connecticut has now built a whaleboat of this type, a 25-footer designed by William Avery Baker, which moves along in lively fashion with six 16-foot ash oars and a spritsail set on a 17-foot mast. Forty volunteers worked on the vessel during

the two years she was a-building: &quot;it&#39;s been a people project all the way,&quot; says Society member Pat Wall. Huntington in Long Island, inspired by this effort, has built a similar boat, and this summer the two raced each other, Huntington winning the first series. All this has aroused considerable community interest and participation, and an active future is planned for both vessels. The Darien Historical Society, at 45 Old Kings Highway, Darien, Connecticut 06820, is glad to provide information to foment similar uprisings against the tyranny of the gas engine at other places along Âˇthe coast. Hudson River. If the Day Line paddlewheel steamer Alexander Hamilton can be brought into Poughkeepsie, plans are to install on her main deck a Museum of Hudson River Navigation (see &quot;Ship Notes&#39;&quot;). She is on the national register of historic places, hence eligible for Federal aid in restoration. So far, not one Federal dollar to our knowledge has flowed to restore an historic ship, and the National Society is working with the Advisory Council on Historic Preservation to see the channels opened to float this effort. Operating expenses would be met by commercial installations aboard the steamboat.

The need and opportunity for the proposed museum is very great: in all the length of the Hudson, there is no center on the waterfront where people can come to enter into the river&#39;s rich heritage, and where active program could grow out of peoples&#39; interest in that heritage . The Hudson River Sloop Clearwater, headquartered in Poughkeepsie, with chapters up and down the river, is deeply interested in this proposal, and one can clearly project that active river program would grow up around the proposed center. It&#39;s notable that the museum ships in San Francisco support the sailing of the scow schooner A Ima, and paddle tug Epp!eton Hall (see below), South Street supports the sailing of the Pioneer, Brilliant sails out of Mystic, the Gaze/a out of Philadelphia. We would expect to see steam launches, perhaps a tug, perhaps a ferry, operate out of the Hamilton center ultimately. Philadelphia. A new gallery, &quot;Waterway of History: the Bay and River Delaware,&quot; has been ope.ned by the Philadelphia Maritime Museum. Photographs up to 12 feet in size, a full-scale reproduction of an eighteenth-century merchant&#39;s offices showing items owned by Stephen Girard, models and artifacts imported in the China trade are embodied in this unified presentation, which covers the sweep of local history from 1609 through the rebuilding of the port over the last thirty years. The Museum is also an active seafaring organization, and continues to sail the Portguguese Grand Banks barkentine Gaze/a Primeiro of 1882 in regular cruises. This ship, gift of the late William Wicoff Smith, is the oldest as well as the most active of the impressive fleet gathered under various auspices on the Penn&#39;s Landing waterfront; an excellent account of her sailing is given in the Spring 1977 issue of Spindrift, available from the Museum at 321 Chestnut Street, Philadelphia, Pennsylvania 19106. Another active force on the Philadelphia waterfront is the remarkable Heritage Ship Guild. This volunteer organization is continuing its rebuilding of their oyster schooner Nellie and Mary, has Âˇ steamed their lightship Barnegat again this summer (the only one of the

nation&#39;s sixteen museum lightships that to our knowledge puts to sea), and this summer accepted the Pilot Boat Baltimore (a 235 foot vessel of elegant

a gift of the Maryland Pilots Association. The concerns of this dedicated band are reported with gusto, and with much practical discussion of shipbuilding and engine design and maintenance, in their engaging newsletter, the most recent issue of which runs to ten pages (available from Heritage Ship Guild / of the Port of Philadelphia, PO Box 791, Bryn Mawr, Pa. 19010). Pensacola. The Gloucester fishing schooner Buccaneer sank this summer at her moorings, victim of shipworm around the rudderpost. She had been hauled for repairs, which will be done under the supervision of Maynard Bray of Brooklin, Maine, who now has a career not only in patching up old ships, but in setting up programs to keep them whole and sound. Buccaneer, built in Essex, Massachusetts in 1909, is the last surviving example of the long-bowed knockabout schooner that represented the ultimate development of the Gloucester smack under sail. She is scheduled to become part of a new part and marine complex now planned for the Pensacola waterfront, which was home port to the last sailing fisheries in this country. San Francisco. A rendezvous of three historic craft gathered in the river port of Petaluma on August 20-21, as the

scow schooner Alma, built in 1891, made her annual pilgrimage to the town she traded to in her days of carrying hay and chickens. Besides the Alma, which sails under a volunteer organization from the Maritime Historic Park at the Hyde Street Pier on the north waterfront