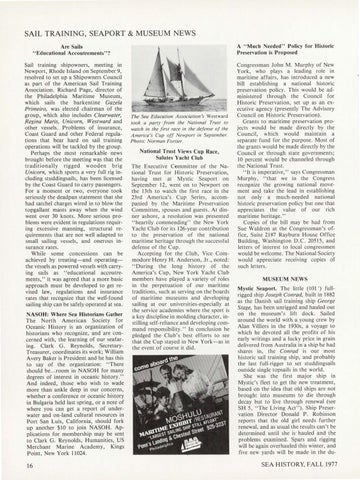 Are Sails &quot;Educational Accoutrements&quot;? Sail training shipowners, meeting in Newport, Rhode Island on September 9, resolved to set up a Shipowners Council as part of the American Sail Training Association. Richard Page, director of the Philadelphia Maritime Museum, which sails the barkentine Gaze/a Primeiro, was elected chairman of the group, which also includes Clearwater, Regina Maris, Unicorn, Westward and other vessels. Problems of insurance, Coast Guard and other Federal regulations that bear hard on sail training operations will be tackled by the group. Perhaps the most remarkable news brought before the meeting was that the traditionally rigged wooden brig Unicorn, which sports a very full rig including studdingsails, has been licensed by the Coast Guard to carry passengers. For a moment or two, everyone took seriously the deadpan statement that she had satchel charges wired in to blow the topgallant masts away when the wind went over 30 knots. More serious problems were evident in regulations requiring excessive manning, structural requirements that are not well adapted to small sailing vessels, and onerous insurance rates . While some concessions can be achieved by treating-and operatingthe vessels as powered vessels with carrying sails as &quot;educational accoutrements,&quot; it was agreed that a more basic approach must be developed to get revised law, regulations and insurance rates that recognize that the weli-found sailing ship can be safely operated at sea. NASOH: Where Sea Historians Gather The North American Society for Oceanic History is an organization of historians who recognize, and are concerned with, the learning of our seafaring. Clark G. Reynolds, SecretaryTreasurer, coordinates its work; William Avery Baker is President and he has this to say of the organization: &quot;There should be ... room in NASOH for many degrees of interest in oceanic history .&quot; And indeed, those who wish to wade more than ankle deep in our concerns, whether a conference or oceanic history in Bulgaria held last spring, or a note of where you can get a report of underwater and on-land cultural resources in Port San Luis, California, should fork up another $10 to join NASOH. Applications for membership may be sent to Clark G. Reynolds, Humanities, US Merchant Marine Academy, Kings Point , New York 11024.

The Sea Education Association&#39;s Westward took a party from the National Trust to watch in the first race in the defense of the America&#39;s Cup off Newport in September. Photo: Norman Fortier.

National Trust Views Cup Race, Salutes Yacht Club The Executive Committee of the National Trust for Historic Preservation, having met at Mystic Seaport on September 12, went on to Newport on the 13th to watch the first race in the 23rd America&#39;s Cup Series, accompanied by the Maritime Preservation Committee, spouses and guests.-At dinner ashore, a resolution was presented &quot;heartily commending&quot; the New York Yacht Club for its 126-year contribution to the preservation of the national maritime heritage through the successfu l defense of the Cup. Accepting for the Club, Vice Commodore Henry H . Anderson, Jr., noted: &quot;During the lohg history of the America&#39;s Cup, New York Yacht Club members have played a variety of roles in the perpetuation of our maritime traditions, such as serving on the boards of maritime museums and developing sailing at our universities-especially at the service academies where the sport is a key discipline in molding character, instilling self-reliance and developing command responsibility . &quot; In conclusion he pledged the Club&#39;s best efforts to see that the Cup stayed in New York-as in the event of course it did.

Congressman John M. Murphy of New York, who plays a leading role in maritime affairs, has introduced a new bill establishing a national historic preservation policy. This would be administered through the Council for Historic Preservation, set up as an executive agency (presently The Advisory Council on Historic Preservation) . Grants to maritime preservation projects would be made directly by the Council, which would maintain a separate fund for the purpose. Most of the grants would be made directly by the Council or through state governments; 10 percent would be channeled through the National Trust. &quot;It is imperative,&quot; says Congressman Murphy, &quot;that we in the Congress recognize the growing national movement and take the lead in establishing not only a much-needed national historic preservation policy but one that appreciates the value of our rich maritime heritage.&#39;&#39; Copies of the bill may be had from Sue Waldron at the Congressman&#39;s office, Suite 2187 Rayburn House Office Building, Washington D.C . 20515, and letters of interest to local congressmen would be welcome. The National Society would appreciate receiving copies of such letters. MUSEUM NEWS Mystic Seaport. The little (IOI &#39;) fullrigged ship Joseph Conrad, built in 1882 as the Danish sail training ship George Stage, has been unrigged and hauled out on the museum&#39;s lift dock. Sailed around the world with a young crew by Alan Villiers in the 1930s, a voyage to which he devoted all the profits of his early writings and a lucky price in grain delivered from Australia in a ship he had shares in, the Conrad is our most historic sai l training ship, and probably the last full-rigger to set studdingsails outside single topsails in the world. She was the first major ship in Mystic&#39;s fleet to get the new treatment, based on the idea that old ships are not brought into museums to die through decay but to live through renewal (see SH 5, &quot;The Living Act&quot;). Ship Preservation Director Donald P . Robinson reports that the old girl needs further renewal, and as usual the results can&#39;t be determined until she is hauled and the problems examined. Spars and rigging will be again overhauled this winter, and five new yards will be made in the du-