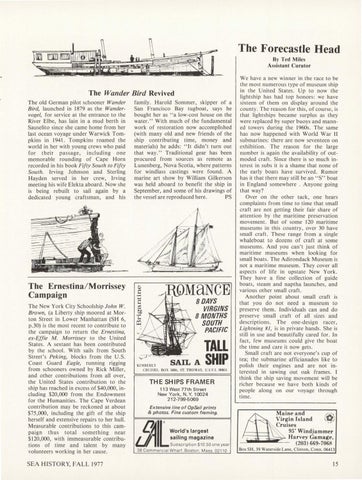 The Wander Bird Revived The old German pilot schooner Wander Bird, launched in 1879 as the Wandervoge/, for service at the entrance to the River Elbe, has lain in a mud berth in Sauselito since she came home from her last ocean voyage under Warwick Tompkins in 1941. Tompkins roamed the world in her with young crews who paid for their passage, including one memorable rounding of Cape Horn recorded in his book Fifty South to Fifty South. Irving Johnson and Sterling Hayden served in her crew, Irving meeting his wife Elekta aboard . Now she is being rebuilt to sail again by a dedicated young craftsman, and his

family. Harold Sommer, skipper of a San Francisco Bay tugboat, says he bought her as &quot;a low-cost house on the water.&quot; With much of the fundamental work of restoration now accomplished (with many old and new friends of the ship contributing time, money and materials) he adds: &quot;It didn&#39;t turn out that way.&quot; Traditional gear has been procured from sources as remote as Lunenberg, Nova Scotia, where patterns for windlass castings were found. A marine art show by William Gilkerson was held aboard to benefit the ship in September, and some of his drawings of the vessel are reproduced here. PS

The Ernestina/Morrissey Campaign The New York City Schoolship John W. Brown, (a Liberty ship moored at Morton Street in Lower Manhattan (SH 6, p.30) is the most recent to contribute to the campaign to return the Ernestina, ex-Effie M. Morrissey to the United States. A sextant has been contributed by the school. With sails from South Street&#39;s Peking, blocks from the U.S. Coast Guard Eagle, running rigging from schooners owned by Rick Miller, and other contributions from all over, the United States contribution to the ship has reached in excess of $40,000, including $20,000 from the Endowment for the Humanities. The Cape Verdean contribution may be reckoned at about $75,000, including the gift of the ship herself and extensive repairs to her hull. Measurable contributions to this campaign thus total something near $120,000, with immeasurable contributions of time and talent by many volunteers working in her cause.

We have a new winner in the race to be the most numerous type of museum ship in the United States. Up to now the lightship has had top honors: we have sixteen of them on display around the county. The reason for this, of course, is that lightships became surplus as they were replaced by super buoys and manned towers during the 1960s. The same has now happened with World War II submarines: there are now seventeen on exhibition. The reason for the large number is again the availability of outmoded craft. Since there is so much interest in subs it is a shame that none of the early boats have survived. Rumor has it that there may still be an &quot;S&quot; boat in England somewhere . Anyone going that way? Over on the other tack, one hears complaints from time to time that small craft are not getting their fair share of attention by the maritime preservation movement. But of some 120 maritime museums in this country, over 30 have small craft. These range from a single whaleboat to dozens of craft at some museums. And you can&#39;t just think of maritime museums when looking for small boats. The Adirondack Museum is not a maritime museum. They cover all aspects of life in upstate New York. They have a fine collection of guide boats, steam and naptha launches, and various other small era ft. Another point about small craft is that you do not need a museum to preserve them. Individuals can and do preserve small craft of all sizes and descriptions. The one-design racer, Lightning #/, is in private hands. She is still in use and beau ti fully cared for. In fact, few museums could give the boat the time and care it now gets . Small craft are not everyone&#39;s cup of tea; the submarine afficianados like to polish their engines and are not interested in sawing out oak frames. I think the ship saving movement will be richer because we have both kinds of people along on our voyage through time.