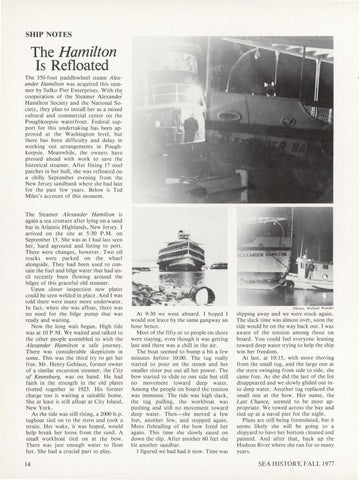 The Hamilton Is Refloated The 350-foot paddlewheel steam Alexander Hamilton was acquired this summer by Sulko Pier Enterprises. With the cooperation of the Steamer Alexander Hamilton Society and the National Society, they plan to install her as a mixed cultural and commercial center on the Poughkeepsie waterfront. Federal support for this undertaking has been approved at the Washington level , but there has been difficulty and delay in working out arrangements in Poughkeepsie . Meanwhile, the owners have pressed ahead with work to save the historical steamer. After fitting 17 steel patches in her hull , she was refloated o n a chilly September evening from the New Jersey sandbank where she had lain for the past few years. Below is Ted Miles&#39;s account of this moment.

The Steamer Alexander Hamilton is again a sea creature after lying on a sand bar in Atlantic Highlands , New Jersey . I arrived on the site at 5: 30 P. M. on September 15 . She was as I had last seen her, hard aground and li sting to port. There were changes, however. Two oil trucks were parked on the wharf alongside. They had been used to contain the fuel and bilge water that had until recently been flowing around the bilges of this graceful old steamer. Upon closer inspection new plates could be seen welded in place. And I was told there were many more underwater. In fact, when she was afloat, there was no need for the bilge pump that was ready and waiting. Now the long wait began. High tide was at 10 P.M. We waited and talked to the other people assembled to wish the Alexander Hamilton a safe journey. There was considerable skepticism in some. This was the third try to get her free. Mr. Henry Gehlaus, former owner of a similar excursion steamer, the City of Keansburg, was on hand . He had faith in the strength in the old plates riveted together in 1923 . His former charge too is waiting a suitable home. She at least is still afloat at City Island, New York. As the tide was still risi ng, a 2000-h.p. tugboat tied on to the stern and took a strain. Her wake, it was hoped, would help break her loose from the sand. A small workboat tied on at the bow. There was just enough water to float her. She had a crucial part to play.

At 9:30 we went aboard. I hoped I would not leave by the same ga ngwa y an hour hence . Most of the fifty or so people on shore were staying, even thou gh it was getting late and there was a chill in the air. The boat seemed to bump a bit a few minutes before 10:00. The tug really started to pour on the steam and her smaller sister put out all her power. The bow started to slide to one side but still no movement toward deep water. Among the people on board the tension was immense. The tide was high slack, the tug pulling, the workboat was pushing and still no movement toward deep water. Then-sh e moved a few feet, another few, and stopped again. More fishtailing of the bow freed her again. This time she slowly eased on down the slip. After another 60 feet she hit another sand bar. I figured we had had it now. Time was

slipping away and we were stuck again. The slack time was almost over, soo n the tide would be on the way back out. I was aware of the tension among those on board. You could feel everyone lea ning toward deep water trying to help the ship win her freedom. At last, at 10:15, with . more shoving from the small tug, and the large one at the stern swingi ng from side to side, she came free . As she did the last of the list disappeared and we slowly glided out into deep water. Another tug replaced the sma-ll one at the bow . Her name, the Last Chance, seemed to be most appropriate. We towed across the bay and tied up at a naval pier for the night. Plans are still being formulated, but it Âˇseems likely she will be going to a sh ipyard to have her bottom cleaned and painted. And after that, back up the Hudson River where she ran for so many years.