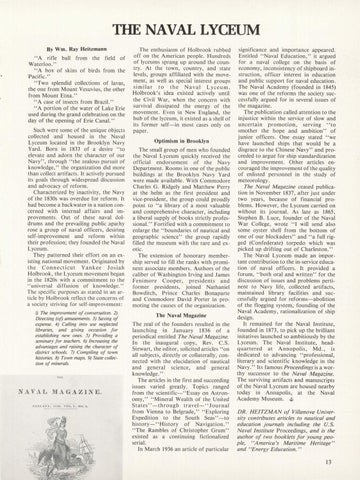 &quot;A rifle ball from the field of Waterloo.&quot; &quot;A box of skins of birds from the Pacific.&quot; &quot;Two splendid collections of lavas, the one from Mount Vesuvius, the other from Mount Etna.&quot; &quot;A case of insects from Brazil. &quot; &quot;A portion of the water of Lake Erie used during the grand celebration on the day of the opening of Erie Canal.&quot; Such were some of the unique objects collected and housed in the Naval Lyceum located in the Brooklyn Navy Yard. Born in 1833 of a desire &quot;to elevate and adorn the character of our Navy&quot;, through &quot;the zealous pursuit of knowledge,&quot; the organization did more than collect artifacts. It actively pursued its goals through widespread discussion and advocacy of reform. Characterized by inactivity, the Navy of the 1830s was overdue for reform . It had become a backwater in a nation concerned with internal affairs and improvements . Out of these naval doldrums and the prevailing public apathy rose a group of naval officers, desiring self-improvement and reform within their profession; they founded the Naval Lyceum. They patterned their effort on an existing national movement. Originated by the Connecticut Yankee Jo s iah Holbrook, the Lyceum movement began _in the 1820s with a commitment to the &quot;universal diffusion of knowledge.&quot; The specific purposes as stated in an article by Holbrook reflect the concerns of a society striving for self-improvement: /) The improvement of conversation. 2) Directing (of) amusements. 3) Saving of expense. 4) Calling into use neglected libraries, and giving occasion for establishing new ones. 5) Providing a seminary for teachers. 6) Increasing the advantages and raising the character of district schools. 7) Compiling of town histories. 8) Town maps. 9) Stale collection of minerals. Tllf;

The enthusiasm of Holbrook rubbed off on the American people. Hundreds of lyceums sprang up around the country. At the town, country, and state levels, groups affiliated with the movement, as well as special interest groups similar to the Naval Lyceum. Holbrook&#39;s idea existed actively until the Civil War, when the concern with survival dissipated the energy of the movement. Even in New England, the hub of the lyceum , it existed as a shell of its former self-in most cases only on paper. Optimism in Brooklyn

The small group of men who founded the Naval Lyceum quickly received the official endorsement of the Navy Department. Rooms in one of the public buildings at the Brooklyn Navy Yard were made availab le. With Commodore Charles G. Ridgely and Matthew Perry at the helm as the first president and vice-president, the group could proudly point to &quot;a library of a most valuable and comprehensive character, including a liberal supply of books strictly professional.&quot; Fortified with a commitment to enlarge the &quot;boundaries of nautical and geographic science&quot; the group rapidly filled the museum with the rare and exotic. The extension of honorary membership served to fill the ranks with prominent associate members . Authors of the caliber of Washington Irving and James Fenimore Cooper, presidents and former presidents, joined Nathaniel Bowditch, Prince Charles Bonaparte and Commodore David Porter in promoting the causes of the organization. The Naval Magazine

The zeal of the founders resulted in the launching in January 1836 of a periodical entitled The Naval Magazine. In the inaugural copy, Rev . C.S. Stewart, the editor, solicited articles &quot;on all subjects, directly or collaterally, connected with the elucidation of nautical and general science, and general knowledge. &#39;&#39; The articles in the first and succeeding issues varied greatly. Topics ranged from the scientific-&quot;Essay on Astronomy,&quot; &quot;Mineral Wealth of the United States&quot; -through travel-&quot; Journal from Vienna to Belgrade,&quot; &quot;Exploring Expedition to the South Seas&quot;-to history-&#39;&#39; History of Navigation .&#39;&#39; &quot;The Rambles of Christopher Grum&quot; existed as a continuing fictiona lized serial. In March 1936 an article of particular

significance and importance appeared. Entitled &quot;Naval Education,&quot; it argued for a naval college on the basis of economy, inconsistency of shipboard instruction, officer interest in education and public support for naval education. The Naval Academy (founded in 1845) was one of the reforms the society successfully argued for in several issues of the magazine. The publication called attention to the injustice within the service of slow and uncertain promotion, serving &quot;to smother the hope and ambition&quot; of junior officers. One essay stated &quot;we have launched ships that would be a disgrace to the Chinese Navy&quot; and proceeded to argue for ship standardization and improvement. Other articles encouraged the improvement of the quality of enlisted personnel in the study of meteorology . The Naval Magazine ceased publication in November 1837, after just under two years, because of financial problems. However, the Lyceum carried on without its journal. As late as 1865, Stephen B. Luce, founder of the Naval War College, wrote &quot;I will send also some oyster shell from the bottom of one of our blockaders&quot; and &quot;a full rigged (Confederate) torpedo which was picked up drifting out of Charleston .&quot; The Naval Lyceum made an important contribution to the in-service education of naval officers. It provided a forum, &quot;both oral and written&quot; for the discussion of issues and problems pertinent to Navy life, collected artifacts, maintained library facilities and successfully argued for reforms-abolition of the flogging system, founding of the Naval Academy, rationalization of ship design. It remained for the Naval Institute, founded in 1873, to pick up the brilliant initatives launched so ambitiously by the Lyceum . The Naval Institute, headquartered at Annopolis, Md ., is dedicated to advancing &quot;professional , literary and scientific knowledge in the Navy.&quot; Its famous Proceedings is a worthy successor to the Naval Magazine. The surviving artifacts and manuscripts of the Naval Lyceum are housed nearby today in Annapolis, at the Naval Academy Museum. .t

DR. HEITZMAN of Villanova University contributes articles to nautical and education journals including the U.S. Naval Institute Proceedings, and is the author of two booklets for young people, &quot;America&#39;s Maritime Heritage&quot; and &quot;Energy Education. &quot; 13