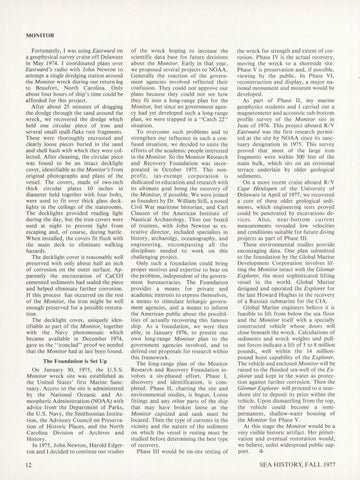 Fortunately, I was using Eastward on a geophysical survey cruise off Delaware in May 1974. I coordinated plans over Eastward&#39;s radio with John Newton to attempt a single dredging station around the Monitor wreck during our return leg to Beaufort, North Carolina. Only about four hours of ship&#39;s time could be afforded for this project. After about 25 minutes of dragging the dredge through the sand around the wreck, we recovered the dredge which held one circular piece of iron and several small spall-flake rust fragments. These were thoroughly encrusted and clearly loose pieces buried in the sand and shell hash with which they were collected . After cleaning, the circular piece was found to be an intact decklight cover, identifiable as the Monitor&#39;s from original photographs and plans of the vessel. The covers, made of two-inch thick circular plates IO inches in diameter held together with four bolts, were used to fit over thick glass decklights in the ceilings of the staterooms. The decklights provided reading light during the day, but the iron covers were used at night to prevent light from escaping and, of course, during battle. When installed, the covers fit flush with the main deck to eliminate walking hazards. The decklight cover is reasonably well preserved with only about half an inch of corrosion on the outer surface. Apparently the encrustation of CaC03 cemented sediments had sealed the piece and helped eliminate further corrosion. If this process has occurred on the rest of the Monitor, the iron might be well enough preserved for a possible restoration. The decklight cover, uniquely identifiable as part of the Monitor, together with the Navy photomosaic which became available in December 1974, gave us the &quot;ironclad&quot; proof we needed that the Monitor had at last been found . The Foundation is Set Up On January 30, 1975, the U.S.S. Monitor wreck site was established as the United States&#39; first Marine Sanctuary. Access to the site is administered by the National Oceanic and Atmospheric Administration (NOAA) with advice from the Department of Parks, the U.S. Navy, the Smithsonian Institution, the Advisory Council on Preservation of Historic Places, and the North Carolina Division of Archives and History. In 1975, John Newton, Harold Edgerton and I decided to continue our studies

of the wreck hoping to increase the scientific data base for future decisions about the Monitor. Early in that year, we proposed several projects to NOAA . Generally the reaction of the government agencies involved Âˇreflected their confusion. They could not approve our plans because they could not see how they fit into a long-range plan for the Monitor, but since no government agency had yet developed such a long-range plan, we were trapped in a &quot;Catch 22&quot; situation . To overcome such problems and to strengthen our influence in such a confused situation, we decided to unite the efforts of the academic people interested in the Monitor. So the Monitor Research and Recovery Foundation was incorporated in October 1975 . This nonprofit, tax-exempt corporation is dedicated to education and research with its ultimate goal being the recovery o&#39;f the Monitor, if possible. We were joined as founders by Dr. William Still, a noted Civil War maritime historian, and Carl Clausen of the American Institute of Nautical Archaeology. Thus our board of trustees, with John Newton as executive director, included specialists in history, archaeolgy, oceanography, and engineering, encompassing all the disciplines needed to work on this challenging project. Only such a foundation could bring proper motives and expertise to bear on the problem, independent of the government bureaucracies. The Foundation provides a means for private and academic interests to express themselves, a means to stimulate lethargic government agencies, and a means to inform the American public about the possibilities of actually recovering this famous ship. As a foundation, we were then able, in January 1976, to present our own long-range Monitor plan to the government agencies involved, and to defend our proposals for research within this framework. The long-range plan of the Monitor Research and Recovery Foundation involves a six-phased effort. Phase I, discovery and identification, is completed. Phase II, charting the site and environmental studies, is begun. Loose fittings and any other parts of the ship that may have broken loose as the Monitor capsized and sank must be located. Then the type of currents in the vicinity and the nature of the sediment on which the vessel is resting must be studied before determining the best type of recovery. Phase III would be on-site testing of

the wreck for strength and extent of corrosion. Phase IV is the actual recovery, moving the wreck to a shoreside site. Phase V is preservation and, if possible, viewing by the public. In Phase VI , reconstruction and display, a major national monument and museum would be developed . As part of Phase II, my marine geophysics students and I carried out a magnetometer and accoustic sub-bottom profile survey of the Monitor site in June of 1976. This project aboard R/ V Eastward was the first research permitted at the site by NOAA since its sanctuary designation in 1975. This survey proved that most of the large iron fragments were within 300 feet of the main hulk, which sits on an erosional terrace underlain by older geological sediments. On a more recent cruise aboard R/ V Cape Henlopen of the University of Delaware in April of 1977, we recovered a core of these older geological sediments, which engineering tests proved could be penetrated by excavations devices. Also, near-bottom current measurements revealed low velocities and conditions suitable for future diving projects as part of Phase II I. These environmental studies provide encouraging data. One plan submitted to the foundation by the Global Marine Development Corporation involves lifting the Monitor intact with the Glomar Explorer, the most sophisticated lifting vessel in the world . Global Marine designed and operated the Explorer for the late Howard Hughes in the recovery of a Russian submarine for the CIA . Global Marine engineers believe it is feasible to lift from below the sea floor and the Monitor itself with a specially constructed vehicle whose doors will close beneath the wreck. Calculations of sediments and wreck weights and pullout forces indicate a lift of 5 to 8 million pounds, well within the 14 millionpound hoist capability of the Explorer. The vehicle and enclosed Monitor will be raised to the flooded sea-well of the Explorer and kept in the water as protection against further corrosion . Then the Glomar Explorer will proceed to a nearshore site to deposit its prize within the vehicle. Upon dismantling from the top, the vehicle could become a semipermanent, shallow-water housing of the Monitor for Phase V. At this stage the Monitor would be a very visible historic artifact. Her preservation and eventual restoration would, we believe, enlist widespread public support. .t