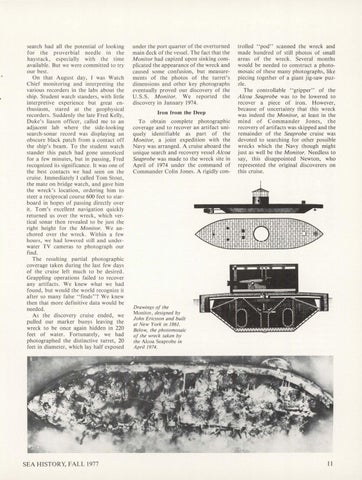 search had all the potential of looking for the proverbial needle in the haystack, especially with the time available. But we were committed to try our best. On that August day, I was Watch Chief monitoring and interpreting the various recorders in the labs about the ship. Student watch standers, with little interpretive experience but great enthusiasm, stared at the geophysical recorders. Suddenly the late Fred Kelly, Duke&#39;s liason officer, called me to an adjacent lab where the side-looking search-sonar record was displaying an obscure black patch from a contact off the ship&#39;s beam. To the student watch stander this patch had gone unnoticed for a few minutes, but in passing, Fred recognized its significance. It was one of the best contacts we had seen on the cruise. Immediately I called Tom Stout, the mate on bridge watch, and gave him the wreck&#39;s location, ordering him to steer a reciprocal course 600 feet to starboard in hopes of passing directly over it. Tom&#39;s excellent navigation quickly returned us over the wreck, which vertical sonar then revealed to be just the right height for the Monitor. We anchored over the wreck. Within a few hours, we had lowered still and underwater TV cameras to photograph our find. The resulting partial photographic coverage taken during the last few days of the cruise left much to be desired. Grappling operations failed to recover any artifacts. We knew what we had found, but would the world recognize it after so many false &quot;finds&quot;? We knew then that more definitive data would be needed. As the discovery cruise ended, we pulled our marker buoys leaving the wreck to be once again hidden in 220 feet of water. Fortunately, we had photographed the distinctive turret, 20 feet in diameter, which lay half exposed

under the port quarter of the overturned main deck of the vessel. The fact that the Monitor had capized upon sinking complicated the appearance of the wreck and caused some confusion, but measurements of the photos of the turret&#39;s dimensions and other key photographs eventually proved our discovery of the U.S.S. Monitor. We reported the discovery in January 1974. Iron from the Deep To obtain .c omplete photographic coverage and to recover an artifact uniquely identifiable as part of the Monitor, a joint expedition with the Navy was arranged. A cruise aboard the unique search and recovery vessel Alcoa Seaprobe was made to the wreck site in April of 1974 under the command of Commander Colin Jones. A rigidly con-

trolled &quot;pod&quot; scanned the wreck and made hundred of still photos of small areas of the wreck. Several months would be needed to construct a photomosaic of these many ph.otographs, like piecing together of a giant jig-saw puzzle. The controllable &quot;gripper&quot; of the Alcoa Seaprobe was to be lowered to recover a piece of iron. However, because of uncertainty that this wreck was indeed the Monitor, at least in the mind of Commander Jones, the recovery of artifacts was skipped and the remainder of the Seaprobe cruise was devoted to searching for other possible wrecks which the Navy though might just as well be the Monitor. Needless to say, this disappointed Newton, who represented the original discoverers on this cruise.

Drawings of the Monitor, designed by John Ericsson and built at New York in 1861. Below, the photomosaic of the wreck taken by the Alcoa Seaprobe in April 1974.