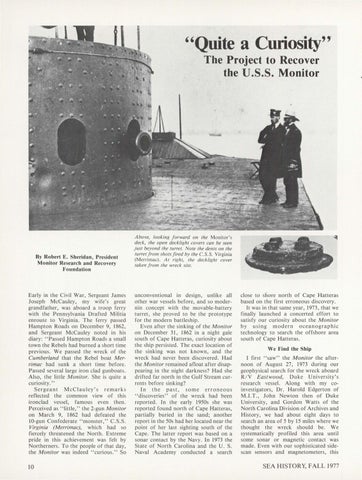 Early in the Civil War, Sergeant James Joseph McCauley, my wife&#39;s great grandfather, was aboard a troop ferry with the Pennsylvania Drafted Militia enroute to Virginia. The ferry passed Hampton Roads on December 9, 1862, and Sergeant McCauley noted in his diary: &quot;Passed Hampton Roads a small town the Rebels had burned a short time previous . We passed the wreck of the Cumberland that the Rebel boat Merrimac had sunk a short time before. Passed several large iron clad gunboats. Also, the little Monitor. She is quite a curiosity.&quot; Sergeant McClauley&#39;s remarks reflected the common view of this ironclad vessel, famous even then. Perceived as &quot;little,&quot; the 2-gun Monitor on March 9, 1862 had defeated the JO-gun Confederate &quot;monster,&quot; C.S.S. Virginia (Merrimac), which had so fiercely threatened the North. Extreme pride in this achievement was felt by Northerners. To the people of that day, the Monitor was indeed &quot;curious.&quot; So

Above, looking forward on the Monitor&#39;s deck, the open decklight covers can be seen just beyond the turret. Note the dents on the turret from shots fired by the C.S.S. Virginia (Merrimac). At right, the decklight cover taken from the wreck site.

unconventional in design, unlike all other war vessels before, and so modernin concept with the movable-battery turret, she proved to be the prototype for the modern battleship. Even after the sinking of the Monitor on December 31, 1862 in a night gale south of Cape Hatteras, curiosity about the ship persisted. The exact location of the sinking was not known, and the wreck had never been discovered. Had the Monitor remained afloat after disappearing in the night darkness? Had she drifted far north in the Gulf Stream currents before sinking? In the past, some erroneous &quot;discoveries&quot; of the wreck had been reported. In the early 1950s she was reported found north of Cape Hatteras, partially buried in the sand; another report in the 50s had her located near the point of her last sighting south of the Cape. The latter report was based on a sonar contact by the Navy. In 1973 the State of North Carolina and the U. S. Naval Academy conducted a search

close to shore north of Cape Hatteras based on the first erroneous discovery. It was in that same year, 1973, that we finally launched a concerted effort to satisfy our curiosity about the Monitor by using modern oceanographic technology to search the offshore area south of Cape Hatteras. We Find the Ship

I first &quot;saw&quot; the Monitor the afternoon of August 27, 1973 during our geophysical search for the wreck aboard R/ V Eastwood, Duke University&#39;s research vessel. Along with my coinvestigators, Dr. Harold Edgerton of M.I.T., John Newton then of Duke University, and Gordon Watts of the North Carolina Division of Archives and History, we had about eight days to search an area of 5 by 15 miles where we thought the wreck should be. We systematically profiled this area until some sonar or magnetic contact was made. Even with our sophisticated sidescan sensors and magnetometers, this