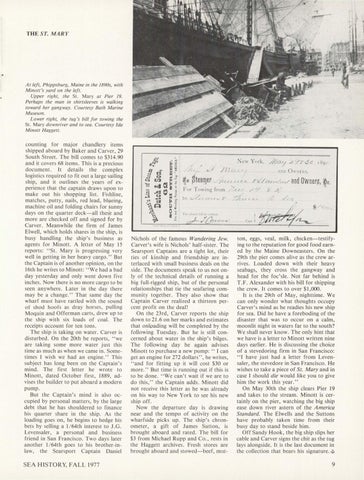 At left, Phippsburg, Maine in the 1890s, with Mino/l&#39;s yard on the left. Upper right, the St. Mary al Pier 19. Perhaps the man in shirtsleeves is walking toward her gangway. Courtesy Bath Marine Museum. Lower right, the /ug&#39;s bill for lowing the St. Mary downriver and to sea. Courtesy Ida Minott Haggett.

counting for major chandlery items shipped aboard by Baker and Carver, 29 South Street. The bill comes to $314.90 and it covers 68 items. This is a precious document. It details the complex logistics required to fit out a large sailing ship, and it outlines the years of experience that the captain draws upon to make out his shopping list. Fishline, matches, putty, nails, red lead, blueing, machine oil and folding chairs for sunny days on the quarter deck-all thes~ and more are checked off and signed for by Carver. Meanwhile the firm of James Elwell, which holds shares in the ship, is busy handling the ship&#39;s business as agents for Minott. A letter of May 15 reports: &quot;St. Mary is progressing very well in getting in her heavy cargo.&quot; But the Captain is of another opinion, on the 16th he writes to Minott: &quot;We had a bad day yesterday and only went down five inches. Now there is no more cargo to be seen anywhere. Later in the day there may be a change.&quot; That same day the wharf must have rattled with the sound of shod hoofs as dray horses, pulling Moquin and Offerman carts, drew up to the ship with six loads of coal. The receipts account for ten tons. The ship is taking on water. Carver is disturbed. On the 20th he reports, &#39;&#39;we are taking some more water just this time as much as when we came in. Sometimes I wish we had an engine.&quot; This subject has long been on the Captain&#39;s mind. The first letter he wrote to Minott, dated October first, 1889, advises the builder to put aboard a modern pump. But the Captain&#39;s mind is also occupied by personal matters, by the large debt that he has shouldered to finance his quarter share in the ship. As the loading goes on, he begins to hedge his bets by selling a l / 64th interest to J.G . Levensaler, a personal and business friend in San Francisco. Two days later another I / 64th goes to his brother-inlaw, the Searsport Captain Daniel

/lji:r~ Nichols of the famous Wandering Jew. Carver&#39;s wife is Nichols&#39; half-sister. The Searsport Captains are a tight lot, their ties of kinship and friendship are interlaced with small business deals on the side. The documents speak to us not only of the technical details of running a big full-rigged ship, but of the personal relationships that tie the seafaring community together. They also show that Captain Carver realized a thirteen percent profit on the deal! On the 23rd, Carver reports the ship down to 21.6 on her marks and estimates that onloading will be completed by the following Tuesday. But he is still concerned about water in the ship&#39;s bilges. The following day he again advises Minott to purchase a new pump: &quot; I can get an engine for 272 dollars&quot;, he writes, &quot;and for fitting up it will cost $30 or more.&quot; But time is running out if this is to be done. &quot;We can&#39;t wait if we are to do this,&quot; the Captain adds. Minott did not receive this letter as he was already on his way to New York to see his new ship off. Now the departure day is drawing near and the tempo of activity on the wharfside picks up. The ship&#39;s chronometer, a gift of James Sutton, is brought aboard and rated. The bill for $3 from Michael Rupp and Co., rests in the Haggett archives. Fresh stores are brought aboard and stowed-beef, mut-

ton, eggs, veal, milk, chicken-testifying to the reputation for good food earned by the Maine Downeasters. On the 29th the pier comes alive as the crew arrives. Loaded down with their heavy seabags, they cross the gangway and head for the foc&#39;sle. Not far behind is T.F. Alexander with his bill for shipping the crew. It comes to over $1,000. It is the 29th of May, nighttime. We can only wonder what thoughts occupy Carver&#39;s mind as he readies his new ship for sea. Did he have a foreboding of the disaster that was to occur on a calm, Âˇmoonlit night in waters far to the south? We shall never know. The only hint that we have is a letter to Minott written nine days earlier. He is discussing the choice of a stevedoring firm in San Francisco: &quot;I have just had a letter from Levensaler, the stevedore in San Francisco. He wishes to take a piece of St. Mary and in case I should die would like you to give him the work this year.&quot; On May 30th the ship clears Pier 19 and takes to the stream. Minott is certainly on the pier, watching the big ship ease down river astern of the America Standard. The Elwells and the Suttons have probably taken time from their busy day to stand beside him. Off Sandy Hook, the big ship slips her cable and Carver signs the chit as the tug lays alongside. It is the last document in the collection that bears his signature. w