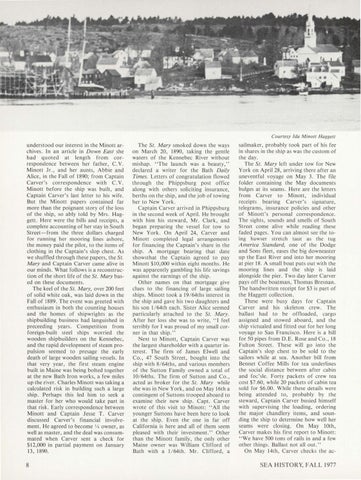 understood our interest in the Minott archives. In an article in Down East she had quoted at length from correspondence between her father, C.V. Minott Jr., and her aunts, Abbie and Alice, in the Fall of 1890; from Captain Carver&#39;s correspondence with C. V. Minott before the ship was built, and Captain Carver&#39;s last letter to his wife. But the Minott papers contained far more than the poignant story of the loss of the ship, so ably &#39;told by Mrs. Haggett. Here were the bills and receipts, a complete accounting of her stay in South Street-from the three dollars charged for running her mooring lines ashore, the money paid the pilot , to the items of clothing in the Captain&#39;s slop chest. As we shuffled through these papers, the St. Mary and Captain Carver came alive in our minds. What follows is a reconstruction of the short life of the St. Mary based on these documents. The keel of the St. Mary, over 200 feet of solid white oak, was laid down in the Fall of 1889. The event was greeted with enthusiasm in both the counting houses and the homes of shipwrights as the shipbuilding business had languished in preceeding years. Competition from foreign-built steel ships worried the wooden shipbuilders on the Kennebec, and the rapid development of steam propulsion seemed to presage the early death of large wooden sailing vessels. In that very year, the first steam engine built in Maine was being bolted together at the new Bath Iron works, a few miles up the river. Charles Minott was taking a calculated risk in building such a large ship. Perhaps this led him to seek a master for her who would take part in that risk. Early correspondence between Minott and Captain Jesse T. Carver discussed Carver&#39;s financial involvement. He agreed to become Y4 owner, as well as master, and the deal was consummated when Carver sent a check for $12,000 in partial payment on January 13, 1890.

The St. Mary smoked down the ways on March 20, 1890, taking the gentle waters of the Kennebec River without mishap. &quot;The launch was a beauty,&quot; declared a writer for the Bath Daily Times. Letters of congratulation flowed through the Phippsburg post office along with others soliciting insurance, berths on the ship , and the job of towing her to New York. Captain Carver arrived in Phippsburg in the second week of April. He brought with him his steward, Mr. Clark, and began preparing the vessel for tow to New York . On April 24, Carver and Minott completed legal arrangements for financing the Captain&#39;s share in the ship . A mortgage bearing that date showsthat the Captain agreed to pay Minott $10,000 within eight months. He was apparently gambling his life savings against the earnings of the ship . Other names on that mortgage give clues to the financing of large sailing ships. Minott took a l 9/64ths interest in the ship and gave his two daughters and his son I /64th each. Sister Alice seemed particularly attached to the St. Mary. After her loss she was to write, &quot; I feel terribly for I was proud of my small corner in that ship.&quot; Next to Minott, Captain Carver was the largest shareholder with a quarter interest. The firm of James Elwell and Co., 47 South Street, bought into the ship with 8/ 64ths, and various members of the Sutton Family owned a total of 10/ 64ths. The firm of Sutton and Co., acted as broker for the St. Mary while she was in New York, and on May 16th a contingent of Suttons trooped aboard to examine their new ship. Capt. Carver wrote of this visit to Minott: &quot;All the younger Suttons have been here to look at the ship. Even the one in far off California is here and all of them seem pleased with their investment.&quot; Other than the Minott family, the only other Maine owner was William Clifford of Bath with a l / 64th. Mr. Clifford, a

sailmaker, probably took part of his fee in shares in the ship as was the custom of the day. The St. Mary left under tow for New York on April 28, arriving there after an uneventful voyage on May 3. The file folder containing the May documents bulges at its seams. Here are the letters from Carver to Minott, individual receipts bearing Carver&#39;s signature, telegrams, insurance policies and other of Minott&#39;s personal correspondence. The sights, sounds and smells of South Street come alive while reading these faded pages. You can almost see the toing hawser stretch taut as the tug America Standard, one of the Dodge and Sons fleet, eases the big downeaster up the East River and into her mooring at pier 18 . A small boat puts out with the mooring lines and the ship is laid alongside the pier. Two day later Carver pays off the boatman, Thomas Bresnan . The handwritten receipt for $3 is part of the Haggett collection. These were busy days for Captain Carver and his skeleton crew. The ballast had to be offloaded, cargo assigned and stowed aboard, and the ship victualed and fitted out for her long voyage to San Francisco. Here is a bill for 50 pipes from D.E. Rose and Co., 18 Fulton Street. These will go into the Captain&#39;s slop chest to be sold to the sailors while at sea. Another bill from Bennet Coffee Mills for tea underlines the social distance between after cabin and foc&#39;sle. Forty packets of crew tea cost $7.60, while 20 packets of cabin tea sold for $6.00. While these details were being attended to, probably by the steward, Captain Carver busied himself with supervising the loading, ordering the major chandlery items, and sounding the ship to determine how well her seams were closing. On May 10th, Carver makes his first report to Minott : &quot;We have 500 tons of rails in and a few other things. Ballast not all out.&quot; On May 14th, Carver checks the ac-