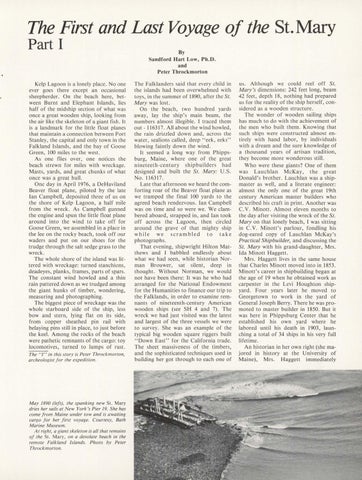 The First and Last Voyage of the St. Mary Part I

Kelp Lagoon is a lonely place. No one ever goes there except an occasional sheepherder. On the beach here, between Burnt and Elephant Islands, lies half of the midship section of what was once a great wooden ship, looking from the air like the skeleton of a giant fish. It is a landmark for the little float planes that maintain a connection between Port Stanley, the capital and only town in the Falkland Islands, and the bay of Goose Green, 100 miles to the west. As one flies over, one notices the beach strewn for miles with wreckage. Masts, yards, and great chunks of what once was a great hull. One day in April 1976, a DeHaviland Beaver float plane, piloted by the late Ian Campbell, deposited three of us on the shore of Kelp Lagoon, a half mile from the wreck. As Campbell gunned the engine and spun the little float plane around into the wind to take off for Goose Green, we assembled in a place in the lee on the rocky beach, took off our waders and put on our shoes for the trudge through the salt sedge grass to the wreck. The whole shore of the island was littered with wreckage: turned stanchions, deadeyes, planks, frames, parts of spars. The constant wind howled and a thin rain pattered down as we trudged among the giant hunks of timber, wondering, measuring and photographing. The biggest piece of wreckage was the whole starboard side of the ship, less bow and stern, lying flat on its side, from copper sheathed pin rail with belaying pins still in place, to just before the keel. Among the rocks of the beach were pathetic remnants of the cargo: toy locomotives, turned to lumps of rust. The &quot;!&quot;in this story is Peter Throckmorton, archeologist for the expedition.

May 1890 (left), the spanking new St. Mary dries her sails at New York&#39;s Pier 19. She has come from Maine under tow and is awaiting cargo for her first voyage. Courtesy, Bath Marine Museum. At right, a giant skeleton is a/I that remains of the St. Mary, on a desolate beach in the remote Falkland Islands. Photo by Peter Throckmorton.

The Falklanders said that every child in the islands had been overwhelmed with toys, in the summer of 1890, after the St. Mary was lost. On the beach, two hundred yards away, lay the ship&#39;s main beam, the numbers almost illegible. I traced them out - 116317. All about the wind howled, the rain drizzled down and, across the water, sealions called, deep &quot;eek, eeks&quot; blowing faintly down the wind. It seemed a long way from Phippsburg, Maine, where one of the great nineteeth-century shipbuilders had designed and built the St. Mary: U.S. No. 116317. Late that afternoon we heard the comforting roar of the Beaver float plane as we tramped the final 100 yards to the agreed beach rendezvous. Ian Campbell was on time and so were we. We clambered aboard, strapped in, and Ian took off across the Lagoon, then circled around the grave of that mighty ship while we scrambled to take photographs. That evening, shipwright Hilton Matthews and I babbled endlessly about what we had seen, while historian Norman Brouwer, sat silent, deep in thought. Without Norman, we would not have been there: It was he who had arranged for the National Endowment for the Humanities to finance our trip to the Falklands, in order to examine remnants of nineteenth-century American wooden ships (see SH 4 and 7). The wreck we had just visited was the latest and largest of the three vessels we were to survey. She was an example of the typical big wooden square riggers built &quot;Down East&quot; for the California trade. The sheet massiveness of the timbers, and the sophisticated techniques used in building her got through to each one of

us. Although we could reel off St. Mary&#39;s dimensions: 242 feet long, beam 42 feet, depth 18, nothing had prepared us for the reality of the ship herself, considered as a wooden structure. The wonder of wooden sailing ships has much to do with the achievement of the men who built them. Knowing that such ships were constructed almost entirely with hand labor, by individuals with a dream and the sure knowledge of a thousand years of artisan tradition, they become more wonderous still. Who were these giants? One of them was Lauchlan McKay, the great Donald&#39;s brother. Lauchlan was a shipmaster as well, and a literate engineer: almost the only one of the great 19th century American master builders who described his craft in print. Another was C. V. Minott. Almost eleven months to the day after visiting the wreck of the St. Mary on that lonely beach, I was sitting in C. V. Minott&#39;s parlour, fondling his dog-eared copy of Lauchlan McKay&#39;s Practical Shipbuilder, and discussing the St. Mary with his grand-daughter, Mrs. Ida Minott Haggett. Mrs. Haggett lives in the same house that Charles Minott moved into in 1853. Minott&#39;s career in shipbuilding began at the age of 19 when he obtained work as carpenter in the Levi Houghton shipyard. Four years later he moved to Georgetown to work in the yard of General Joseph Berry. There he was promoted to master builder in 1850. But it was here in Phippsburg Center that he established his own yard where he labored until his death in 1903, launching a total of 34 ships in his very full lifetime. An historian in her own right (she majored in history at the University of Maine), Mrs. Haggett immediately