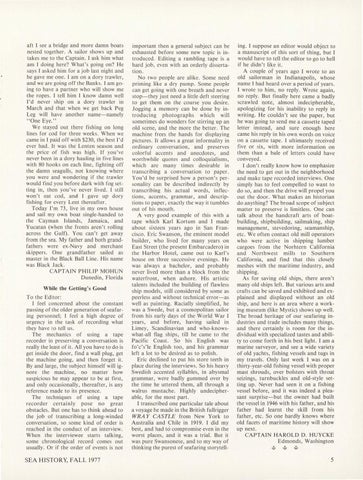 aft I see a bridge and more damn boats nested together. A sailor shows up and takes me to the Captain. I ask him what am I doing here? What&#39;s going on? He says I asked him for a job last night and he gave me one. I am on a dory trawler, and we are going off the Banks. I am going to have a partner who will show me the ropes. I tell him I know damn well I&#39;d never ship on a dory trawler in March and that when we get back Peg Leg will have another name-namely &quot;One Eye.&quot; We stayed out there fishing on long lines for cod for three weeks. When we came in I paid off with $230, the best l &#39;d ever had. It was the Lenten season and the priceÂˇ of fish was high. If you&#39;ve never been in a dory hauling in five lines with 80 hooks on each line, fighting off the damn seagulls, not knowing where you were and wondering if the trawler would find you before dark with fog setting in, then you&#39;ve never li ved. I still won&#39;t eat cod, and I gave up dory fishing for every Lent thereafter. Today I&#39;m 73, live in my own house and sail my own boat single-handed to the Cayman Islands, Jamaica, and Yucatan (when the fronts aren&#39;t rolling across the Gull). You can&#39;t get away from the sea. My father and both grandfathers were ex-Navy and merchant skippers. One grandfather sailed as master in the Black Ball Line. His name was Black Jack. CAPTAIN PHILIP MOHUN Dunedin, Florida While the Getting&#39;s Good To the Editor: I feel concerned about the constant passing of the older generation of seafaring personnel; I feel a high degree of urgency in the task of recording what they have to tell us. The mechanics of using a tape recorder in preserving a conversation is really the least of it. All you have to do is get inside the door, find a wall plug, get the machine going, and then forget it. By and large, the subject himself will ignore the machine, no matter how suspicious he may appear to be at first, and only occasionally, thereafter, is any reference made to its presence. The techniques of using a tape recorder certainly pose no great obstacles. But one has to th ink ahead to the job of transcribing a long-winded conversation, so some kind of order is reached in the conduct of an interview. When the interviewee starts talking, some chronological record comes out usually. Or if the order of events is not

important then a general subject can be exhausted before some new topic is introduced. Editing a rambling tape is a hard job, even with an orderly dissertation. No two people are alike. Some need priming like a dry pump. Some people can get going with one breath and never stop-they just need a little deft steering to get them on the course you desire. Jogging a memory can be done by introducing photographs which will sometimes do wonders for stirring up an old scene, and the more the better. The machine frees the hands for displaying pictures. It allows a great informality in ordinary conversation, and preserves colorful accents and anecdotes, and worthwhile quotes and colloquialisms, which are many times desirable in transcribing a conversation to paper. You&#39;d be surprised how a person&#39;s personality can be described indirectly by transcribing his actual words, inflections, accents, grammar, and descriptions to paper, exactly the way it tumbles out of his mouth. A very good example of this with a tape which Karl Kortum and I made about sixteen years ago in San Francisco. Eric Swanson, the eminent model builder, who lived for many years on East Street (the present Embarcadero) in the Harbor Hotel, came out to Karl&#39;s house on three successive evenings. He was always a bachelor, and probably never lived more than a block from the waterfront, when ashore. His artistic talents included the building of flawless ship models, still considered by some as peerless and without technical error-as well as painting. Racially simplified, he was a Swede, but a cosmopolitan sai lor from his early days of the World War I years, and before, having sailed in Limey, Scandinavian and who-knowswhat-all flag ships, till he came to the Pacific Coast. So his English was fo&#39;c&#39;s&#39;le English too, and his grammar left a lot to be desired as to polish. Eric declined to put his store teeth in place during the interviews. So his heavy Swedish accented syllables, in abysmal grammar, were badly gummed over by the time he uttered them, all through a walrus mustache. Highly undecipherable, for the most part. I transcribed one particular tale about a voyage he made in the British fullrigger WRAY CASTLE from New York to Australia and Chile in 1919. I did my best, and had to compromise even in the worst places, and it was a trial. But it was pure Swansonese, and to my way of thinking the purest of seafaring storytell-

ing. I suppose an editor would object to a manuscript of this sort of thing, but I would have to tell the editor to go to hell if he didn&#39;t like it. A couple of years ago I wrote to an old sailorman in Indianapolis, whose name I had heard over a period of years. I wrote to him, no reply. Wrote again, no reply. But finally here came a badly scrawled note, almost indecipherable, apologizing for his inability to reply in writing. He couldn&#39;t see the paper, but he was going to send me a cassette taped letter instead, and sure enough here came his reply in his own words on voice on a cassette tape. I ultimately received five or six, with more information on them than a bale of letters could have conveyed. I don&#39;t really know how to emphasize the need to get out in the neighborhood and make tape recorded interviews. One simply has to feel compelled to want to do so, and then the drive will propel yo u out the door. What makes an historian do anything? The broad scope of subject matter to preserve is limitless. One can talk about the handcraft arts of boatbuilding, shipbuilding, sailmaking, ship management, stevedoring, seamanship, etc. We often contact o ld mill operators who were active in shipping lumber cargoes from the Norhtern California and Northwest mills to Southern California, and find that this closely meshes with the maritime industry, and shipping. As for saving old ships, there aren&#39;t many old ships left. But various arts and crafts can be saved and exhibited and explained and displayed without an old ship, and here is an area where a working museum (like Mystic) shows up well. The broad heritage of our seafaring industries and trade includes many things, and there certainly is room for the individual with specialized tastes and ability to come forth in his best light. I am a marine surveyor, and see a wide variety of old yachts, fishing vessels and tugs in my travels. Only last week I was on a thirty-year-old fishing vessel with proper mast shrouds, over bolsters with throat seizings, turnbuckles and old-style setting up. Never had seen it on a fishing vessel before, and it was indeed a pleasant surprise-but the owner had built the vessel in 1946 with his father, and his father had learnt the ski ll from his father, etc. So one hardly knows where old facets of maritime history will show up next. CAPTAIN HAROLD D. HUYCKE Edmonds, Washington