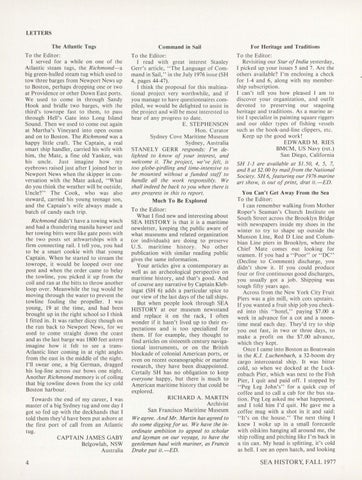 For Heritage and Traditions

To the Editor: I served for a while on one of the Atlantic steam tugs, the Richmond-a big green-hulled steam tug which used to tow three barges from Newport News up to Boston, perhaps dropping one or two at Providence or other Down East ports. We used to come in through Sandy Hook and bridle two barges, with the third&#39;s towrope fast to them, to pass through Hell&#39;s Gate into Long Island Sound. Then we used to come out again at Martha&#39;s Vineyard into open ocean and on to Boston. The Richmond was a happy little craft. The Captain, a real smart ship handler, carried his wife with him, the Mate, a fine old Yankee, was his uncle. Just imagine how my eyebrows raised just after I joined her in Newport News when the skipper in conversation with the Mate asked, &quot;What do you think the weather will be outside, Uncle?&quot; The Cook, who was also steward, carried his young teenage son, and the Captain&#39;s wife always made a batch of candy each trip.

To the Editor: I read with great interest Stanley Gerr&#39;s article, &quot;The Language of Command in Sail,&quot; in the July 1976 issue (SH 4, pages 44-47). I think the proposal for this multinational project very worthwhile, and if you manage to have questionnaires compiled, we would be delighted to assist in the project and will be most interested to hear of any progress to date. E. STEPHENSON Hon. Curator Sydney Cove Maritime Museum Sydney, Australia STANELY GERR responds: I&#39;m de-

To the Editor: Revisiting our Star of India yesterday, I picked up your issues 5 and 7. Are the others available? I&#39;m enclosing a check for 1-4 and 6, along with my membership subscription. I can&#39;t tell you how pleased 1 am to discover your organization, and outfit devoted to preserving our seagoing heritage and traditions. As a marine artist I specialize in painting square riggers and our older types of fishing vessels such as the hook-and-line clippers, etc. Keep up the good work! EDWARD M. RIES BMCM, US Navy (ret.) San Diego, California

Richmond didn&#39;t have a towing winch and had a thundering manila hawser and her towing bitts were like gate posts with the two posts set athwartships with a firm connecting rail. I tell you, you had to be a smart cookie with that young Captain. When he started to stream the towrope, it would be looped over one post and when the order came to belay the towline, you picked it up from the coil and ran at the bitts to throw another loop over. Meanwhile the tug would be moving through the water to prevent the towline fouling the propeller. I was young, 19 at the time, and had been brought up in the right school so I think I fitted in. It was rather dicey though on the run back to Newport News, for we used to come straight down the coast and as the last barge was 1800 feet astern imagine how it felt to see a transAtlantic liner coming in at right angles from the east in the middle of the night. I&#39;ll swear one, a big German, dragged his log-line across our bows one night. Another Richmond memory is of coiling that big towline down from the icy cold Boston harbour. Towards the end of my career, I was master of a big Sydney tug and one day I got so fed up with the deckhands that I told them they&#39;d have been put ashore at the first port of call from an Atlantic tug. CAPTAIN JAMES GABY Belgowlah, NSW Australia

lighted to know of your interest, and welcome it. The project, we&#39;ve felt, is too globe-girdling and time-intensive to be mounted without a funded staff to handle al/ the work responsibly. We sha// indeed be back to you when there is any prof!,ress in this to report. Much To Be Explored To the Editor: What I find new and interesting about SEA HISTORY is that it is a maritime newsletter, keeping th~ public aware of what museums and related organization (or individuals) are doing to preserve U.S. maritime history. No other publication with similar reading public gives the same information. Your articles give a contemporary as well as an archeological perspective on maritime history, and that&#39;s good. And of course any narrative by Captain Klebingat (SH 6) adds a particular spice to our view of the last days of the tall ships. But when people look through SEA HISTORY at our museum newsstand and replace it on the rack, I often wonder if it hasn&#39;t lived up to their expectations and is too specialized for them. If for example, they thought to find articles on sixteenth century navigational instruments, or on the British blockade of colonial American ports, or even on recent oceanographic or marine research, they have been disappointed. Certaily SH has no obligation to keep everyone happy, but there is much to American maritime history that could be explored. RICHARD A. MARTIN Archivist San Francisco Maritime Museum

We agree. And Mr. Martin has agreed to do some digging for us. We have the inordinate ambition to appeal to scholar and layman on our voyage, to have the gentleman haul with mariner, as Francis Drake put it. -ED.

SH 1-3 are available at $1.50, 4, 5, 7, and 8 at $2. 00 by mail from the National Society. SH 6, featuring our 1976 marine art show, is out of print, drat it.-ED. You Can&#39;t Get Away From the Sea To the Editor: I can remember walking from Mother Roper&#39;s Seaman&#39;s Church Institute on South Street across the Brooklyn Bridge with newspapers inside my shoes in the winter to try to shape up outside the Munson Line, Red D Line and Columbian Line piers in Brooklyn, where the Chief Mate comes out looking for seamen. If you had a &quot;Poor&quot; or &quot;DC&quot; (Decline to Comment) discharge, you didn&#39;t show it. If you could produce four or five continuous good discharges, you usually got a job. Shipping was tough fifty years ago. Across from the New York City Fruit Piers was a gin mill, with cots upstairs. If you wanted a fruit ship job you checked into this &quot;hotel,&quot; paying $7 .00 a week in advance for a cot and a noontime meal each day. They&#39;d try to ship you out fast, in two or three days, to make a profit on the $7 .00 advance, which they kept. Once I came into Boston as Boatswain in the K.I. Luchenbach, a 32-boom dry cargo intercoastal ship. It was bitter cold, so when we docked at the Luckenbach Pier, which was next to the Fish Pier, I quit and paid off. I stopped by &quot;Peg Leg John&#39;s&quot; for a quick cup of coffee and to call a cab for the bus station. Peg Leg asked me what happened, and I told him I&#39;d quit. He gave me a coffee mug with a shot in it and said: &quot;It&#39;s on the house.&quot; The next thing I knew I woke up in a small forecastle with oilskins hanging all around me, the ship rolling and pitching like I&#39;m back in a tin can. My head is splitting, it&#39;s cold as hell. I see an open hatch, and looking