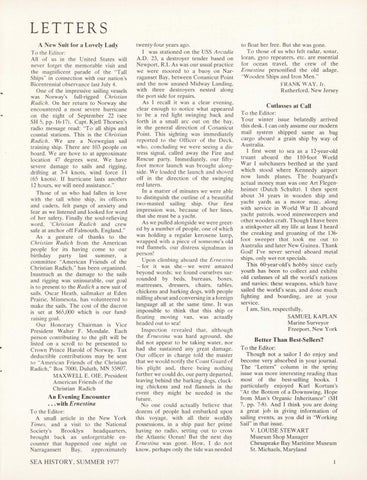 LETTERS A New Suit for a Lovely Lady To the Editor: All of us in the United States will never forget the memorable visit and the magnificent parade of the &quot;Tall Ships&quot; in connection with our nation&#39;s Bicentennial observance last July 4. One of the impressive sailing vessels was Norway&#39;s full-rigged Christian Radich. On her return to Norway she encountered a most severe hurricane on the night of September 22 (see SH 5, pp. 16-17). Cc,lpt. Kjell Thorsen&#39;s radio message read: &quot;To all ships and coastal stations. This is the Christian Radich. We are a Norwegian sail training ship. There are 103 people on board. We are hove to at approx.imate location 47 degrees west. We have severe damage to sails and rigging, drifting at 3-4 knots, wind force 11 (65 knots) . If hurricane lasts another 12 hours, we will need assistance. &quot; Those of us who had fallen in love with the tall white ship , its officers and cadets, felt pangs of anxiety and fear as we listened and looked for word of her safety. Finally the soul-relieving word , .. Christian Radich and crew safe at anchor off Falmouth, England.&quot; As a gesture of thanks to the Christian Radich from the American people for its having come to our birthday party last summer, a committee &quot;American Friends of the Christian Radich, &quot; has been organized. Inasmuch as the damage to the sails and rigging was uninsurable , our goal is to present to the Radich a new suit of sails. Oscar Heath , sailmaker at Eden Prairie , Minnesota, has volunteered to make the sails. The cost of the dacron is set at 565,000 which is our fundraising goal. Our Honorary Chairman is Vice President Walter F. Mondale. Each person contributing to the gift will be listed on a scroll to be presented to Crown Prince Harold of Norway. Tax deductible contributions may be sent to &quot;American Frie nds of the Christian Radich ,&quot; Box 7000, Duluth , MN 55807. MAXWELL E. OIE , President American Friends of the Christian Radich

An Evening Encounter ... with Ernestina To the Editor: A small article in the New York Times, a nd a visit to the National headquarters, Society&#39;s Brooklyn brought back an unforgettable encounter that happe ned o ne night on Narragansett Bay, a pproximately

twenty-four years ago. I was stationed on the USS Arcadia A.O. 23, a destroyer tender based on Newport, R.I. As was our usual practice we were moored to a buoy on Narraganset Bay, between Conanicut Point and the now unused Midway Landing, with three destroyers nested along the port side for repairs . As I recall it was a clear evening, clear enough to notice what appeared to be a red light swinging back and forth in a small arc out on the bay, in the general direction of Conanicut Point. This sighting was immediately repo rted to the Officer of the Deck , who, concluding we were seeing a distress signal, called away the Fire and Rescue party. Immediately, our fiftyfoot motor launch was brought alongside. We loaded the laun ch and shoved off in the direction of the swinging red latern. In a matter of minutes we were able to distinguish the outline of a beautiful two-masted sailing ship. Our first impression was, because of her lines, that she must be a yacht. As we pulled alongside we were greeted by a number of people, one of which was holding a regular kerosene lamp, wrapped with a piece of someone&#39;s old red flannels , o ur distress signalman in person! Upon climbing aboard the Ernes1ina - for it was she - we were amazed beyond words ; we found ourselves surrounded by beds, bureaus, boxes , mattresses, dressers, chairs, tables, chickens and barking dogs, with people milling about and conversing in a foreign language all at the same time. It was impossible to think that this ship or floating moving van , was actually headed out to sea! Inspection revealed that, although the Ernestina was hard aground, she did not appear to be taking water, nor had she sustained any great damage. Our officer in charge told the master that we would notify the Coast Guard of his plight and, there being nothing further we could do, our party departed , leaving behind the barking dogs, clucking chickens and red flannels in the event they might be needed in the future. No one could actually believe that dozens of people had embarked upon this voyage, with all their worldly possessions, in a ship past her prime having no radio, setting out to cross the Atlantic Ocean! But the next day Ernestina was gone. How, I do not know , perhaps only the tide was needed

to float her free. But she was gone. To those of us who felt radar, sonar, loran , gyro repeaters, etc. are essential for ocean travel, the crew of the Ernestina personified the old adage, &quot;Wooden Ships and Iron Men .&quot; FRANK WAY, Jr. Rutherford, New Jersey

Cutlasses at Call To the Editor: Your winter issue belatedly arrived this desk . I can only assume our modern mail system shipped same as bag cargo aboard a grain ship by way of Australia. I first went to sea as a 12-year-old truant aboard the 110-foot World War I subchasers berthed at the yard which stood where Kennedy airport now lands planes. The boatyard&#39;s actual money man was one Art Flegenheimer (Dutch Schultz). I then spent about 34 years in wooden ship and yacht yards as a motor mac, along with service in World War II aboard yacht patrols, wood minesweepers and other wooden craft. Though I have been a stinkpotter all my life at least I heard the creaking and groaning of the 136foot sweeper that took me out to Australia and later New Guinea. Thank God! I&#39;ve never served aboard metal ships, only wet-rot specials. This 60-year-old&#39;s hobby since early youth has been to collect and exhibit old cutlasses of all the world &#39;s nations and navies; these weapons, which have sailed the world &#39;s seas, and done much fighting and boarding, are at your service. I am, Sirs, respectfully, SAMUEL KAPLAN Marine Surveyor Freeport, New York

Better Than Best-Sellers? To the Editor: Though not a sailor I do enjoy and become very absorbed in your journal. The &quot;Letters&quot; column in the spring issue was more interesting reading than most of the best-selling books. I particularly enjoyed Karl Kortum&#39;s &quot;At the Bottom of a Downswing, Hope from Man&#39;s Organic Inheritance&quot; (SH 7, pp. 7-8). And I think you are doing a great job in giving information of sailing events, as you did in &quot;Working Sail&quot; in that issue . V. LOUISE STEWART Museum Shop Manager Chesapeake Bay Maritime Museum St. Michaels, Maryland