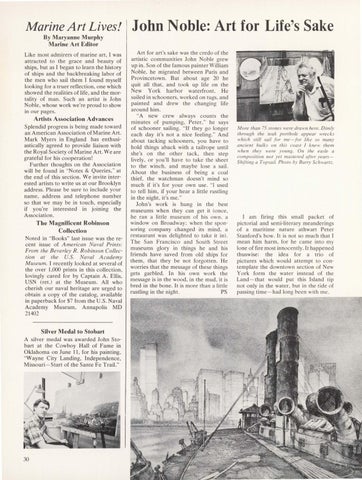 By Maryanne Murphy Marine Art Editor Like most admirers of marine art, I was attracted to the grace and beauty of ships, but as I began to learn the history of ships and the backbreaking labor of the men who sail them I found myself looking for a truer reflection, one which showed the realities of life, and the mortality of man. Such an artist is John Noble, whose work we&#39;re proud to show in our pages.

Artists Association Advances Splendid progress is being made toward an American Association of Marine Art. Mark Myers in England has enthusiastically agreed to provide liaison with the Royal Society of Marine Art.We are grateful for his cooperation! Further thoughts on the Association will be found in &quot;Notes &amp; Queries,&quot;&#39; at the end of this section. We invite interested artists to write us at our Brooklyn address. Please be sure to include your name, address and telephone number so that we may be in touch, especially if you&#39;re interested in joining the Association .

The Magnificent Robinson Collection Noted in &quot;Books&quot; last issue was the recent issue of American Naval Prints: From the B everley R . R obinson Collection at the U.S. Naval Academy Museum. I recently looked at several of the over 1,000 prints in this collection, lovingly cared for by Captain A. Ellis, USN (ret. ) at the Museum. All who cherish our naval heritage are urged to obtain a copy of the catalog, available in paperback for $7 from the U.S. Naval Academy Museum , Annapolis MD 21402

Silver Medal to Stobart A silver medal was awarded John Stobart at the Cowboy Hall of Fame in Oklahoma on June 11, for his painting, &quot;Wayne City Landing, Independence, Missouri -S tart of the Sante Fe Trail.&quot;

Art for art&#39;s sake was the credo of the artistic communities John Noble grew up in . Son of the famous painter William Noble, he migrated between Paris and Provincetown. But about age 20 he quit all that, and took up life on the New York harbor waterfront. He sailed in schooners, worked on tugs, and painted and drew the changing life around him. &quot;A new crew always counts the minutes of pumping, Peter, &quot; he says of schooner sailing. &quot; If they go lo nger each day it&#39;s not a nice feeling. &quot; And about tacking schooners, you have to hold things aback with a tailrope until she&#39;s on the other tack, then step lively, or you&#39;ll have to take the sheet to the winch, and maybe lose a sail. About the business of being a coal thief, the watchman doesn&#39;t mind so much if it&#39;s for your own use. &quot;I used to tell him, if your hear a little rustling in the night, it&#39;s me. &quot; John&#39;s work is hung in the best museums when they can get it (once, he ran a little museum of his ow n, a window on Broadway ; when the sponsoring company changed its mind , a restaurant was delighted to take it in). The San Francisco and South Street museums glory in things he and his friends have saved from old ships for them , that they be not forgotten. He worries that the message of these things gets garbled. In his own work the message is in the wood , in the mud , it is bred in the bone. It is more than a little PS rustling in the night.

More than 75 stones we re dra\\&quot;n here. Dimly through the leak po rth ole appear wrecks which still sail for me-for like so many ancient hulks on this coast I kne 11â&amp;#x20AC;˘ the m whe n they were young. On the easle a composilion no/ yet mastered a/fer yearsSlufling a Topsail. Ph oto by Bany Scl111&quot;artz.

I am firing this small packet of pictorial and semi-literary meanderings of a maritime nature at hwart Peter Stanford &#39;s bow. It is not so much that I mean him harm, for he came into my lone of fire most innocently. It happened thuswise: the idea for a trio of pictures which would atte mpt to contemplate the downtown section of New York form the water instead of the Land - that would put this Island tip not on ly in the water, but in the tide of passing time - had long been with me.