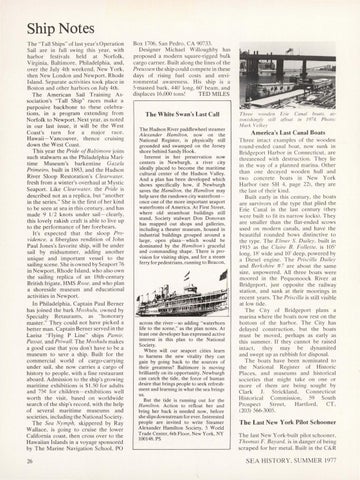 Ship Notes The &quot;Tall Ships&#39;&#39; of last year&#39;s Operation Sail are in full swing this year, with harbor festivals held at Norfolk, Virginia , Baltimore , Philadelphia, and, over the July 4th weekend , New York, then New London and Newport, Rhode Island. Separate activities took place in Bosto n and other harbors on July 4th . The American Sail Training Association&#39;s &quot;Tall Ship&quot; races make a purposive backbone to these celebrations, in a program extending from Norfolk to Newport. Next year, as noted in our last issue, it will be the West Coast&#39;s turn for a major ra ce . Hawaii - Vancouver, thence cruising down the West Coast. This year the Pride of Baltimore joins such stalwarts as the Philadelphia Maritime Museum&#39;s barkentine Gaze/a Primeiro, built in 1883, and the Hudson River Sloop Restoration &#39;s Clear1Vater, fresh from a winter&#39;s overhaul at Mystic Seaport. Like Clearwater, the Pride is described not as a replica, but &#39;Âˇa nother in the series.&quot; She is the first of her kind to be seen at sea in this century, and has made 9 1/2 knots under sail-clearly, this lovely rakish craft is able to live up to the performance of her forebears. It&#39;s expected that the sloop Providence, a fiberglass rendition o f John Paul Jones&#39;s favorite ship, will be under sail by midsummer, adding another unique and important vessel to the sailing scene. She is owned by Seaport 76 in Newport, Rhode Island , who also own the sailing replica of an 18th-century British frigate , HMS Rose, and who plan a shoreside museum and educational activities in Newport. In Philadelphia, Captain Paul Berner has joined the bark Moshulu. owned by Specialty Retaurants, as &quot;honorary master. &quot; They could not have picked a better man. Captain Berner served in the Laeisz &quot;Flying P Line&quot; ships Pamir, Passat, and Priwall. The Moslwlu makes a good case that you don&#39;t have to be a museum to save a ship. Built for the commercial world of cargo-carrying under sail, she now carries a cargo of history to people , with a fine restaurant aboard. Admission to the ship&#39;s growing maritime exhibitio ns is $1.50 for adu lts and 75cr, for ch ildren-exhibitions we ll worth the visit, based on worldwide search of the ship&#39;s record, with the help of several maritime museums and societies, including the Nationa l Soc iety. The Sea Nymph, skippered by Ray Wallace, is going to cruise the lower Cali fornia coast, then cross over to the Hawaiian Islands in a voyage sponsored by The Marine Navigation School, PO 26

Box 1706. San Pedro, CA 90733. Designer Michael Willoughby has proposed a modern square-rigged bulk cargo earner. Built along the lines of the Preussen the ship could co mpete in these days of rising fuel cos ts and environmental awareness. His ship is a 5-masted bark, 440&#39; long, 60&#39; beam , and displaces 16,000 tons! TED MILES

The White Swan&#39;s Last Call The Hudson River paddlewheel steamer A lexander Hamilton, now on the National Register, is physically still grounded and swamped o n the Jersey shore behind Sandy Hook. Interest in her preservation now centers in Newburgh, a river city ideally placed to become the maritime cultural center of the Hudso n Valley. And a plan has been developed which shows specifically how , if Newburgh saves the Harru.lton , the Hamilton may help save the rundown city waterfrontonce one of the more important seaport waterfronts of America. At First Street, where old steamboat buildings still stand, Society stalwart Don Donova n has mapped out shops and galleries, including a theater museum, housed in industrial buildings grouped around a large, open plaza- which would be dominated by the Hamilton &#39;s graceful and commanding shape. There is provision for visiting ships, and for a steam ferry for pedestrians, running to Beacon,

across the river -so adding &quot;waterborn life to the scene,&quot; as the plan notes. At least one developer has expressed active interest in this plan to the National Society. When will our seaport cities learn to harness the new vitality they can gain by going back to the sources of their greatness? Baltimore is moving brilliantly on its opportunity. Newburgh can catch the tide, the force of human desire that brings people to seek refreshment and learning in what the sea brings us. But the tide is running out for \he Hamilton. Action to refloat her and bring her back is needed now , before she slips downstream for ever. Interested people are invited to write Steamer Alexander Hamilton Society, 5 World Trade Center, 6th Floor, New York, NY 100148. PS

America&#39;s Last Canal Boats Three intact examples of the wooden rou nd- ended canal boat, now sunk in Bridgeport Harbor in Connecticut, are threate ned with destruction. They lie in th e way of a planned marina. Other than one decayed wooden hull and two concrete boats in New York H arbo r (see SH 4, page 22), they are the last of their kind. Built early in this cent ury , the boats are survivors of the type that plied the Erie Canal in the last century (t hey we re built to fit its narrow locks). They are smaller than the flat-ended scows use d o n mode rn ca nals , and have the beautiful rou nded bows distinctive to the type. The Elm.er S. Dailey, built in 1915 as the Claire B. Follette, is 105&#39; long, 18&#39; wide and 10&#39; deep, powered by a Diesel engine. The Priscilla Dailey and Berkshire # 7 are about the same size, unpowered. All three boats were moored in the Pequonoock River at Bridgeport, just opposite the railway station , and sank at their moorings in recent years. The Priscilla is still visible at low tide. The City of Bridgeport plans a marina where the boats now rest on the bottom of the harbor. The City has delayed construction, but the boats must be moved, perhaps as early as this summer. If they cannot be raised intact, they may be dynamited and swept up as rubbish for disposal. The boats have been nominated to the National Register of Historic Pl aces, and museums and historical societ ies that might take on one or more of them are being sought by Clark J. Strickland, Connecticut Historical Commission, 59 South Prospect Street, Hartford , CT, (203) 566-3005.

Thomas F. Bayard, is in danger of being scraped for her metal. Built in the C&amp;R