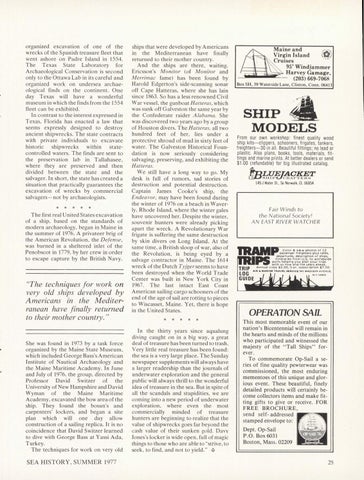 organized excavation of one of the wrecks of the Spanish treas ure fl eet that went as hore on Padre Island in 1554. The Texas State Laboratory for Arc haeological Conservation is second o nly to the Ottawa Lab in its careful and organized work on undersea archaeo logical finds on the continent. One day Texas wi ll have a wonderful museum in which the finds from the 1554 fleet can be exhibited . In contrast to the interest expressed in Texas, F lorida has enacted a law that seems expressly designed to destroy ancient shipwrecks. The state contracts with private individuals to excavate historic shipwrecks within statecontrolled waters. The finds are sent to the preservation lab in Tallahasee, where they are preserved and then divided between the state and the salvager. l n short, the state has created a situation that practicall y guarantees the excavation of wrecks by commercial salvagers - not by archaeologists.

* * * * * The first real United States excavat ion of a ship , based on the standards of modern arc haeology, began in Maine in the summ er of 1976. A privateer brig of the American Revolution, the Defense, was burned in a she ltered inlet of the Penobscot in 1779, by he r crew in order to escape capture by the British Navy.

&quot;The techniques for work on very old ships developed by Americans in the Mediterranean have finally returned to their mother country. &quot;

She was fo und in 1973 by a task force organ ized by the Maine State Museum , which included George Bass&#39;s American Institute of Nautical Archaeology and the Maine Maritime Academy. In June and July of 1976, the gro up , directed by Professor David Switzer of the Un iversity of New Hampshire and David Wyman of the Maine Maritime Academy, excavated the bow area of the sh ip. They found the bosun &#39;s and carpenters&#39; lockers, and began a site plan which will o ne day allow construction of a sailing replica. It is no coin cide nce that David Switzer learned to dive with Geo rge Bass at Yassi Ada, Turkey. The techniques for work on very o ld

ships that were developed by Americans in the Mediterranean have finally returned to their mother country. And the ships are there, waiting. Ericsson&#39;s Monitor (of Monitor and Merrimac fame) has been found by Harold Edgerton &#39;s side-scanning sonar off Cape Hatteras, where she has lain since 1863. So has a less renowned Civil War vessel, the gunboat Hatteras, which was sunk off Galveston the same year by the Confederate raider Alabama. She was discovered two years ago by a group of Houston divers. The Hatteras, all two hundred feet of her, lies under a protective shroud of mud in sixty feet of water. The Galvesto n Historical Foundation is now seri ously considering salvaging, preserving, and exh ibiting the Hatteras. We still have a long way to go. My desk is full of rumors, sad stories of destruction and potential destruction. Captain James Cooke&#39;s ship, the Endeavor, may have been found during the winter of 1976 on a beach in Waverly, Rhode Island , where the winter gales have uncovered her. Despite the winter, souvenir hunters were already picking apart the wreck. A Revolutionary War frigate is suffering the same destruction by ski n divers on Long Island. At the same time, a British sloop of war, also of the Revolution , is being eyed by a salvage contractor in Maine. The 1614 wreck of the Dutch Tyjgerseems to have been destroyed when the World Trade Center was built in New York C ity in 1967. The last intact East Coast American sailing cargo schooners of the end of the age of sail are rotting to pieces to Wiscasset, Maine. Yet, there is hope in the Un ited States.

* * * * * In the thirty years since aqualung diving caught on in a big way, a great deal of treasure has been turned to trash. Very little real treasure has been found: the sea is a very large place. The Sunday newspaper supplements will always have a larger readership than the journals of underwater exploration and the general public will always thrill to the wonderful idea of treasure in the sea. But in spite of all the scandals and stupidities, we are coming into a new period of underwater exploration , where eve n the most comm·ercially minded of treasure hunters are beginning to realize that the value of shipwrecks goes far beyond the cash value of the ir sunken go ld. Davy Jones&#39;s locker is wide open, full of magic things to those who a re ab le to &quot;strive, to seek, to find , and not to yield .&quot; .t

OPERATION SAIL This most memorable event of our nation&#39;s Bicentennial will remain in the hearts and minds of the millions who participated and witnessed the majesty of the &quot;Tall Ships&quot; forever. To commemorate Op-Sail a series of fine quality pewterwear was commissioned, the most enduring mementoes of this unique and glorious event. These beautiful, finely detailed products will certainly become collectors items and make fitting gifts to give or receive. FOR FREE BROCHURE, send self- addressed --~~~-­ stamped envelope to: Dept. Op-Sail P.O. Box 6031 Boston, Mass. 02209