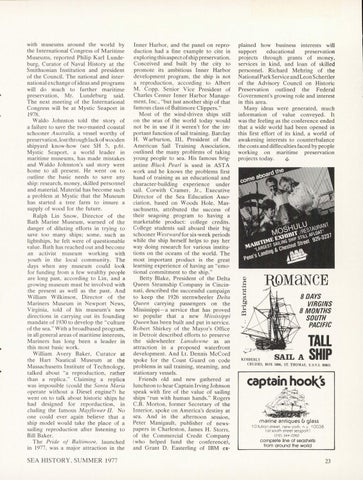 with museums around the world by the International Congress of Maritime Museums, reported Philip Karl Lundeburg, Curator of Naval History at the Smithsonian Institution and president of the Council. The national and international exchange of ideas and programs will do much to further maritime preservation, Mr. Lundeburg said . The next meeting of the International Congress will be at Mystic Seaport m 1978. Waldo Jo hn ston told the story of a failure to save the two-masted coastal schooner Australia, a vessel worthy of preservation, lost through lack of wooden shipyard know-how (see SH 5, p.6). Mystic Seaport, a world leader in maritime museums, has made mistakes and Wal do Johnston &#39;s sad story went home to all present. He went o n to outline the basic needs to save any sh ip : research, money, skilled personnel and material. Material has become such a problem at Mystic that the Museum has started a tree farm to insure a supply of wood for the future . Ralph Lin Snow , Director of the Bath Marine Muse um , warned of the danger of diluting efforts in trying to save too many sh ips; some, such as lightships, he felt were of questionable value. Bath has reached out and become an act1v1st museum working with youth in the local commun ity. The days when any museum could look for funding from a few wealthy people are long past, accordi ng to Lin, a nd a growing museum must be involved with the present as well as the past. And William Wilkinson , Director of the Mariners Museum in Newport News, Vi rginia , told of his museum&#39;s new d irectio ns in carrying out its founding mandate of 1930 to develop the &quot;culture of the sea.&quot; With a broadbased program, in all general areas of maritime interests, Mariners has long been a leader in this most basic work. William Avery Baker, C urator at the Hart Nautical Museum at the Massachusetts Institute of Techno logy, talked abo ut &quot;a reproduction, rather than a replica.&quot; Claiming a replica was impossible (cou ld the Santa Maria operate without a Diesel e ngi ne?) he went on to talk abo ut historic ships he had designed for reporduction , in eluding the famous Mayflower II. No one could ever agai n believe that a ship model would take the place of a saili ng reproduction after listening to Bill Baker. The Pride of Baltimore, la unched in 1977, was a major attraction in the

Inner Harbor, and the panel on reproductio n had a fine example to cite in explori ng this aspect of ship preservation . Conceived and built by the city to promote its ambitious Inner Harbo r development program, the ship is not a reproduction, according to Albert M. Copp, Senior Vice President of Charles Center Inner Harbor Management, Inc ., &quot;but just another ship of that famous class of Baltimore Clippers.&quot; Most of the wind-driven ships still on the seas of the world today would not be in use if it weren&#39;t for the important function of sail training. Barclay H. Warburton, III, President of the American Sail Training Association , o utlined the many problems of taking young people to sea. His famous brigantine Black Pearl is used in AST A work and he knows the problems first hand of training as an educational and character-building experience under sail. Corwith Cramer, Jr. , Executive Director of the Sea Education Association , based on Woods Hole, Massachusetts, attributed the success of their seagoing program to having a marketable product: college credits. College students sail aboard their big schooner Westward for six-week periods while the ship herself helps to pay her way doing research for various institutions on the oceans of the world. The most important product is the great learning experience of having a n &quot;emotional commitment to the ship. &quot; Betty Blake, President of the Delta Queen Steamship Company in Cincinnati , described the successful campaign to keep the 1926 sternwheeler Delta Queen carrying passengers on the Mississippi- a service that has proved so popular that a new Mississippi Queen has been built and put in service. Robert Shirkey of the Mayor&#39;s Office in Detroit described efforts to preserve the sidewheeler Lansdowne as an attraction in a proposed waterfront development. And Lt. Dennis McCord spoke for the Coast Guard on code problems in sail training, steaming, and stationary vessels. Friends old a nd new gathered at luncheo n to hear Captain Irving Johnson speak with fire of the value of sailing ships &quot; run with human hands.&quot; Rogers C.B. Morton, former Secretary of the Interior, spoke o n America&#39;s destiny at sea. And in the afternoo n session, Peter Manigault, publisher of newspapers in C harleston, James H. Storrs, of the Commercial C redit Company (who he lped fund the conference), and Grant D. Easterling of IBM ex-

plained how business interests will support educational prese rvation proj ects through grants of mo ney, services in kind, and loan of skilled personnel. Richard Mehring of the National Park Service and Leo n Schertler of the Advisory Council on Historic Preservatio n outlined the Federal Government&#39;s growing role and interest in this area. Many ideas were generated, much information of value conveyed. It was the feeling as the conference ended that a wide world had been opened in this first effort of its kind, a world of awakening interests to counterbalance the costs and diffeculties faced by people working on maritime preservation projects today. .t

complete line of seashells from around the world