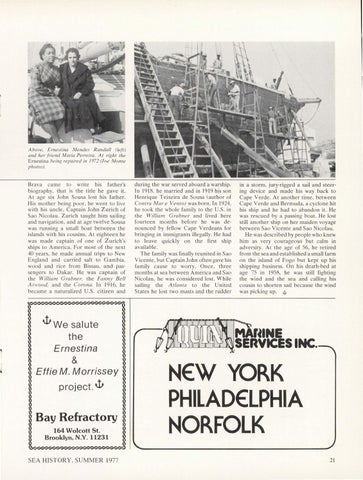 Brava came to write his fat her's biography, that is the title he gave it. At age six Jo hn Sousa lost his father. His mother being poor, he went to li ve with his un cle, Capta in John Zurich of Sao Nicolau. Zurich taught him sailing and navigation , and at age twelve Sousa was running a small boat between the islands with his cousins. At eighteen he was made capta in of o ne o f Zurich's ships to America. For most of the next 40 years, he made annual trips to New England and ca rri ed salt to Ga mbia , wood and rice from Bissau , a nd passe ngers to Dakar. H e was captain of the William Grabner, the Fanny Bell Atwood, and the Corona. In 1916, he became a naturalized U .S. citizen and

during the war served aboard a warship. In 191 8, he married and in 1919 his son Henrique Teixeira de Sousa (a utho r of Contra Mare Vento) was born. In 1924, he took the whole fami ly to the U .S . in the William Grabner and lived here fourtee n months before he was denoun ced by fellow Cape Verdeans for bringing in immigra nts illegall y. He had to leave quickly on the first ship available. The family was finally re united in Sao Vicente, but Captain John often gave his family cause to worry. Once, three months at sea between Ameri ca and Sao Nicola u, he was considered lost. While sai ling the Atlanta to the United States he lost two masts and the rudder

in a storm, jury-rigged a sail and steering device and made his way back to Cape Verde. At a nother time , between Cape Verde and Bermuda , a cyclone hit hi s ship and he had to abandon it. He was rescued by a passing boat. He lost still another ship on her maide n voyage between Sao Vicente and Sao Nicolau . He was described by people who kn ew him as very courageous but calm in adversity. At the age of 56, he retired from the sea and established a small farm o n the island of Fogo but kept up his shipping business. On his death-bed at age 75 in 1958, he was still fi ghting the wind and the sea and calling his co usin to sho rten sail because the wind was picking up. .i,